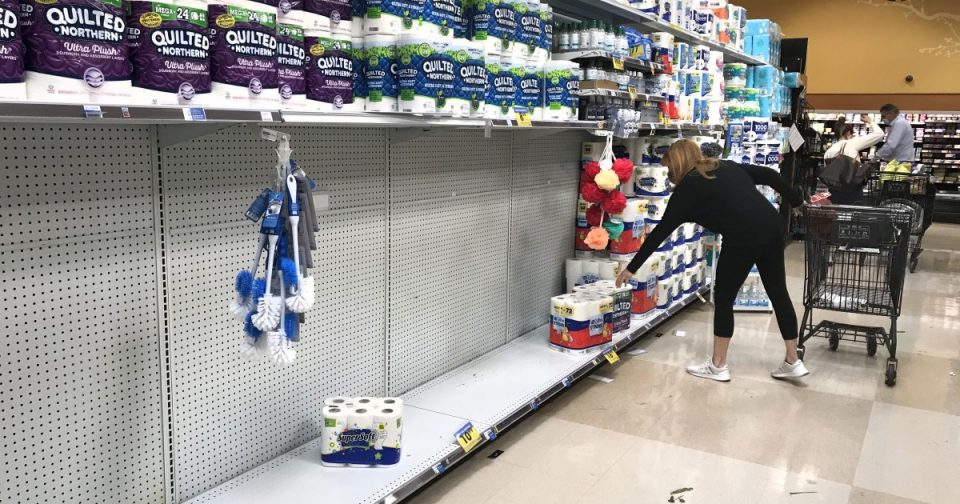 Hard times have returned to the nation’s toilet paper aisles.

With coronavirus cases and lockdowns once again on the rise, shoppers are reverting to the panic-buying patterns of the early days of the pandemic. In response, grocery companies such as Target, Ralphs parent Kroger and Vons parent Albertsons Cos. have reinstated purchase limits on toilet paper, paper towels and cleaning supplies.

But this time, the grocery companies say, they’re putting limits in place specifically to avoid the empty shelves many consumers faced in the spring — and industry experts say the grocers and suppliers are prepared for the winter wave.

“We put the limits on out of caution,” said Kevin Curry, president of Albertsons’ Southern California division, who noted that the current uptick in demand is nowhere near what he saw in March and April. “The supply chain’s in a better position to handle this rush.”

Over the summer, the industry put a number of measures in place to adjust to a new normal of high-volume grocery shopping and waves of lockdown-related shopping sprees.

Among them, stores and suppliers have started keeping more inventory on hand, when possible, to prepare for unpredictable spikes in demand.

The industry has “gone from a just-in-time mentality to a just-in-case mentality,” said Willy Shih, a professor at Harvard Business School who studies manufacturing supply chains. Companies have spent the last few decades trying to reduce inventory, in pursuit of a world in which raw materials arrive at factories in the morning, leave as finished goods at night and are sold out on store shelves the next day, with no surplus lying around at the end of the process.

The just-in-time model relies on using past data to forecast demand and flexible logistics networks to adapt to predicted shifts. It falls apart, however, when the unpredictable strikes on a global scale.

Nick Green, chief executive of Thrive Market, which sells mostly organic food and health products, said he has laid in extra supplies to prepare for this new wave of shopping.

“In an ideal world, and nine months ago, we were holding tens of millions of dollars less inventory than we are today,” Green said.

But the world changed in March. “We went through six months of toilet paper in about six days back in the first surge,” Green said. This time around, he has seen demand more than double just in the past week.

To prepare, Thrive went vertical in its warehouse for the first time. Historically, Green said, “our product is on the ground” for easy access. Now, “we not only need to use the 700,000 square feet of ground space but have stacked up multiple stories of pallets.”

Retailers have also gotten creative, cutting deals with lesser-known manufacturers that typically produce toilet paper and cleaning products for restaurants and office buildings to make more store-brand products, which can fill the shelves when name brands sell out.

“There’s a tremendous shift by the smart, strategic retailers in source of supply, drawing from excess inventory that was choking the food service and institutional manufacturers,” said Burt P. Flickinger III, managing director of the retail consultancy Strategic Resource Group. With most restaurants, hotels, offices and large venues closed due to the pandemic, that pivot has allowed the paper-goods market to meet elevated consumer demand.

The same holds true for cleaning products, according to Curry at Albertsons. Popular name-brand items, such as Clorox Disinfecting Wipes, have remained in short supply all year, so the grocer has started sourcing more of its own.

But the logistical difficulties of getting all that product from regional distribution centers to stores can pose a challenge. The disruptions to the global supply chain that began when the coronavirus first triggered lockdowns in China are still working their way through the system today, altering the typical delivery and shipment calendar for all sorts of consumer goods. The Port of Long Beach notched record-high volumes in October and into November, when in a typical year, the holiday shipping rush would have wound down earlier in the fall.

“Whether it’s imports going to distribution centers or food logistics, they spill over into each other,” said Shih, as businesses compete for space on ships, trucks and trains.

The downturn in the restaurant and institutional food service industry, however, has again proved a godsend for the grocery business.

When consumer demand for fresh produce spiked at the beginning of the pandemic, “refrigerated warehouses and refrigerated trucks were all kind of bulging in capacity,” said Michael Castagnetto, president of the produce division of logistics company C.H. Robinson. His company was able to tap into small regional warehouses typically used to store restaurant supplies, a strategy that helped grocers ride out the first wave.

The same customers that needed that extra cold storage in the spring got back in touch just last week, Castagnetto said, saying they need help again, “probably through New Year’s.”

MotoGP, Jarvis: “Without Valentino Rossi in the Yamaha factory team it will be different”