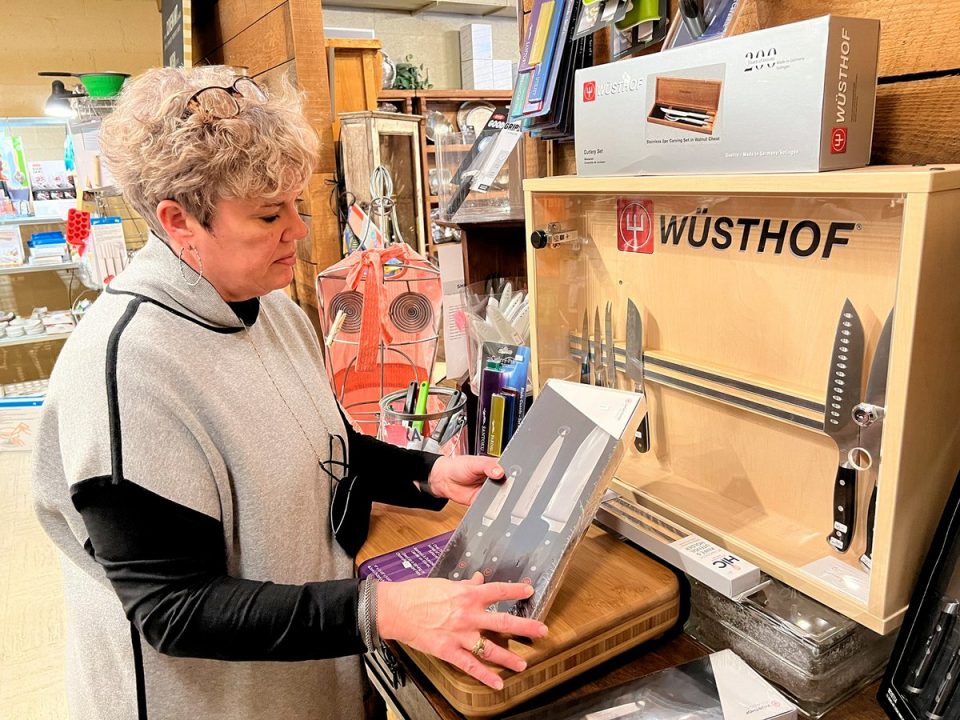 “There’s not a crisis or anything; it’s not that critical,” said Billy Angell, owner of Oak Street Garden Shop. “We certainly are having more back orders than normal, and there are some shortages, but it’s not to the point where it’s affecting our business.”

Radcliff Menge, co-owner of cloth­ing retailer Tom Beckbe, said in a statement: “We have certainly had our share of supply chain challenges, but our team has managed it well. We are well-stocked both in our Moun­tain Brook store and online, with new styles for spring and summer on the way.”

Caroline Cantanzano, manager at Monkee’s at Mountain Brook, said they’ve dealt with supply chain chal­lenges in stages, particularly during the thick of the pandemic in 2020.

“In 2020, we did have quite a bit of delays,” Catanzano said. “Things were stuck in customs or things like that to the point where they weren’t in season by the time we got them, but that’s really evened out. Not seeing that much any more.”

The Cook Store has experienced some gaps on the shelves as well but has still done well during the pan­demic, according to owner Wesley Lassen.

She said they’ve had trouble get­ting pots from one of their suppliers because the supplier has had trouble getting parts for their kilns, as well as keeping their daily workers due to the pandemic.

“I’ve also had some problems even with products made in the USA because these are raw materials that [vendors] can’t get,” Lassen said. “We had a wood supplier that we were supposed to get a delivery from in November, and we’ve just gotten part of it yesterday.”

They’ve also struggled to get knives from Germany because the manufac­turers are under strict COVID-19 guidelines for their workers, she said. “There have been some holes, but overall it has not affected me terri­bly,” Lassen said.

Stores like Mountain Brook Sport­ing Goods, however, have had a harder time getting what their cus­tomers want most. Cassandra Sanchez, the store’s manager, said they’ve had trouble getting Nike products, which are their best-sellers.

“[Nike’s] main distributors are out of China,” Sanchez said. “Them not being able to get anything makes us not be able to get anything … For about four months now, I’ve been trying to order basketballs, and every single time I try to order them, they’re like ‘No, we don’t have any in’ or ‘We still can’t get any in.”‘ She said the majority of their cus­tomers want Nike products because of the quality. The store carries other brands, she said, but they don’t sell as well. The Lingerie Shoppe has struggled to get some of their best-selling bras and undergarments since fall of 2020, store owner Brenda Meadows said.

At the start of the pandemic, the store didn’t order any products because they were closed for seven weeks, she said. During the fall, she noticed the shop as well as their ven­dors were “in a real bind,” she said. “A lot of it had two do with facto­ries that were closed off shore, and then recently, with what’s been in the news, all the boats are sitting there waiting to be unloaded,” Meadows said. The Lingerie Shoppe has struggled to get top-selling bras and undergar­ments, which has been a huge part of her business for several years, she said. Spanx, a popular women’s underwear brand, had an entire fac­tory closed, and it “won’t ever open again,” she said.

“They have several divisions, but the one that we concentrate on is all of the undergarments, and I think that was the area that really got hit, from my observation,” Meadows said.

She said the store has tried to fill its customers’ needs with other brands while continuing to order more of their best selling products.

Meadows said despite the chal­lenges they’ve faced, the shop has generally been pretty successful during the pandemic and doesn’t think those challenges will affect the overall health of the shop.

“I’m very optimistic,” she said. “Business, for the most part, has been really good … All in all, I think people have been interested in shop­ping, so that’s good.”

Tom DeCarlo, a UAB professor of marketing and industrial distribu­tion, said he fears some businesses in the United States “are not going to survive.”

“Some [industries] are experienc­ing really important shortages where a key component is missing because of supply chain disruption and that is a profitable item for them,” said.

He said some businesses are suffer­ing because their customers are able to find alternative suppliers, thus causing them to lose those customers.

Supply chain issues look different for different industries and compa­nies, he said. “For example, some manufactur­ers are having a lot of difficulty get­ting supplies from, let’s say China, or other Asian countries because of corona and limitations in their pro­duction processes,” DeCarlo said. “They have demands from other cus­tomers that they’re fulfilling and other customers that they’re having to put on hold.”

He said businesses that get their supplies through the port of Califor­nia are in trouble as well.

“Those supplies are sitting on a boat somewhere out in the ocean, waiting to be docked and offloaded,” DeCarlo said. “That’s not happening.”