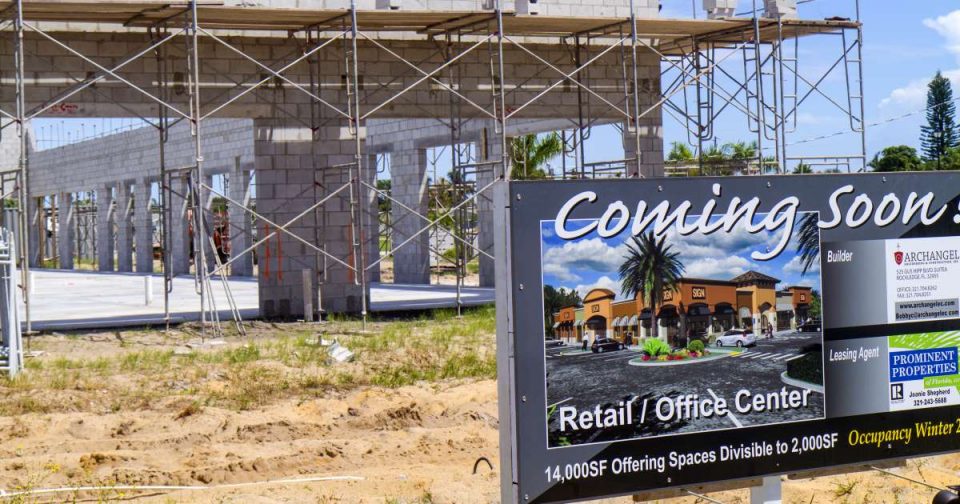 If retail is dying, then pop-up shops might be what replace it.

During the 1970s and ’80s, perhaps no company in America relied more on branding through architecture than Pizza Hut. The pizza chain’s burgeoning franchise business flooded the country with red-roofed brick buildings, the shape of which was so recognizable that it eventually became the company’s logo. But the design’s physical dominance didn’t last, as Pizza Hut closed scores of its dine-in buffets in favor of smaller pickup-and-delivery storefronts. Now a drive through the American suburbs reveals the challenge of adapting the husks of dead stores to new uses. The buildings might now host Chinese buffets or jewelry stores that want to buy your gold, but their angular, hatlike roofs betray their past.

Pizza Hut is far from alone in its capitulation to America’s changing tastes. Even in prosperous, pedestrian-friendly cities such as New York, retail and restaurant vacancies have recently ticked up; in some neighborhoods, a quarter of local storefronts lack occupants. New York’s most recent casualty is the fabled luxury department store Barneys. After the retailer’s bankruptcy last month, the inventory in the company’s Madison Avenue store is being marked down for liquidation and soon the space will be empty, the usually lively and artistic display windows darkened. By the new year, what’s left will be the Pizza Hut problem: A building everyone knows was intended for a very specific use will have to find a convincing new identity.

The old Barneys won’t be empty for long, though. What’s taking its place isn’t another stately, traditional luxury emporium serving the ladies-who-lunch crowd. Instead, the space will soon host four floors of pop-up shops—a trendy name for short-term stores intended to hype up customers and vanish before everyone gets bored. Pop-up shops have sprouted throughout American cities in recent years, and like many of those, the ones inside Barneys will include art installations and entertainment alongside a rotating set of designers who will sell their wares for a few weeks or months at a time. Those masterminding these abrupt appearances are all banking on the same short-term bet: People still want to shop in stores, even if what they want that store to be in six months is completely different.

New York City is expansive and full of rich people, but many of its most famous shopping districts are struggling. The same problems plague otherwise burgeoning urban areas around the country: rising rents, changing tastes, and the omnipresence of online shopping. In suburban American malls, shoppers are bored with longtime tenants such as Sears and Gap, and the same stuff is available everywhere. Businesses close and their storefronts sit vacant. As these businesses evaporate, people have fewer reasons to stroll past the surrounding stores and cafés that survive.

The effect is at its extreme in cities’ most fashionable urban shopping districts, such as New York City’s SoHo and West Village, where stores are often left vacant on purpose. In these areas, many businesses still want footholds and people still want to try on new jeans or eat at new restaurants. But absent rent regulations that prod landlords to work with existing tenants or fill their empty stores, some hold out for top dollar, letting their properties sit fallow until Chase, for instance, decides it needs a new bank of ATMs. This tactic can lead to big payouts for property owners, but the cost is that it boosts rents in the surrounding area and gives mom-and-pop designers, merchandisers, and restaurateurs fewer options to get themselves in front of real-life audiences.

Out of that tension comes the pop-up store. Pop-ups aren’t a totally new concept: Halloween and Christmas-supply stores have been doing seasonal stints in vacant strip-mall spaces across America for decades. But Thomai Serdari, a luxury-marketing strategist and professor at New York University, nods to the 2008 financial collapse as the moment that helped more types of businesses realize that parachuting into a trendy neighborhood often makes more financial sense than committing to hang around for 20 years. “No one wants to invest long-term, and brands don’t want to take risks with inventories,” Serdari says. Now landlords court pop-up stores with easy-to-adapt interiors so that they can benefit from a few months of cash flow without having to rule out the Wells Fargo branch of their dreams.

If you live or shop in a major American city, you might have already noticed the trend without realizing what you were looking at. Turn a familiar corner, and a new makeup brand—a name vaguely familiar from Instagram ads—might be offering virtual-reality makeovers. Turn another, and a buzzy young chef might be slinging experimental ice-cream flavors inside a diner you thought had just closed. If you’ve ever walked into what was nominally a clothing store, only to be prompted to acquire the things you want through home delivery by ordering them from a bank of iPads, you’ve almost certainly encountered a pop-up. And if everything goes as planned, something new will be in the same spot by the time the novelty wears off.

When vendors are chosen carefully, pop-ups can bring the mom-and-pop feeling back to neighborhoods that were once known for their unique urban cultures but that now host a retinue of national pharmacies and fast-casual salad joints. But temporary-retail models haven’t just piqued the interest of plucky upstarts. While some pop-ups bring ephemeral art galleries or music venues to neighborhoods, others host Uniqlo stores, exclusive opportunities to lie on Casper mattresses, or long lines for limited-edition Louis Vuitton handbags. In particular, internet-based start-ups such as the clothing retailer Everlane and the luggage brand Away have found the pop-up model convenient. People who have seen their products online get to inspect them in person, often alongside shopper-friendly amenities such as gratis cocktails and personalization services such as monogramming.

In the pop-up-shop economy, place and time are as essential to success as what’s going on inside the storefronts themselves. People want to have a day out, and they want to tell their friends they bought the new print hanging in their apartment at a cute little boutique everyone else missed out on. Perhaps no one has capitalized on this better than Appear Here, a company that acts as a pop-up middleman, streamlining the process for both landlords and tenants who might not want to deal personally with frequent turnover or searching for open-minded property owners. The seeds of Appear Here were planted in 2012, when its eventual founder, Ross Bailey, wanted to lease a storefront for a couple of weeks in London to sell T-shirts and prints with cheeky images of the queen reimagined as David Bowie—the kind of idea that’s not really compatible with the five-, 10-, and 20-year retail leases that have long been the norm in major cities. Landlords kept hanging up the phone on him, he says. He tried to sell the shirts online, but business was slow.

Eventually, a landlord relented to a short-term agreement, and Bailey claims to have sold more shirts in a day in London’s Soho neighborhood than he did in a month on the internet. “Everyone is talking about how experiences are becoming the future,” he says, referring to the now-conventional wisdom that young shoppers want to do things instead of buy things. But, he realized, physical places to have these experiences matter, too. Bailey launched Appear Here in 2014, and the company now has hundreds of shop listings that can be rented for as short as a single day or as long as a few years in cities across America and Europe. The company works with giant brands, such as Nike and Coca-Cola, and celebrities such as Kanye West and Michelle Obama, but Bailey maintains that most of its clients are independent businesses.

Global conglomerates and megastars have taken an interest in pop-up shops because they can be useful in ways that permanent retail stores aren’t. They don’t need to be self-sustaining retail channels in perpetuity, so how much coffee is sold or how many pastel suitcases find new homes often doesn’t matter. Instead, it’s about marketing. The businesses are betting that shoppers, besotted as they are with experiences, might browse a street in the same way they’d browse a magazine. Internet marketing through search engines and social media used to be a way for new companies with limited resources to stand out, but now they’re just as clogged with well-funded competition as Bleecker Street was in 2005. Renting a storefront for a few months puts you on equal footing with your neighbors for anyone who might stroll by.

A pop-up shop, by its very nature, can feel gimmicky. But during the heyday of the department stores that are now dying, their proprietors understood the importance of a little razzle-dazzle in a way that contemporary retailers just don’t. “Somewhere along the line, department stores got taken over by accountants rather than showmen,” Bailey says. The British luxury retailer Selfridges once drew in thousands of people by displaying the first plane to ever fly across the English Channel, within weeks of its historic journey. Modern shopping, during the era when people enjoyed it most, wasn’t just about selecting a product as efficiently as possible.

Stores do more for places than sell things, however. In healthy local economies, they also provide steady employment for those who live nearby and act as stable resources for their neighbors—a place to eat breakfast, a place to get your bike fixed, a place to get your shoes resoled. Pop-up shops might fill storefronts and pique curiosities, but they don’t return needed services to places that have seen them wiped out by Starbucks and Walgreens. They also don’t provide stable jobs. A store designed to close is often a store designed to lay off all its workers.

Already in New York City, you can see the warning signs of what happens when pop-up retailers get too good at what they’re doing, and when shoppers get a little too excited by faux scarcity. Outside Supreme, a permanent streetwear store in SoHo that mimics a pop-up frenzy by releasing merchandise only in limited-supply “drops,” long lines form on the sidewalk every week, clogging streets and annoying locals. The store functions on the same sense of urgency and social currency that makes people crowd into the pop-up shops of Instagram-famous clothing brands. “One needs to think about what type of business is relevant for a particular neighborhood and what type of people it’s going to attract and why, and what it does to the urban fabric around it,” Serdari cautions. “There is danger in creating too much hype.”

Amanda Mull is a staff writer at The Atlantic.