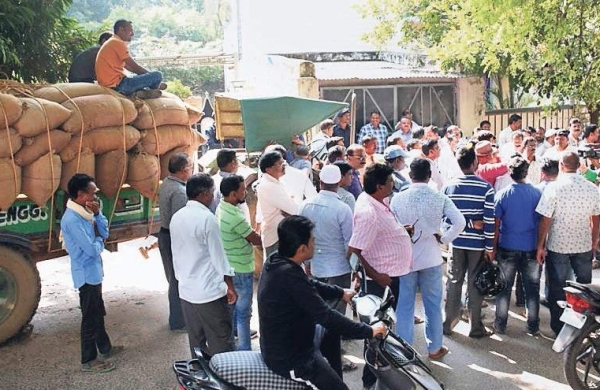 BHUBANESWAR: Is the centralised token system for paddy procurement under price support system the reason behind the farmers unrest in western Odisha or the delay in opening of ‘mandis’? Surprisingly, none of the two is.

Going by accounts of some farmers and officials, collection of biometric data of farmers registered under the paddy procurement automation system (P-PAS) seems to have drawn the ire of middlemen and agents of millers who have misinformed and instigated the farmers to go on the path of agitation.

“Problem started when iris recognition as a method of biometric identification is done at paddy purchasing centres to authenticate the real registered farmers and validate their data under P-PAS,” sources in Subarnapur district administration said.

Under the new system, registered farmers have to be present at mandis for sale of paddy to Government agencies under decentralised procurement of paddy. Paddy from the farmers can be procured after obtaining iris recognition and thumb impression. Such procedure is adopted in all the paddy procurement districts.

“It has been a practice since long that agents of local rice millers collect paddy from the farmers at a mutually agreed cost and sell the same at mandis by showing the token issued to registered farmers by the PACS concerned. The rice millers used to get a commission of Rs 200-250 per quintal from the farmers after cost of the paddy is sent to their accounts under DBT from the Government,” sources added.

The issue of token through SMS to the mobile phones of the farmers from a centralised system in Bhubaneswar to check such irregularities is believed to have triggered panic among rice millers who have engaged such agents in all the districts for paddy collection.

Realising that biometric identification will put an end to the current malpractice of selling paddy on behalf of the farmers and they are going to lose crores of business, the rice millers are believed to have instigated farmers to oppose the new system.

At a conservative estimate, the commission business alone in Bargarh district, considered to be rice bowl of Odisha with a paddy transaction of about 10 lakh quintal, will be in the range of Rs 5-10 crore.

The other major paddy procurement districts include Sambalpur, Kalahandi and Subarnapur.

“Everyone has a pie in the business starting from PACS further up in the administrative chain. What is unfortunate is that the farmers do not realise the new system will save them from exploitation of the millers and other unscrupulous traders,” said a progressive farmer of Bargarh on condition of anonymity.

It seems the Government is determined to break the nexus of millers, politicians and procurement agencies by sticking to centralised token system, he added.

However, the Government, on its part, appears to have failed to communicate the new system to farmers at large which is aimed at ushering in reforms in paddy procurement.