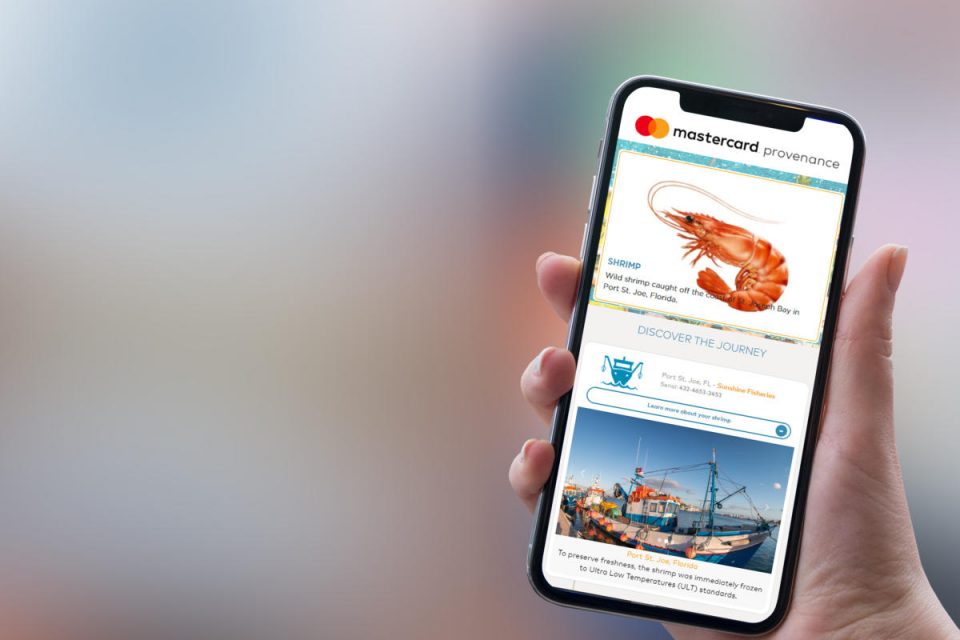 Envisible’s new Wholechain traceability system will be powered by Mastercard’s blockchain-based Provenance service; it’s designed to give grocery partners more insight into the ethical sourcing and environmental compliance of the seafood sold at their stores.

Topco‘s member grocery chains, starting with Food City, will be the first to use the supply chain ledger. The first of several species to be tracked will be salmon, cod and shrimp.

“Companies in fragmented supply chains make it harder to see end-to-end traceability,” said Deborah Barta, senior vice president, Innovation and Startup Engagement, at Mastercard. “We thought, what if we brought blockchain in to track from the origin of goods to consumer’s hands and give the ability to see ethical sourcing, compliance and enable consumers to discover the journey of the products they’re buying.”

Wholechain is a “production-grade system” – not a proof of concept or pilot, Barta said.

Customers at Topco’s stores will begin seeing QR codes on seafood and by scanning the codes with their smartphone’s camera, they can access background information about where the fish were caught and the journey to the store.

Mastercard has plans to extend its provenance solution to designer wear, luxury goods and more, the company said. When the company launched its Provenance blockchain service in April, it was initially aimed at tracking and monitoring the production chain for some in the fashion industry.

“Mastercard is trying to be in the middle of the lucrative $125 trillion business-to-business payment market by establishing a foothold in one of the most successful and promising use cases for blockchain, i.e. provenance – and in this case provenance for seafood that is prone to spoilage and must be handled super carefully in transit,” said Avivah Litan, a Gartner vice president of research.

A 2019 Gartner survey of around 850 blockchain projects across the globe found that provenance and the related asset tracking use cases are gaining the most traction and moving the fastest into pilot and limited production status when compared with other use cases, such as identity management/know-your-custoerm (KYC), trade finance, trading, voting and others.

Mastercard is also taking Visa head on in the competition for new age B2B payments, as Visa has already launched a blockchain product to support B2B payments, Litan noted.

It is also in seeming competition with JP Morgan Chase’s stablecoin blockchain and other similar bank initiatives, Litan said.

Businesses on the Wholechain supply chain will, through a set of APIs, be able to also connect to Mastercard’s payment system, Barta said, meaning they’ll not only be able to track shipments but pay for them, too.

Mastercard’s payment system can support up to 25,000 payments per second.

“Blockchain has the potential to support much more efficient and rapid payments than is possible today on legacy networks,” Litan said. “Blockchain also gives participants much needed visibility into the end-to-end payment stream, helping to eliminate most of the time spent on costly disputes and resolutions.”

Mastercard and Envisible’s supply chain is an example of a hybrid blockchain, where B2B data is transmitted across a permissioned blockchain and the consumer-facing information resides on a public or open blockchain that can be downloaded as a mobile application. Hybrid blockchains are expected to dominate in the ecommerce arena.

IBM has been piloting its Food Trust blockchain-based supply chain for more than a year. Those pilots also involved Topco, Carrefour and retailers such as Walmart.

Martha Bennett, a vice president of research at Forrester, said in many ways Wholechain is also a competitor to Food Trust, IBM’s blockchain-based produce track and trace technology.

“More than that, it’s yet another entry into what is already a crowded field – food tracking in general, and seafood tracking in particular is one of the most popular use cases, and there are at least half a dozen networks live already (if not more); some of these already overlap geographically as well,” Bennettt said via email.

Earlier this month, IBM signed a partnership with Raw Seafoods Inc. to launch a blockchain-based seafood supply chain that includes stakeholders like fisheries, distributors, retailers and restaurateurs. It will initially track scallops.

“Of the different niche segments within supply chains, the seafood industry stands to gain a great deal from visibility into its product movement, as it remains one of the most counterfeited products within the food supply chain,” IBM said in a statement.

Earlier this year, a study by ocean-conservation foundation Oceana found that one in every five seafood products tested had been mislabeled – making 20% of all seafood in the supply chain at any given moment fraudulent. Oceana’s sample set ranged over 400 samples collected from 250 locations in 24 states and the District of Columbia.

This is far from Mastercard’s first foray into blockchain.

In 2017, Mastercard opened access to its blockchain platform via APIs published on the Mastercard Developers site. The company has tested and validated its blockchain and is using its platform in the business-to-business (B2B) market to address “challenges of speed, transparency and costs in cross-border payments.

“The Mastercard blockchain technology will complement the company’s existing capabilities including virtual cards, Mastercard Send and Vocalink to support all types of cross-border, B2B payment flows – account-based, blockchain-based and card-based,” the company said in a statement.

In September, Mastercard partnered with R3, a blockchain company created by a consortium of 300 banks and other companies, to build a cross-border payment system based on the distributed ledger technology.

Millers behind farmers’ stir for loss of procurement pie?- The New Indian Express