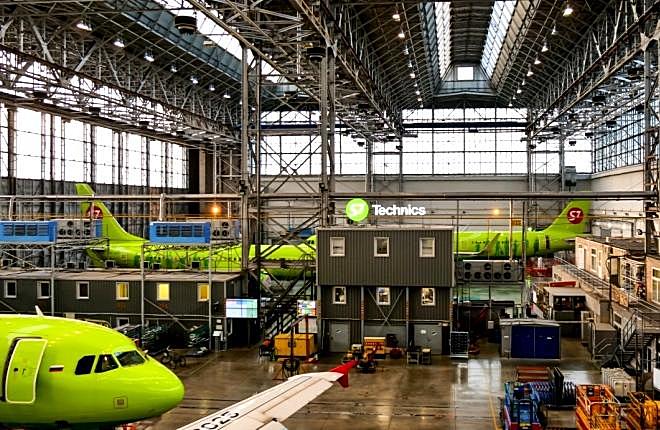 Digitalisation is steadfastly penetrating the aviation industry, from aircraft manufacturing to maintenance. Maxim Pivovar, director for information systems development at S7 Technics, Russia’s largest independent MRO provider, has told Russian Aviation Insider why this digital transformation is impossible to stop – and how it is bound to irrevocably change the Russian maintenance, repair and overhaul (MRO) industry.

Maxim, back in May 2018, S7 Technics announced plans to introduce AMOS MRO Edition software at all of its sites. At what stage is this project now?

S7 Technics has been using AMOS MRO Edition as its main information system for continued airworthiness since July 1 this year. We utilise the software for MRO procedures both for our own aircraft operated by [our parent] S7 Airlines, and also for other customers be they domestic or foreign.

What is your assessment of the current degree of process digitalisation in the aircraft MRO segment in Russia?

In general, the Russian MRO industry is at the very early stage in terms of process digitalisation. That is one of the reasons why we, jointly with IATA, recently held a Digital Aircraft Operations 2019 (DAO) Workshop. We believe it is important to draw the attention of aviation regulators and authorities to these issues. Both market leaders and authorities should understand how digitalisation works in this industry and S7 Technics is willing to be at the forefront in utilising prospective IT. Next year our plan is to make a final approach to using e-signatures, introducing the mobile version of AMOS MRO Edition and the automation of a number of other processes.

IATA’s experts insist that it’s not so difficult to implement a paperless environment as it is to ensure its safety. We need to make sure that paperless technology can indeed guarantee continued airworthiness (or MRO) process credibility in terms of documentation. A signature on paper stands for the document’s authenticity and, if necessary, we can always conduct a [physical] examination. E-signature brings other threats, such as data protection for example.

So whilst the technical capability for using e-signature (the appropriate equipment, and so on) has been around for a while now, today’s real priority is to protect the validity of the information. Once this [issue] is solved, we’ll have to work with the authorities to change the existing regulation that the technician must show up on board with a paper version of the assignment. Russia has a long way to go in this respect compared with leading aviation countries. But changes take time. We understand that.

Are there any standard digital solutions for aircraft MRO?

Swiss-AS is telling us that although digitalisation is gaining momentum globally, there are no set standards as yet. They are in the process of being defined. So, although the Russian industry has some time to catch up, it needs to use it wisely and cooperate with the international community. We need to pay special attention to standards to ensure we all use the same terminology and the same format for e-documents.

Is digitalisation Russian aviation’s biggest concern? Are there other issues?

Of course, the Russian aviation industry has a lot of issues it needs to address. We’re just at the very dawn of the digital aviation industry. But that’s the way to go. For us digitalisation is a means to boost our own efficiency – but that’s what other industry players also want. Aircraft are often handed from one Russian airline to another and paperless technologies can simplify and speed up such processes.

‘But along with airlines, the DAO Workshop was also attended by a delegation from Irkut Corporation. [This is how] we’re facilitating contacts between Irkut and Swiss-AS, for example, to make the [Russia’s advanced mid-haul airliner] MC-21 documentation instantly compatible with AMOS, meaning it would initially be issued in S1000D format. We are planning on participating in the maintenance of the MC-21, and the launch operator of the type is likely to be the airline that is using AMOS. So we can see that Russian aircraft manufacturers are taking serious steps towards implementing the S1000D format to their new aircraft, and we think that’s great.
But since S7 Technics as maintenance organisation is involved primarily in servicing western-built aircraft, we need digitalisation for other purposes as well. For instance, right now we’re working on implementing RFID for tool and equipment control. Then we plan to spread RFID technologies to our entire storage system to make material management easier and more transparent.’

What is your target then?

‘One of our priority tasks is filling the information system with refined data. Partial automation of the data input process – for instance, data about time spent on replacing a component – improves the data fidelity compared to data input by engineering and technical staff. So this way we’ll have a better understanding of our own production capabilities. Using refined data, statistics and forecasts we’ll be able to improve our efficiency and ultimately reduce aircraft downtime. Time saving is also important for us – the market is filled with aircraft, and [the number of] maintenance capabilities are not always sufficient. So the only solution is to cut down the duration of shop visits.’

How are you planning to further use AMOS?

‘We are in a continuous collaboration with Swiss-AS for upgrading the system in parts we’re not happy with, for instance the finance module, because Russian business has its own specific requirements.

‘Also we intend to introduce AMOS as our main information system. Initially the software was created for airlines, and only a few maintenance companies have adopted it so far. But Swiss-AS is willing to adapt the product to customer needs.’

Why AMOS in the first place?

‘There are other IT-solutions out there. Up to a certain moment we used the Oracle product, and then there’s SAP. These are good solutions and in some respects more flexible than AMOS. But to manage them you need an army of highly qualified programmers to support the system, which translates to unjustified [additional] expenses. Secondly, these solutions are not user-friendly for technicians, who are the main users of the product.

‘Besides that, several Russian airlines initially opted for AMOS. And we, as a customer-oriented business, need to speak the same language as our clients. In the future we may even integrate our system with those of our clients for faster data exchange. This would shave-off the extra workload we have now, because according to our contracts we have to register the works we have completed in their information systems.’

Why did S7 Technics decide to promote MRO digitalisation? As far as I can recall, no other maintenance organisation has ever organised events like the DAO Workshop.

‘You can’t go it alone. It’s tough to change the industry through authorities. In any country and in any industry, state regulators tend to be quite conservative. So we wanted to demonstrate that the global aviation community is [already] deeply into digitalisation, and there are many existing examples and best practices. We can’t afford to be left behind. [That’s why] we gathered representatives of authorities, airlines and aircraft manufacturers because we all need to progress together. The fleet of Russian airlines is mostly made up of foreign-made aircraft and, at the same time, our aircraft makers want to sell their products outside the country as well as domestically. So we need to synchronise with the global community.’

How are you going to proceed in your effort with the Russian aviation authorities?

‘Right now all I hope for is that our colleagues start talking about it. That’s where it begins. We can’t just make someone change everything when the industry’s not ready.’

Have you noticed any tangible benefits from running AMOS?

‘Yes – and quite a substantial one. The main advantage is having all data centralised in one system. S7 Technics used to have several systems.’

And how will a customer benefit from that?

‘When you have all the data concentrated in one system, you can track your shortcomings much easier. When bits of data are spread across several systems, you have to direct huge resources to combining them. Also, within this AMOS introduction framework we undertook a tremendous effort in refining the data. We optimised and processed all our databases and made upgrades a continuous process.’

What fleet size justifies such a maintenance digitalisation upgrade? Does it make sense for regional airlines with smaller fleets consisting mostly of ageing aircraft?

‘My opinion is, for some reason, not very popular in Russia, but I would say that no matter what system you’re using internally, no one forbids you from resorting to an engineering specialist, such as S7 Technics, for your continued airworthiness needs. So large market players should actually start offering continued worthiness as a distinct service. If you have [only] three aircraft, then in-house engineering would work out to be very costly, because a maintenance programme doesn’t regard the fleet size.

‘Smaller airlines won’t be interested in AMOS, because it requires a substantial investment. So I believe that [generally] Russia, along with MRO, needs to develop continued airworthiness services. It may not be very easy, but that’s the future.’

What is the cost of introducing AMOS?

‘The cost of AMOS is comparable or less than the yearly cost of the operation of one aircraft.’

Millers behind farmers’ stir for loss of procurement pie?- The New Indian Express