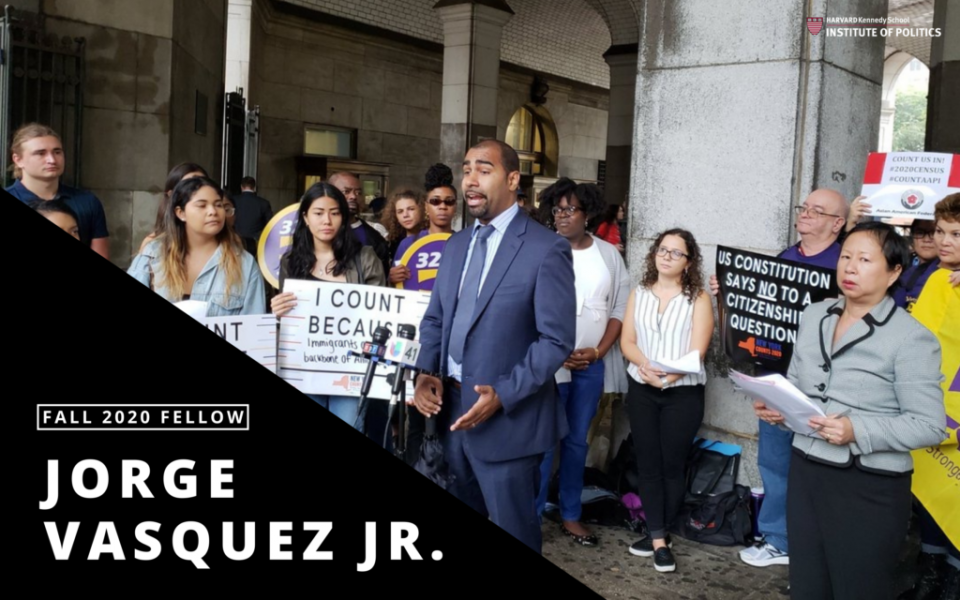 Jorge L. Vasquez, Jr. is a Fall 2020 Fellow at the Harvard Institute of Politics. He leads initiatives out of the Advancement Project National Office concerning voting and American democracy. As a former associate counsel with LatinoJustice PRLDEF, he is particularly passionate about issues within Latinx and Black communities. Jorge is active in national conversations around the 2020 census, redistricting, and furthering a bipartisan effort that gets as many eligible voters as possible to engage with the political process.

Note: This interview was conducted on Tuesday, October 27, 2020, shortly before the 2020 United States presidential election.

Harvard Political Review: Is there any particular moment that sticks out to you as a defining moment for deciding that you would serve your community as a lawyer?

Jorge L. Vasquez, Jr.: Advocacy was something that I was doing before I necessarily knew what it was to be an advocate. My great grandmother came to the United States from Puerto Rico during the migration in the 1950s, and when my parents were born, she always had the entire family engaged in helping others. So by the time I was in kindergarten, I remember canvassing around election time, passing out election flyers, attending community board meetings, and the like. As I got older, that passion for advocacy grew more, and the more I was doing on the community front, the more I recognized that the law was going to be one of the strongest tools to effectuate change in my community. And as I got older, my definition of community broadened. It started out with Manhattan’s Lower East Side, where I was born and raised. And as I got older, my community expanded. Today it certainly includes Latinx and Black communities throughout the United States.

HPR: One of the larger issues that you focus on is voting rights, and minority communities in particular often face more challenges than others through issues like language barriers, accessibility of work conflicts, voter registration issues, and more. These problems aren’t anything new. So why has change been so slow to come about? And what can members of these disenfranchised communities be doing to help speed it along?

JV: These issues are not new, in that there’s always been barriers to the ballot. But they are new as it relates to immigrant communities and Black and Latinx communities, in that it was illegal for many of these communities to have access to the ballot just two generations ago at most. We’re at the first point in American history when over 62 million eligible voters are Black and Latinx, with 32 million of those eligible voters being Latinx. It is the first time that 18 million eligible voters are Black women. Similarly, it’s the first time when over 20 million voters are naturalized citizens. We see for the first time that no national office can afford not to engage the Black, Latinx, or naturalized communities. Certainly in a national pandemic, we find that many individuals are dependent on online voter registration. Many states have online voter registration, but some do not. And what we find is that some of the states that do not are places where there are large communities of color. And what that means is when you don’t have a DMV open, when you don’t have government offices open, when you don’t have the traditional means of interaction to register to vote, communities of color, immigrant communities, and Black and Latinx communities are left depending on online systems as our only option, if that’s even an option.

Also, many people within these categories that I’ve listed are some of the highest demographics of young voters. When you think of Generation Z to younger millennials, those populations are traditionally individuals of color. We engage these people by making sure that we’re doing things like the Harvard Votes Challenge. Also, at my employer, Advancement Project National Office, we’re providing voters with an opportunity to understand how to vote. Many people, even if they’re eligible to vote, may not know that you need to affirmatively register to vote. And those voting laws vary state to state. What we see so far in 2020 is that many individuals who are immigrants or naturalized citizens, as well as Latinx and Black voters, face increased risk of error when filling out mail ballots. And with that risk of error, individuals are not guaranteed that their votes are going to be counted. So one of the other things that we could do as a general community is educate individuals on how to track their ballots, and how to fix their ballot, should it need fixing. So those are things that we need to amplify to ensure that individuals are able to participate and engage.

HPR: Could you lay out what you see as the next steps for the Latinx community, specifically, in the U.S. under each potential president?

It is not sufficient to talk about immigration as if it’s the only Latinx issue. Both parties have traditionally used immigration as a talking point to us. Certainly, it is of interest. But we also are interested in what happens abroad because we have relatives that are abroad. We are certainly interested in what happens in the military because we have many of our loved ones in the military. Similarly, we are interested in jobs, health care, and other things, like any other American. But what’s been missing is the ability to engage with our community and understand what our needs are.

HPR: In another opinion piece you wrote for The Hill, you talk about the challenges around the 2020 Census in terms of participation over the Trump administration’s efforts to include a citizenship question. In a future without Trump’s anti-immigrant rhetoric, would a citizenship question on the US Census hold any value?

JV:  No, it won’t hold any value. Because, as I pointed out in 2020, we have the largest number of foreign-born citizens, meaning naturalized citizens, and it won’t hold value. This is because someone who’s a citizen today, or someone who’s not a citizen today, may well be a citizen tomorrow. It makes no difference whether or not we ask that on the decennial census. Within the decennial year, the Census Bureau is already collecting that data through the American Community Survey. There’s no reason to then add it to the decennial census, when it adds confusion. And we don’t know how long the impact of anti-immigrant rhetoric is going to last for.

HPR: How has being involved in different projects that focus on different areas of social justice helped you better serve your community as a whole?

JV: Because my community is diverse, similar to the Latinx community, being able to use my life experience, as well as my talents and legal experience in advocacy allows me the fortunate opportunity of meeting individuals in different spaces and being able to see how things interconnect. And being able to work in an interdisciplinary model has allowed me the ability to see things broadly. The ability to connect things, and to serve as a conduit of both information and advocacy amongst the Latinx community, allows me to bridge gaps and connect people to information that they may not otherwise have had access to.

HPR: There are a lot of anxieties surrounding the election, the census, and the future in general. What is one vision or image for the future that you are excited and eager to be working toward?

JV:  Diversity. It’s amazing when you see that 10% of all eligible voters are naturalized citizens. That’s huge. When we look at America’s largest voting block, it’s your colleagues at Harvard — we’re looking at 18 to 24-year-olds and individuals under 30. What we know about that voting block is that it’s diverse, and it believes in diversity and accountability. That provides so much hope for America. No matter how turbulent the times may seem, tomorrow for certain will be brighter because America is so diverse.