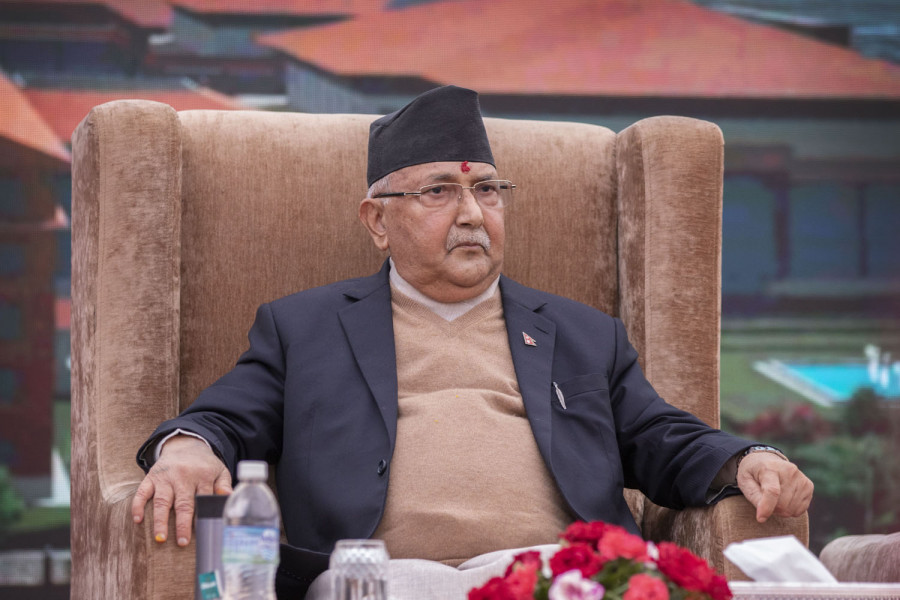 Article 56 (1) of Nepal’s constitution reads: “The main structure of the Federal Democratic Republic of Nepal shall be of three levels, namely the Federation, the State and the Local level”, thus indicating the nation’s official name.

Despite this constitutional provision, the Ministry of Law, Justice and Parliamentary Affairs on October 14 issued a circular asking all the concerned agencies to write just “Nepal” instead of the “Federal Democratic Republic of Nepal”.

This would mean other countries would henceforth have to address the country as Nepal and textbooks have to be changed to reflect the new government directive.

This decision of the Cabinet, leaders of the ruling Nepal Communist Party and constitutional experts, however, say, is against constitutional provisions.

“I believe this is a part of a grand strategy to weaken federalism,” Ram Kumari Jhankri, a ruling party lawmaker, told the Post.

They say that this is part of Prime Minister KP Sharma Oli’s series of actions to demolish the existing system.

“Everything is coming in a series of decisions as Oli is against federalism and his actions are heading towards demolishing the existing system,” said Leelamani Pokhrel, a Standing Committee member of the ruling party. “This is just another step of his to weaken and damage the system.”

The ministry circular was based on a September 27 Cabinet decision which had concluded that it was necessary to write Nepal to maintain a uniformity in naming the country.

But the general public came to know of the decision only after the circular was issued.

“Instead of ‘Federal Democratic Republic of Nepal’ referred as the official name of Nepal in some of the government documents and in diplomatic correspondences, ‘N-E-P-A-L’ shall be written now onwards,” reads the circular.

Neither was it listed among the Cabinet decisions in the website of the Ministry of Communication and Information Technology this particular decision is missing.

Similarly, the Law Ministry too hasn’t made its circular public through its website.

“The government’s move seems suspicious with the way they kept the decision secret,” said Matrika Yadav, a Standing Committee member.

Yadav has also issued a statement flouting the government’s decision.

The decision to refrain from naming the country as a federal democratic republic was made exactly five years after the country promulgated the Constitution of Nepal which has adopted federalism, republicanism and secularism as its major pillars.

“How can the Cabinet amend the constitutional provisions?” asked Dev Gurung, chief whip of the ruling party, who is also the Standing Committee member. “If the name of the country has to be changed, the constitution must be amended.”

Pokhrel said at least three places in the constitution— sixth paragraph in the preamble, Article 4 —Nepal State— and article 56- structure of the state— have clearly stated that the country should be called Federal Democratic Republic Nepal.

The sixth paragraph of the preamble states: “We hereby pass and promulgate this Constitution, through the Constituent Assembly, in order to fulfil the aspirations for sustainable peace, good governance, development and prosperity through the federal, democratic, republican, system of governance.”

“Do the ministers even read the constitution?” asked the Standing Committee member Pokhrel.

Law Minister Shiva Maya Tumbahangphe, on the other hand, has claimed that nothing specific regarding the name is written in the constitution.

“Nowhere in the constitution has ‘Federal Democratic Republic Nepal’,” said minister Tumbahangphe. “We have not touched anything from the constitution and we know it well that only the parliament can change any of its provisions. We just wanted to make uniformity in the letter we get from different foreign missions.”

She said there must have been misunderstandings so the issue was blown out of proportion.

Officials at the Law Ministry followed the official line and downplayed its circular saying that the decision is nothing but an attempt to ensure that there is uniformity in the way the country is named.

“I don’t think it’s a big issue. The decision only aims to maintain uniformity; there’s nothing to read between the lines,” Lila Devi Gadtaula, spokesperson at the ministry, told Post. “We haven’t publicised the decision through the website because it’s not a recent decision but just a step to execute the Cabinet’s decision.”

Nepal’s republican constitution was promulgated in September 2015, after more than seven years of deliberations and two general elections to elect the Constituent Assembly members, following a decade of armed conflict in which some 13,000 people lost their lives.

Constitutional experts say refraining from naming Nepal as a federal republic nation is a blatant attack on the spirit of the constitution. They say if the government wants to maintain a uniformity why not adopt a Federal Democratic Republic as the official name.

Senior Advocate Chandra Kanta Gyawali said the Cabinet does not have the authority to change the unamendable constitutional provisions as it would change the existing federal system of the country to the previous unilateral system.

“This move will seriously breach at least four provisions of the constitution—preamble and articles 2, 4, 56, 74 and 274,” Gyawali told the Post.

Article 2 talks about the sovereignty and state authority is vested on Nepali people and “it shall be exercised in accordance with the provisions set forth in this Constitution” while Article 274 says only a two-thirds majority of the federal parliament can amend the constitution.

But this is not an amendment of the constitution, according to Minister Tumbahangphe.

“Do they know the cabinet cannot amend the constitution?” she said.

After informal consultation with constitutional experts, the parliamentary State Affairs and Good Governance Committee of the House of Representatives has demanded time from the prime minister through his personal secretariat so as to summon him to clarify the cabinet decision regarding the official name of the country. “After the prime minister fixes time we will summon him to the parliamentary committee,” said Shashi Shrestha, chairperson of the Committee.

For Gyawali too this move is the latest step to weaken the existing system as the prime minister had said provinces are the ‘administrative unit’ of the federal government.

Three days after the Law Ministry’s circular, Oli, who also is a chair of ruling Nepal Communist Party, in a meeting with Karnali Chief Minister Mahendra Bahadur Shahi, his challenger Yamlal Kandel and other provincial leaders, on October 17, had said the provincial government are the units of the federal government. He had made similar remarks in May 2019 in Dhading where he had said, “There is one single government, Nepal government, which has different organs including the provinces and local levels.”

“ If the prime minister is not committed to the constitutional provisions that adopts federalism, he is not eligible to rule the federal country,” Gyawali said.

Political analysts have also questioned the government’s move saying that the official names of the countries should be at par with the constitution like Republic of India, People’s Republic of China, United States of America among others. During the Panchayat era and the constitutional monarchy era Nepal was officially called Kingdom of Nepal.

They say Oli neither has made any contribution for republican set up nor for federalism but was dragged by the circumstances to support the new system. Ironically history bestowed him the role to implement the federal and republic constitution.

“The series of activities of Prime Minister Oli indicates that he is trying to derail federalism in a systematic and planned way,” said Shyam Shrestha, a political commentator, who has followed left politics of the country for decades. “I think this latest move could also be a part of it. Cabinet decisions which do not conform with the constitution cannot be implemented.”

The constitution is what it says, according to experts.

“The basic structure of the country cannot be changed even by the federal parliament,” said Gyawali. “The first meeting of the first Constituent Assembly [in 2008] had decided that Nepal would be named ‘federal democratic republic Nepal’ and the name was sent to the United Nations after the assembly endorsed it.

Trade Deficit Falls To $8.78 Billion Against $11.76 Billion As Indian Export Dips After Positive Growth In September