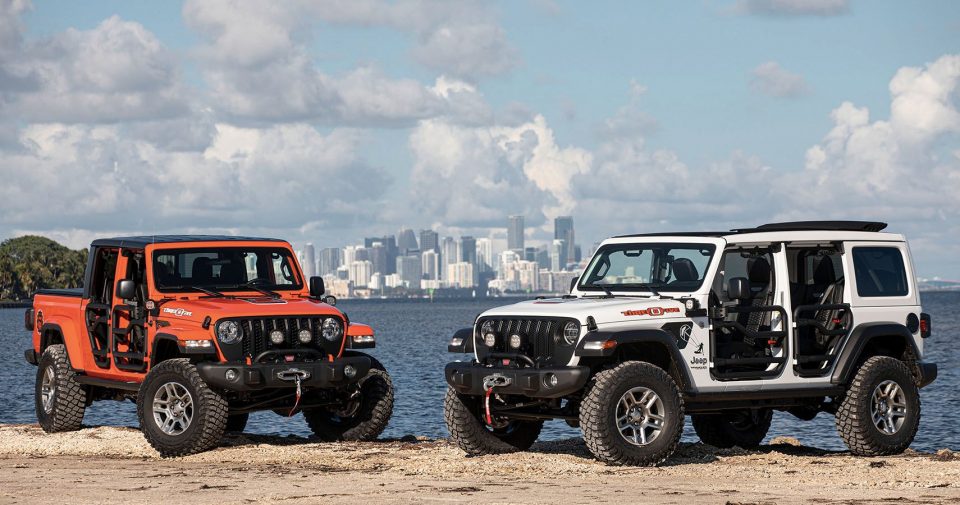 Jeep just unveiled a 2″ factory lift kit for the recently released diesel Wrangler and Gladiator. Let’s take a look at what’s in the new package.

As Jeep and Ford squabble on social media over which company produces the most awesome off-roaders, one hilarious detail is that customers of both brands who buy rugged SUVs and pickups often plan to spend thousands of additional dollars on aftermarket modifications immediately following their purchase. Sure, the Gladiator can be bought with disconnecting sway bars and three locking differentials—but what about bigger tires and better skid plates? One of the first mods that Jeep owners opt for is to install a suspension lift, and Jeep knows this, which helps to explain why FCA just unveiled a two-inch factory lift kit for the recently released diesel Wrangler and Gladiator models.

Working On That Ride

The kit comes courtesy of Mopar and Jeep Performance Parts, with shocks from established aftermarket off-roading company Fox. Specifically, the kit offers an 18% increase in suspension articulation when installed thanks to 2.5-inch-thick Fox monotube shocks (as compared to the stock two-inch units).

The springs should help to counteract the diesel engine’s heavier weight, meanwhile, and longer control arms provide the opportunity to customize caster settings and features heavy-duty bushings to handle the additional torque the entire suspension system will handle during hardcore driving.

Get It From The Factory

Rather than going out and buying aftermarket parts and then having a shop install them, these lift kits can be ordered from the dealer—Wrangler setups are available immediately though Gladiator owners will have to wait until later this summer.

Pricing is set at $1,495  (not including installation, of course) and customers can opt to have their speedometers and odometers reset if they’re also going to choose 33-inch or larger tires to go along with the additional ride height. All that remains to be seen is how Ford responds with Ford Performance upgrade kits for the Bronco and Raptor.

NEXT: Hennessey VelociRaptor 500 Is The Cure For Your Off-Road Blues

Ranking The Fastest Chevrolets Ever Made

Torstein Salvesen grew up surrounded by Los Angeles car culture, going to small enthusiast meets and enormous industry shows. He learned to drive stick shift in a 1948 Chevy pickup with no first gear and currently struggles through LA traffic in a 2001 Audi TT 6-speed. These days he mostly rides his bicycle in town and heads out to Malibu or the Angeles Crest Highway for fun mornings in the canyons. He’s written in various media since graduating from UC Berkeley in 2010.

As forwarders help shippers to go greener, they also find it can be cheaper

Free Cheesecake Slice From The Cheesecake Factory Via DoorDash On Orders Of $12 Or More Through August 9, 2020 (DashPass...