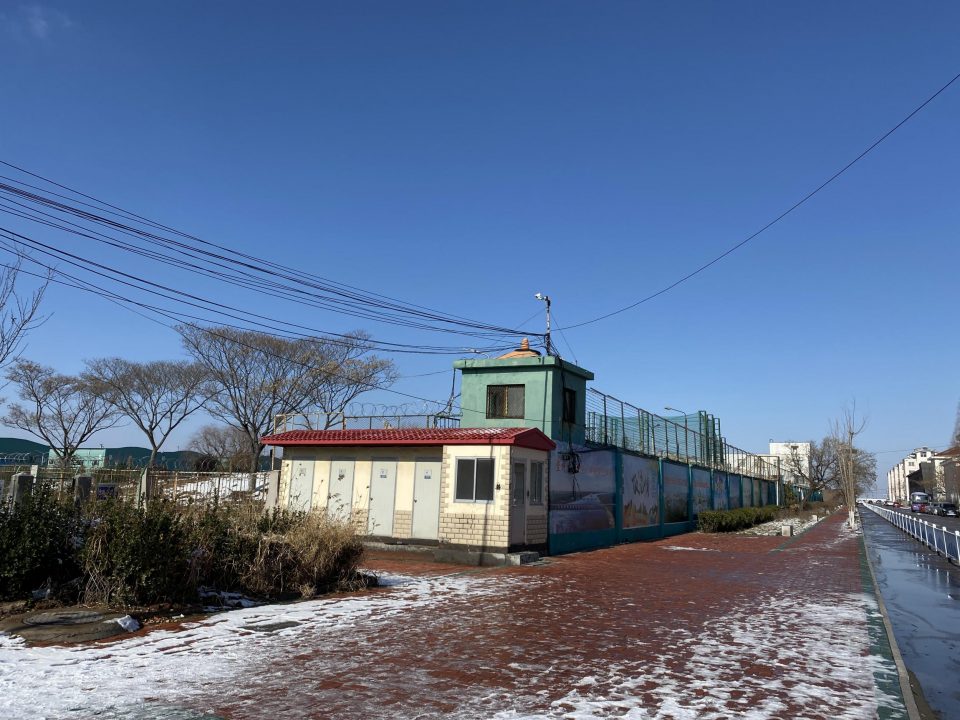 The workers in standard-issue blue jackets stitch and glue and press together about eight million pairs of Nikes each year at Qingdao Taekwang Shoes Co., a Nike supplier for more than 30 years and one of the US brand’s largest factories.

They churn out pair after pair of Shox, with their springy shock absorbers in the heels, and the signature Air Max, plus seven other lines of sports shoes.

However, hundreds of these workers did not choose to be here: they are ethnic Uighurs from China‘s western Xinjiang region, sent here by local authorities in groups of 50 to toil far from home.

Sharing the full story, not just the headlines

After intense international criticism of the Communist Party’s campaign to forcibly assimilate the mostly Muslim Uighur minority by detaining more than a million people in re-education camps, party officials said last year that most have “graduated” and been released.

But there is new evidence to show that the Chinese authorities are moving Uighurs into government-directed labour around the country as part of the central government’s Xinjiang Aid initiative.

For the party, this would help meet its poverty-alleviation goals but also allow it to further control the Uighur population and break familial bonds.

“We can walk around, but we can’t go back [to Xinjiang] on our own,” said one Uighur woman in broken Mandarin as she browsed the street stalls at the factory gate on a recent afternoon.

Nervous about being seen talking to a reporter, she quickly scurried away.

When their shifts end, the Uighur workers – almost all women in their 20s or younger – use hand gestures and rudimentary Mandarin to buy dried fruit, socks and sanitary pads at the stalls.

Then they walk around the corner, past the factory’s police station – adorned with Uighur writing telling them to “stay loyal to the party” and “have clear-cut discipline” – to dormitories where they live under constant supervision.

The Uighur workers are afraid or unable to interact with anyone in this town, north of Qingdao, beyond the most superficial of transactions at the stalls or in local stores, vendors have said.. But the catalyst for their arrival here is well understood.

“Everyone knows they did not come here of their own free will. They were brought here,” said one fruitseller as she set up her stall. “The Uighurs had to come because they did not have an option. The government sent them here,” another vendor told The Washington Post.

The Post did not ask for their names, out of concern for their safety and so they could discuss an issue that is highly sensitive in China. (While visiting Laixi, this Post reporter was surrounded by seven police officers, questioned, and ordered to leave town.)

The Taekwang factory is one of many where Uighurs are working “under conditions that strongly suggest forced labour” to make goods for more than 80 established global brands, according to an upcoming report from the Australian Strategic Policy Institute (ASPI), a Canberra-based think tank.

In some cases, they found evidence that Uighurs were transferred directly from internment camps to factories.

“For the Chinese state, the goal is to ‘sinicise’ the Uighurs; for local governments, private brokers and factories, they get a sum of money per head in these labour transfers,” Ms Xu said.

Asked about Uighur workers in the factory, Nike said that “we respect human rights in our extended value chain, and always strive to conduct business ethically and responsibly”.

“We are committed to upholding international labour standards globally,” said Nike spokeswoman Sandra Carreon-John, adding that its suppliers are “strictly prohibited from using any type of prison, forced, bonded or indentured labour”.

Kim Jae-min, the chief executive of Taekwang, the factory’s South Korean parent company, said about 600 Uighurs were among 7,100 workers at the plant.

Nike’s manufacturing map shows that the factory has 4,095 employees, of whom 3,445 are “line workers”.

“The purpose of bringing in migrant Xinjiang workers (in addition to other migrant Han Chinese workers) is to offset the local labour shortage, due to increasing number of competing industries for workers in our area,” the CEO said in a statement.

The ASPI​ report conservatively estimates that more than 80,000 Uighurs were transferred from Xinjiang  to work in factories across China between 2017 and 2019.

This figure is consistent with reporting from China’s state broadcaster, which said in November that the Xinjiang government wanted to transfer out 100,000 “surplus labourers” between 2018 and 2020.

Sending young Uighurs away to work can change their mind-set by “distancing them from religiously extreme views and educating them”, said one local government report.

Xinjiang’s Turkic language-speaking, mostly Muslim Uighurs have much more in common with the cultures of central Asia than with China’s Mandarin-speaking Han majority, and have long chafed at Beijing’s oppressive rule.

By the party’s own count, tens of thousands of Uighurs have been sent to Guangdong and Fujian provinces in the south, and to Zhejiang, Anhui and Shandong in the east.

State media reports have described “poor farmers and herdsmen” sent to enterprises inside and outside Xinjiang, portraying them as grateful.

“We will feel the party’s favour, listen to the party’s words and follow the party wherever and whenever we go,” a 20-year-old called Zulinar Idris was quoted as saying.

An industry of middlemen has cropped up to facilitate the dispatch of Uighurs, touting “semi-military-style management” and “government management with police stationed at factories”.

In its report, ASPI said it had found evidence that Uighurs were being exploited and that foreign and Chinese companies were involved, possibly unknowingly, in human rights abuses.

The researchers found 27 factories in nine Chinese provinces that have used Uighur workers hired through labour transfer programmes from Xinjiang since 2017.

The factories are owned by firms that feed into the supply chain of some of the world’s best-known companies, including Apple, Dell and Volkswagen, the report finds.

BOE Technology Group, which supplies screens to Apple, and O-Film, which makes iPhone cameras, both use Uighur labour, either directly or through contractors, the report found. Apple lists both companies on its latest supplier list.

Apple said that it has strict requirements for suppliers.

“Apple is dedicated to ensuring that everyone in our supply chain is treated with the dignity and respect they deserve,” said spokesman Josh Rosenstock. “We have not seen this report but we work closely with all our suppliers to ensure our high standards are upheld.”

Volkswagen spokesman Nikolas Thorke said that “none of the mentioned supplier companies are currently a direct supplier of Volkswagen”.

“We are committed to our responsibility in all areas of our business where we hold direct authority,” he said.

Dell said it would look into the report’s findings. “Though our current supplier audit data show no evidence of forced labour in our supply chain, we take all allegations of this nature seriously and will investigate fully,” said spokeswoman Lauren Lee.

While ASPI could not categorically confirm that the labour was forced, their report said there was clear evidence of “highly disturbing coercive labour practices” that was consistent with the International Labour Organisation’s definition of forced labour.

At the front gate, the Taekwang factory looks like any other in China. Rows of long buildings sit behind a gate where three flags flutter: the company ensign and a Chinese flag, but also a South Korean one, reflecting the parent company’s home base.

Inside, the workers’ ideology and behaviour are closely monitored. At a purpose-built “psychological dredging office”, officials from Taekwang’s local women’s federation conduct “heart-to-heart” talks and provide psychological consulting to encourage integration, according to photos of the offices published by state media.

Along the side, the facility resembles a prison. There are watchtowers with cameras pointed in all directions and barbed-wire fences atop the walls, which feature Communist Party propaganda posters extolling the Chinese president Xi Jinping‘s “China dream”.

“All ethnicities are united as one family,” says one placard.

There is a special police station equipped with facial recognition cameras and other high-tech surveillance that workers must pass through when they enter and exit the factory.

The Uighurs are segregated from the Han workers, both physically and by language, according to more than a dozen local merchants and workers who spoke to The Post about the situation inside the factory.

“They do not speak Mandarin, and we never have any interaction. We just happen to work in the same factory,” said one middle-aged Han woman as she left work for the day.

“We have two cafeterias,” she said. “Chinese workers eat in one and Xinjiang workers go to a separate one. The Uighur workers are allowed to wander around near the compound, but have to return to their dorms later.”

The workers live under the watchful eye of their cadre manager in dormitory buildings opposite the police station.

They sometimes go to the one Muslim restaurant in town, often ordering steaming bowls of lamb noodle soup by pointing at the photos on the wall. Signs saying “halal” and other phrases in Arabic have been taped over, in line with orders from the authorities.

There is no mosque in the town or in the factory. Bitter Winter, a website devoted to religious freedom in China, has reported that the Uighur workers are not allowed to pray or read the Quran.

Instead, they must attend patriotic education and Mandarin classes at a training school called Pomegranate Seeds, the state-run publication China Ethnic News reported.

The school is named after an edict from Mr Xi, who said that “people of all ethnic groups should hold together like pomegranate seeds”.

Security at the factory is tight. Factory administrators told a Post reporter this was a Nike requirement – Nike inspectors were visiting that day – but locals said it was also to monitor the Uighur workers.

“Some would say they use national-level security standards,” one of the street vendors said. “They keep a detailed account of the workers’ entries and exits, and they have to obey a strict schedule, coming to work or leaving the compound only at specific hours.”

Taekwang did not respond to questions about whether the Uighurs were forced to work in the factory under threat of re-education, nor whether they could pray or observe religious practices while working at the factory.

The company provides “special food to our employees from Xinjiang” and “optional Mandarin language for non-Mandarin speakers, that will help ensure a positive work environment and job success”, said the chief executive.

For their part, top party officials are pleased with the efforts.

“By ‘encouraging’ ethnic minorities in Xinjiang to ‘interact and develop themselves,’” Wang Yang, who is leading the Xinjiang labour policies, said at a meeting in the Xinjiang city of Hotan, “China has immensely promoted the interaction and integration among different ethnicities.”

Video: Fire erupts at a UAQ factory on Thursday – News