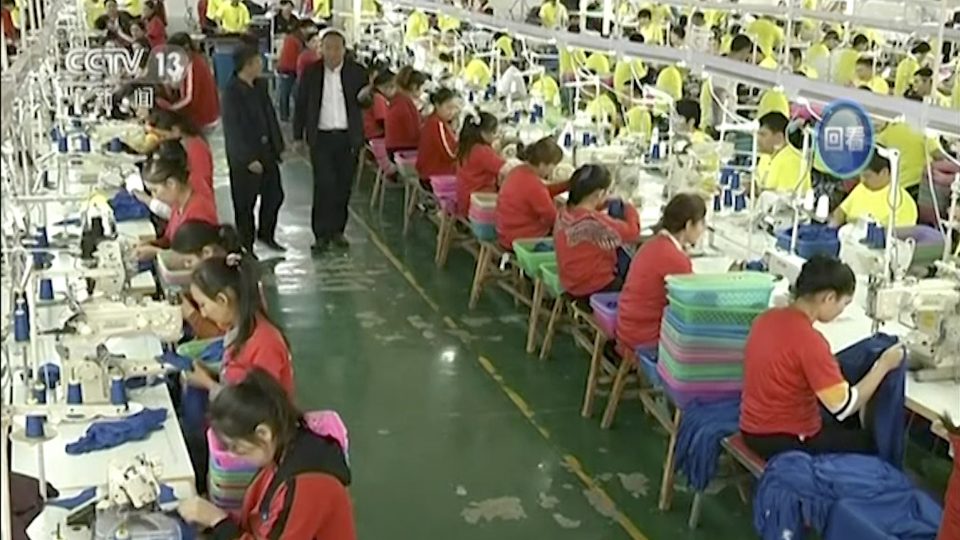 More than a dozen Uyghurs have been assigned to work in a factory in northwest China’s Xinjiang Uyghur Autonomous Region (XUAR) from a local internment camp, according to officials, bolstering reports that government policy is shifting from mass incarceration to forced labor in the region.

An official who works within the judiciary in the XUAR’s Kashgar (in Chinese, Kashi) prefecture recently told RFA’s Uyghur Service that 14 Uyghurs who were formerly held at an internment camp had been sent to work against their will at the Ruyi Textile Factory in the prefecture’s Yengisheher (Shule) county.

“In the township where I am working, there are 14 people [who are former camp detainees] working in a factory,” said the official, who spoke on condition of anonymity, confirming that the group had been assigned to work at the facility through their internment camp.

“They are working for the Ruyi Textile Group in Cao Hu—there are many companies [from other parts of China] located there,” he said of the township, administered under the Xinjiang Production and Construction Corps’ No. 41 unit.

When asked if he had personally brought the group of 14 people to the factory, the official said, “Yes,” adding that “there are many people working there,” although he did not specify whether they were former camp detainees held against their will or regular workers.

The official People’s Daily newspaper reported last year that Ruyi Textile Group had established a factory in Kashgar in 2014, resolving the area’s unemployment problem by providing some 5,000 jobs, and that local residents were very happy to be working there.

However, a second source from the area, who also declined to be named, told RFA that many people had been assigned to the factory from the XUAR’s vast network of internment camps, where authorities are believed to have held up to 1.5 million Uyghurs and other Muslim minorities accused of harboring “strong religious views” and “politically incorrect” ideas since April 2017.

“They are housed in dormitories,” the source said, adding that whether or not workers are allowed to go home “depends on their circumstances.”

“I heard that some people go home once a week, others once a month, and some once every three months.”

While people who work at similar textile factories can earn up to 5,000 yuan (U.S. $710) a month, the source told RFA that most who are assigned to work through internment camps make nothing at all until they “complete their training.”

“There are a few people who receive low wages,” the source said.

“I went to visit a family and the parents said their son is working in [the Ruyi] factory. He receives slightly more than 2,000 yuan (U.S. $285) every two months.”

RFA also spoke with the ruling Communist Party secretary of a township in Yengisheher who said that of the 202 people from the area under his administration that are currently detained in internment camps, 13 have been sent to the Ruyi factory as part of the forced labor scheme.

“They don’t come home [on a daily basis], as they are working in the Ruyi Textile Factory,” he said, adding that they only get to see their families “once in eight days.”

The small amount of money they earn is sent to their families, the secretary added.

While Beijing once denied the existence of the internment camps, China this year changed tack and began describing the facilities as “boarding schools” that provide vocational training for Uyghurs, discourage radicalization, and help protect the country from terrorism.

Reporting by RFA’s Uyghur Service and other media organizations, however, has shown that those in the camps are detained against their will and subjected to political indoctrination, routinely face rough treatment at the hands of their overseers, and endure poor diets and unhygienic conditions in the often overcrowded facilities.

Last week, Adrian Zenz, Senior fellow in China Studies at the Washington-based Victims of Communism Memorial Foundation, told RFA that China began to gradually shift from “vocational training” into what he called “involuntary or coercive forms of labor” in the second half of last year.

Zenz said that while it is difficult to confirm such trends, as there is limited evidence to work from and China’s government doesn’t provide statistics, he believes that “in 2019 Xinjiang has been moving from internment into forced labor.”

At a hearing in Washington held by the Congressional-Executive Commission on China (CECC) last month, witnesses including Zenz highlighted reports of a widespread system of forced labor in the XUAR, which requires Uyghurs and other ethnic minority Muslims to work in the production of textiles, food, and light manufacturing.

Zenz detailed a forced labor system he called even “more shocking” than that of the internment camps, which he said involved coerced military, political, and vocational training for the purpose of working in officially subsidized companies as part of a “business of oppression.”

China is the world’s largest cotton producer and Zenz noted that some 84 percent of China’s cotton is produced in the XUAR, meaning that between the textile industry and other forms of work—including on components that are sent to eastern China and incorporated into finished products—it is extremely difficult for customs officials in the U.S. to determine whether imported goods are linked to forced labor in the region.

In May, The Wall Street Journal reported that Adidas AG, Hennes & Mauritz (H&M) AB, Kraft Heinz Co., Coca-Cola Co. and Gap Inc. “are among those at the end of the long, often opaque supply chains that travel through China’s northwest region of Xinjiang,” where residents are “routinely forced into training programs that feed workers to area factories,” citing locals, official notices and state media.

The Journal said that resistance to such programs by workers and factory bosses could lead to their detention “as suspected extremist sympathizers, even while companies its reporters spoke with noted that the training would violate policies for suppliers, which require responsible workplace conditions.

“Much of this has taken place under the radar,” the report said, adding that “Beijing has directed Chinese companies to bring jobs to Xinjiang, often through subcontracting that isn’t known to Western companies, as part of the government’s effort to reduce what it says is violence and religious extremism in the area.”