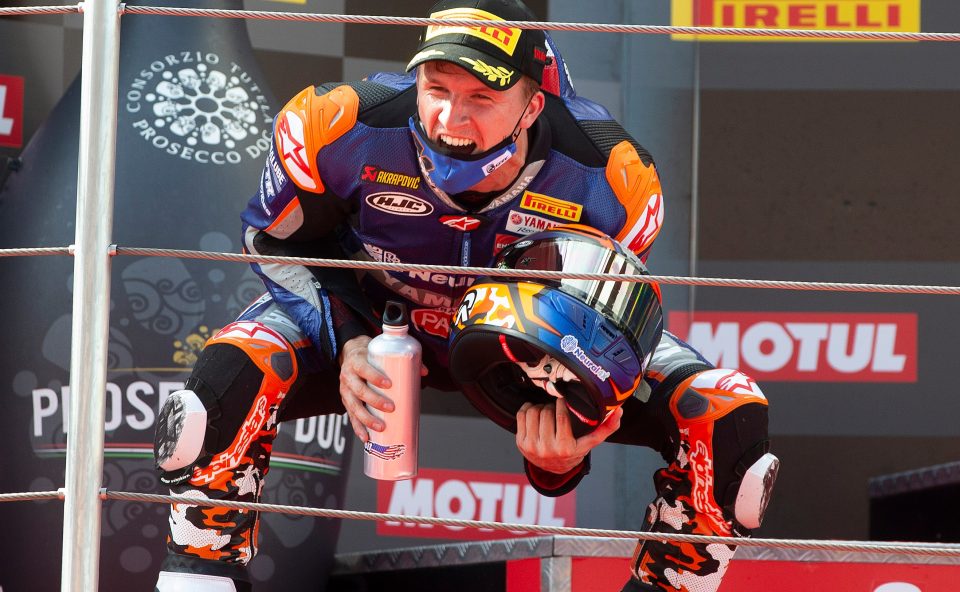 Garrett Gerloff will remain with the GRT Yamaha Junior squad for the 2021 WorldSBK Championship but will be upgraded to factory-specification machinery as a reward for his eye-catching maiden campaign on the international stage.

>Are you looking for Specialist UK Bike insurance – click here

The American will be joined in a revised line-up by All-Japan Road Race JSB1000 Championship leader and Yamaha development rider Kohta Nozane.

Texan Gerloff made the switch to WorldSBK for 2020 having cut his teeth on the domestic stage in MotoAmerica and has proceeded to impress relative to fellow rookie team-mate Federico Caricasulo given his lacking experience of the Pirelli tyres and the circuits.

A surprise run to the podium in Barcelona has been the catalyst for a strong run to the end of the season for Gerloff, so while Andrea Locatelli’s promotion to the factory Pata Yamaha rider was confirmed today, the American will at least get identical machinery.

“I’m just super excited to be staying with the GRT Yamaha WorldSBK Junior Team for the 2021 season. This year has been incredible; the people I work with on the team are exceptional, really positive and awesome people, so to be able to continue with them is fantastic.

>Are you looking for Specialist UK Bike insurance – click here

“It’s going to be nice to hopefully have more of a normal year and to have some consistency in the team will be great for me.

“I’m really excited to be getting the new Yamaha R1 as well. Hopefully it will give us even more performance to take the fight to the current frontrunners in the championship. Thank you so much to Yamaha for continuing with me and giving me another opportunity to improve and show what I can do.

“!I owe them and my team manager Filippo Conti everything. I think that we can do some great things next year and I’m more focused and determined than ever.”

Nozane, meanwhile, will become the latest in a line of Japanese superbike riders to make the switch to the WorldSBK Championship. Nozane currently leads the race to succeed current MIE Honda WorldSBK as Japanese Superbike Champion, while he has started five MotoGP races with Yamaha too.

“I’ve felt WorldSBK would be the best place for me to keep growing as a rider, so I’m really happy to get a chance to race on the world stage again and I can’t thank Yamaha enough for the opportunity. I’ll be up against the best riders in the world on different tyres to what I use now, and almost all the circuits will be totally new to me, so I know it’s going to be a massive challenge.

“But, I take pride in being one of Japan’s top riders, so to live up to the expectations of Japanese fans as well as gain the respect of race fans around the world, I want to make my mark right from the start, so I’ll be doing all I can to be ready to race.

“I’ll be joining the GRT Yamaha WorldSBK Junior Team and Garrett Gerloff has finished on the podium with them in his rookie season, so I know they’re strong and I can’t wait to work and grow with them next year.

“We’re in the middle of this year’s All Japan Road Race Championship and I’m leading in the points, so the goal is to come into WorldSBK as the All Japan JSB1000 Champion. My focus from here is on doing my best in the last two rounds of the season to take the title.”

Nozane replaces Caricasulo, who has struggled to adapt to the rigours of Superbike competition having finished runner-up in the WorldSSP Championship next year. However, there are rumours he could rekindle his relationship with BARDAHL Evans Bros for 2021 if it agrees to become BMW’s satellite entry, as rumoured.