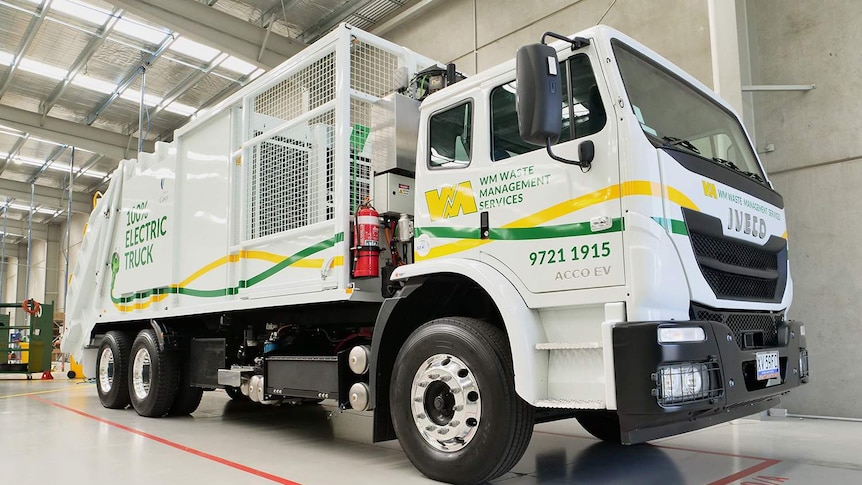 Australia is already well behind in the global race to electrify cars, but truck drivers say they need help to switch over, too.

Just 2 per cent of new car sales in Australia last year were electric, compared with 9 per cent worldwide.

Yet the domestic market for commercial vehicles, like vans and trucks, is effectively non-existent.

The federal government is scrambling to speed up the take-up of electric vehicles (EVs), but the trucking industry says Australia needs to adopt policies that have succeeded overseas — such as less regulation and more support for charging infrastructure.

Mark Hemmingsen, a Canberra businessman who works in the EV industry, says the lack of options is frustrating.

Mr Hemmingsen, who installs EV charging points, had to travel to clients in an old, combustion-engine station wagon until recently.

He finally received an electric van a few months ago.

“Some of the cars that I used to turn up in were embarrassing … so it’s great to have something that’s quite prominent,” he says.

“It makes us stand out, and we can show people that we put our money where our mouth is.”

The van can only travel about 100 kilometres before it must be recharged, though Mr Hemmingsen argues its benefits far outweigh any current inconveniences — and those benefits go beyond fuel savings.

“Once you’ve driven electric, you won’t want to go back,” he says.

“I know the puritans will say ‘it’s not the same as a big V8 or something like that’ and, look, it’s not.

“We have a saying: ABC – Always Be Charging. [But] the smooth drive is amazing, and the acceleration.”

More than 58 models of zero-emission trucks and vans are available in North America, Europe and China, according to the Australian Trucking Association (ATA) and the Electric Vehicle Council.

Yet there are just 14 in Australia —  situation that forced Mr Hemmingsen to import his electric van.

Road transport was responsible about 19 per cent of the nation’s emissions in 2019, and a ClimateWorks Australia report found 38 per cent of those were linked to road freight.

ATA adviser Samuel Marks says emissions from trucking are on the rise because demand for freight is growing.

However, several barriers prevent the trucking industry from adopting zero-emission vehicles, he says.

“That includes regulation – such as vehicle design rules – which are inconsistent with overseas markets, which slows the introduction of new technology.”

And while governments across Australia are increasing the number of charging stations for EVs, Mr Marks says commercial vehicles get left out.

“The trucking industry is quite a price-sensitive industry, on tight margins,” he says.

“Even the limited public charging infrastructure that we have today is not often designed for trucks and their accessibility.

“If you can’t charge your truck, you can’t move your freight.”

Some Australian manufacturers say other countries have better approaches.

SEA-Electric assembles electric trucks based on Hino vehicles at a plant in the Melbourne suburb of Dandenong. It now exports vehicles to clients overseas.

“Commercial vehicles have fundamentally fixed routes on a daily basis – they know exactly how far they’re going to do,” he says.

“We design the power system to be suitable to be able to perform that task, be it 150 kilometres or 250 kilometres in a day.

“Urban applications — start-stop and then back to base, where they charge in the exact same place that they charge overnight — so there’s no need for top-up charging throughout the day.”

Beyond urban areas, Mr Fairweather says hydrogen-powered vehicles will be more suitable to inter-city travel due to the range and speed requirements.

“That’s where it’s really important … that the different types of electric deployments are taken into consideration,” he says.

“Outside of the urban environments … support for either hydrogen or additional fast charging is definitely of need.”

Mr Fairweather says several United States jurisdictions offer examples Australia could follow, such as setting zero-emission-only zones for some traffic, or parking for delivery vehicles only.

“Australia has been disappointingly slow in acknowledging and recognising electrification,” Mr Fairweather says.

“However, I think the new [federal] government have opportunities in this space in picking up that lost time.

“I think there’s actually some benefit from being slow to market – from learning what’s worked in other countries and what hasn’t.”

igst: IGST on ocean freight likely to be scrapped