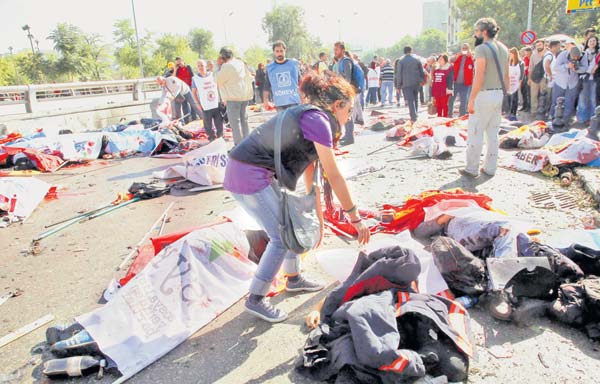 The Turkish military was frustrated with the performance of the government of President Recep Tayyip Erdoğan in clamping down on the sale of fertilizers and gas cylinders that were used in improvised explosive devices (IED) and bombs by terrorist groups including the Islamic State in Iraq and Syria (ISIS).

According to a secret internal memo circulated at the General Staff of the Turkish Armed Forces and obtained by Nordic Monitor, senior military leadership was discussing putting more pressure on the Erdoğan government and raising the issue in the National Security Council (MGK). According to a memo prepared by Maj. Tolga Burak Ekinli, who was leading the department tasked with combatting mines and IEDs, the measures adopted by the Erdoğan government to regulate fertilizer sales had not been implemented.

The sale of fertilizer, which includes explosive ingredients such as ammonium nitrate and calcium ammonium nitrate, was regulated in Turkey by the Ministry of Agriculture based on a circular issued on October 10, 2015 and regulations announced on February 5, 2016. The strict licensing, distribution and sale of such fertilizers were subject to approval, and violators could face from three to five years in prison.

However, the memo noted that there were only five incidents of violations, and the suspects were simply fined for possessing fertilizer without a license. Maj. Ekinli lamented that the local branches of the Agriculture Ministry failed to inform law enforcement about suspicious sales and delivery of fertilizers, therefore undermining the intent of the circular and regulations that were enacted to crack down on the illegal use of chemical precursors in bombs.

A two-page secret Internal military memo on the lack of action on the part of the government in cracking down on fertilizer sales:

The discussion within the military leadership heated up in the aftermath of series of car bomb attacks that took place in various cities of Turkey including its capital Ankara near a military hosing complex that killed many. Some of the attacks were blamed on ISIS, while others were attributed to the outlawed Kurdistan Workers’ Party (PKK). The top military brass planned to bring the issue to a MGK meeting scheduled to take place n May.

The memo, first drafted on April 20, 2016 by Lt. Recep Coskun, was later edited by Ekinli on May 5, 2016 before it was submitted to the General Staff. It appears the issue was brought up for discussion during an MGK meeting that took place on May 26, 2016, although the press release did not mention anything about it specifically.

To ease the pressure from the military, the Turkish Interior Ministry issued a secret circular on a temporary halt to the sale of fertilizers that include ammonium nitrate. The circular was signed by Selami Altinok, undersecretary of the Interior Ministry, and sent to all 81 governors in the country on June 8, 2016.

Secret Turkish Ministry circular on a temporary halt to the sale of fertilizers:

The military also expressed concern at the lack of regulations involving the sale and distribution of kitchen-type gas cylinders that were widely used in IEDs, especially by the PKK. The memo stated that a legal framework must be established to track gas cylinders, although the issue was raised multiple times at interagency workshops.

It was estimated that some 80 million kitchen gas cylinders are in use in Turkey, with 52 companies involved in their sale and distribution. Only Aygaz, a gas firm, implemented a pilot project out of Izmir, printing bar codes for some 1 million in order to track the sales and distribution network.

The procurement of chemical fertilizers for bombs by ISIS was documented by a Turkish national daily. On September 1, 2015 the Bugün newspaper published still shots from CCTV video footage that showed a large amount of materials, including explosives, construction pipes, large metal plates and fertilizer ingredients, being transported to ISIS from Turkey’s Akçakale border gate in southeastern Şanlıurfa province while Turkish customs officials stood by and watched. The day the headline story was published, Erdoğan ordered the police to raid the newspaper.

Bugün was part of the İpek Media Group, the third largest media outlet in Turkey at the time. It was owned by Koza İpek Holding, which was also the owner of two national networks, Kanaltürk and Bugün TV, the Millet daily, one radio station and the English-language news website BGNNews.com.

On October 22, 2015 prosecutors and judges appointed by the Erdoğan government issued a warrant to seize all 22 companies owned by the İpek family, including media outlets. Police officers forced their way into Koza İpek Holding headquarters in Ankara on October  27, using tear gas on protesters who had gathered to support the firm. A similar display of brute force was seen in taking over the media outlets in Istanbul.

Just a month after the daily broke the story on the customs officials, ISIS struck at the heart of the Turkish capital using bombs with ingredients derived from chemical fertilizers. A suspect named Yakup Şahin, who scouted the target before the bombing, gave a statement explaining how ISIS in Turkey purchased and moved fertilizers. He revealed how his boss and also ISIS suspect Halil İbrahim Durgun directed him to purchase 1.5 tons of ammonium nitrate two weeks before the Ankara attack.

There were several other court cases that also revealed the sale and distribution of fertilizers to ISIS and other terrorist groups. But these cases were hushed up by the Erdoğan government, and no real investigation was conducted to ascertain the masterminds.

In late November 2015 police raided a storage space operated by ISIS in Gaziantep’s organized industrial center at Küsget where investigators found 120 tons of ammonium nitrate. In a raid on another cell in the city on October 20, police found ammonium nitrate, suicide vests and steel balls used for bomb-making.

The Turkish military was furious when a car bomb attack was carried out on military shuttles in Ankara, killing 29 people and wounding 60, on February 17, 2016. The attack happened at the heart of the Turkish capital on Merasim Street, near government buildings, military headquarters and the Turkish Parliament; it targeted a convoy of shuttles carrying both civilian and military personnel working at military headquarters during the evening rush hour. The government initially blamed the attack on the Kurdish People’s Protection Units (YPG), a Syrian Kurdish militia that has been supported by the United States. Authorities identified Salih Necar, a Syrian national, as the suicide bomber. However, DNA evidence collected from the blast site showed that Turkish national Abdulbaki Somer, born in the eastern Turkish city of Van, was actually the bomber. The Kurdistan Freedom Hawks (TAK), affiliated with the outlawed PKK, claimed responsibility for the bombing.

In February 2016 an EU-mandated study by Conflict Armament Research (CAR) found that 13 Turkish firms were involved in a supply chain that included fertilizers for ISIS. On March 18, 2016 Russia submitted a letter to the UN Security Council identifying Turkish companies that had supplied chemicals to ISIS. The letter said 2,500 tons of ammonium nitrate (worth $788,700) was sent to Syria from Turkey in 2015.

In February 2017 the Erdoğan government lifted the restrictions on the sale and use of fertilizers.