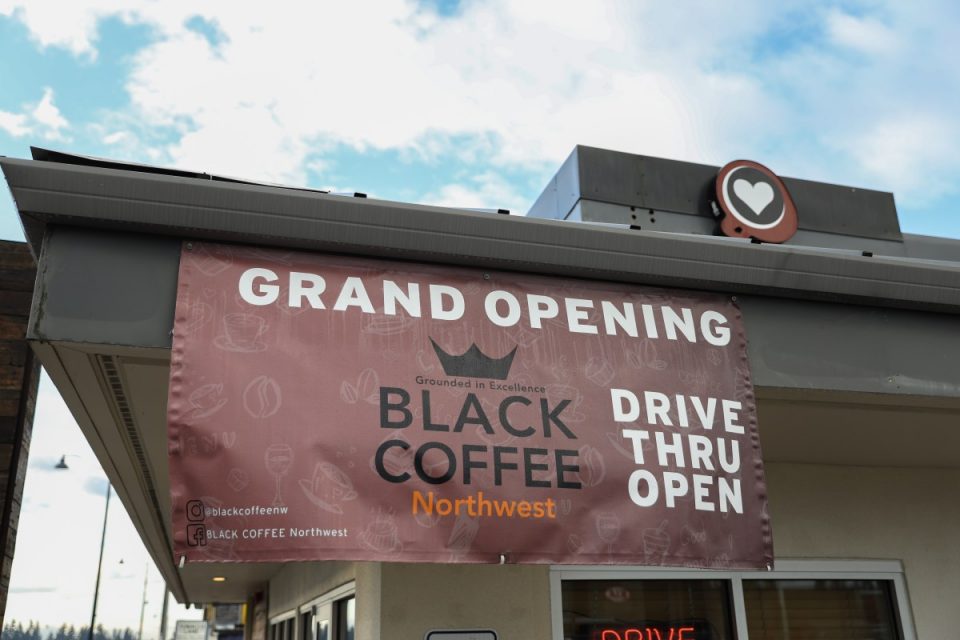 In Shoreline, only 5.9% of the population identifies as Black. Yet with the opening of the new coffee shop and community hub Black Coffee Northwest, Shoreline happens to be the only place in the Seattle area that you can find a coffee drink called “the Karen” — their best-selling white chocolate mocha named after a widespread meme for a particular brand of entitled, cop-calling white lady — from Black baristas trained in anti-racism.

The bold new cafe is the careful design of owners Darnesha and Erwin Weary, who opened Black Coffee NW on October 17 — in spite of the pandemic and an arson attempt — to disrupt Seattle’s white-dominated coffee industry and create an urgently-needed community space that highlights and supports Black lives the North End.

“We want Black Coffee to be a place where people come to have a cup of coffee and … leave having a new thought or idea, or meeting a neighbor that they would have never spoken to, or meeting that Black person they may have grabbed their purse at [on] the street,” said Weary. “In the very fabric of this place, we live and breathe that [mission.]”

Sure enough, racial justice underpins not only the business name, but the way the Wearys vet their vendor relationships, their practice of hiring and training Black baristas, even the handling of the coffee itself. The coffee at Black Coffee is sourced from their wholesaler, Efrem Fesaha, founder and CEO of the Renton-based and Black-owned café Boon Boona, which roasts coffee beans it sources straight from Africa.

“What we found is that there’s not a lot of Black people in [the specialty coffee] space at all. We want to change that,” said Weary. “Every bean of coffee that comes in there, every fork, knife, spoon — everything — we’ve made sure that the people that were creating [them] were socially responsible. So it just lives and breathes.”

This work is second-nature to the Wearys. Not only is Darnesha Weary an racial equity business consultant who coaches businesses and individuals on how to be anti-racist, but for almost twenty years, she and her husband have been prominent organizers and advocates for the Black community in north Seattle.

It all started in 2000, when Darnesha Weary had the idea to start a step team at the Boys and Girls Club in Greenwood for Black girls in the North End. Ever since, Northside Step Team has provided girls ages 5 to 18 with the opportunity to engage with their community and culture and has inspired many youths to get involved in the fight for social justice.

Twenty years later, the Wearys are still involved with the team, and it’s evolved into a platform for empowering North End Black youth to take social justice into their own hands. In fact, many of the current members of the step team — including the Wearys’ 17-year-old daughter Mikayla Weary — have gone on to form Black Lives Matter groups at their Shoreline-area schools, run successful accounts on social media that draw attention to racial injustice, and even single-handedly organize the city-wide Black Lives Matter March in Shoreline on June 6.

Weary says part of her objective in opening Black Coffee Northwest was to create a designated space for the activism work being done by “her kids” and also a space where Black people in Shoreline can feel a sense of support and belonging — something she struggled to find when she relocated to Lynnwood with her mother at age 12 after spending her early childhood in South Seattle.

But Weary doesn’t want the space to be an echo chamber, either. She hopes it will become a hub for honest conversation about social inequities in the community, and though the pandemic has prevented the shop from opening its doors to in-house guests (right now, only the drive thru is open), Weary has already begun defining Black Coffee Northwest as a place for these discussions on social media and one-on-one through Zoom.

“I do a lot of Zoom calls,” said Weary. “[When we open for dine-in,] we’ll do a lot of community meetings and coffee talks and … community forums.”

Weary is already having a lot of conversations with community members virtually, because even just the name Black Coffee Northwest has stirred up controversy. They’ve gotten a lot of flak for calling out “Black” in their business name and reiterating that their shop is a Black-owned business. What’s more, Black Coffee Northwest’s location on Aurora Avenue was the target of an arson attempt on September 30th, which the Wearys told King 5 they believe was racially-motivated.

Weary says much of the response from the community has shown her just how far Shoreline has to go in understanding social injustice. But that’s not enough for the Wearys to throw in the towel — they’re stalwart in their mission of supporting Black families in the north Seattle area, because with the pandemic and the social uprising in response to the death of George Floyd, they say a space like this is needed more than ever.

“Equity needs action,” said Weary. “So, we [told ourselves we] need to take that action, take a bold step, and just do it.”

Alexa Peters is a Seattle-based writer.