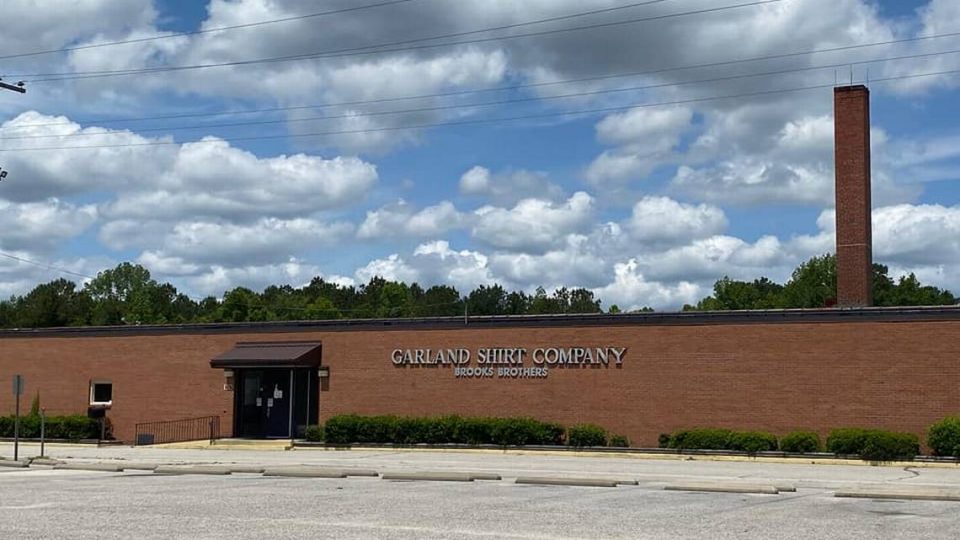 The Garland Shirt Co., owned by Brooks Brothers, is closing permanently due to the coronavirus pandemic.

Brooks Brothers is shutting down its shirt factory in Garland, a move that will eliminate nearly 150 jobs in the small Sampson County town where the clothing maker is the largest employer.

Brooks Brothers notified the N.C. Commerce Department about the closure on May 13 in a Worker Adjustment and Retraining Notification.

In a letter to the Commerce Department obtained by The News & Observer, Brooks Brothers cited “unforeseen business circumstances” related to the coronavirus pandemic as its reason for shutting down the factory. The location will close permanently on July 20, the letter states.

Brooks Brothers told the state that the closure will lead to 146 positions being eliminated, 111 of which were unionized positions.

The company said in its letter that state directives limiting retail activity have drastically changed the company’s business.

“[D]irectives for individuals to avoid congregating, limit retail operations and to work remotely was unforeseeable and caused, and will continue to cause, among other things, a drastic impact on the Company’s business,” Mary Pytko, the company’s head of global human resources, wrote in its WARN filing.

As recently as just a few weeks ago, Brooks Brothers was touting the plant’s ability to make surgical masks and protective gowns in response to the pandemic.

In a statement to The News & Observer, a company spokesman said, “In the ordinary course of business, Brooks Brothers consistently explores various options to position the Company for growth and success. As part of this assessment, it is possible that our factory in Garland (NC) would close. We delivered WARN notices this week to the impacted employees in order to provide workers with sufficient time to prepare for potential loss of employment.

“This decision is subject to change, should alternative solutions be uncovered in the near-term. The factory is incredibly meaningful to our heritage and we value our employees. All opportunities on the table are still being explored to avoid this difficult outcome.”

A symbol of the town

Garland, about 80 miles southeast of Raleigh, was home to one of only three Brooks Brothers factories in the U.S., The News & Observer previously reported. The others are in Haverhill, Mass., and Long Island City, New York. The Garland plant was the only U.S. factory making the classic button-down Oxford shirts.

Brooks Brothers CEO Claudio Del Vecchio told the New York Times in 2018 that the Garland factory was the only domestic plant that operates at a loss.

In 2018, Brooks Brothers closed a popular outlet store in Garland associated with the factory.

The deals at the store were legendary — a News & Observer story in 2006 noted that a shirt could go for $15, a wool jacket for $39, three khaki pants for $10. And even though Brooks Brothers never advertised the outlet’s existence, people would drive hours out of their way to shop at the store.

Garland Mayor Winifred Hill Murphy said in a phone interview that it’s a “devastating loss” for the town of 620 people. She said the plant’s closure will both hurt financially and emotionally, as it was in many ways the symbol of the town.

“We have been known for Brooks Brothers,” she said. “Before the retail store closed people would travel here from hours away. It has given employment to a great number of people.”

Murphy said she had been concerned about the future of the factory for years, and that she wasn’t “blown away” by the news. The plant had steadily lost jobs in recent years.

Murphy added that the closure will negatively impact other smaller businesses in the town as well as Garland’s budget going forward.

“My prayer and hope is that we will be able to find other jobs” for these people, she said. “I am praying that something can happen between now and July. We are praying that another company will be interested in buying the factory.”

Follow more of our reporting on Coronavirus in North Carolina

END_OF_DOCUMENT_TOKEN_TO_BE_REPLACED

Container import roller coaster: down, up, down … up?

Worker killed, 3 injured in blast at electronics factory in Bollaram