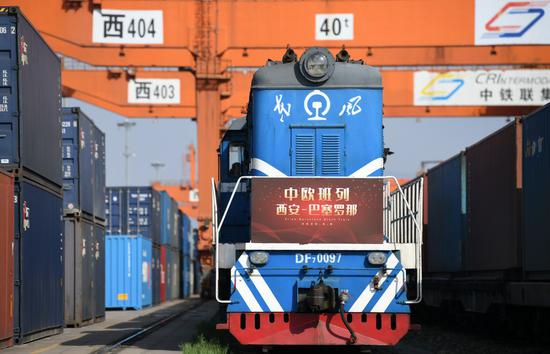 Xi’an, capital of northwest China’s Shaanxi Province and home to the Terracotta Warriors, saw a surge in China-Europe freight train journeys in the first eight months of 2020, according to the freight train operator.

The Chang’an China-Europe freight train service operated 2,439 trains in the January-August period, up 90 percent from the same period last year, according to the Xi’an International Trade & Logistics Park.

Both the cargo volume and the number of train journeys ranked first among major cities nationwide.

Since March 19, 2011, China has been launching international container freight train services linking many cities across the country with destinations in Europe as well as Asia.

Since its launch in 2013, the Chang’an service has opened 15 trunk routes linking Xi’an with destinations in Asia and Europe, covering 45 countries and regions along the Belt and Road.

The cargo transported has expanded from oil drilling equipment in the initial period to 13 categories of goods, including automobiles, kitchen utensils, and daily chemicals.

The service has also launched land and sea transport routes connecting Xi’an with the eastern Chinese ports of Qingdao and Ningbo to send goods to more destinations around the world.