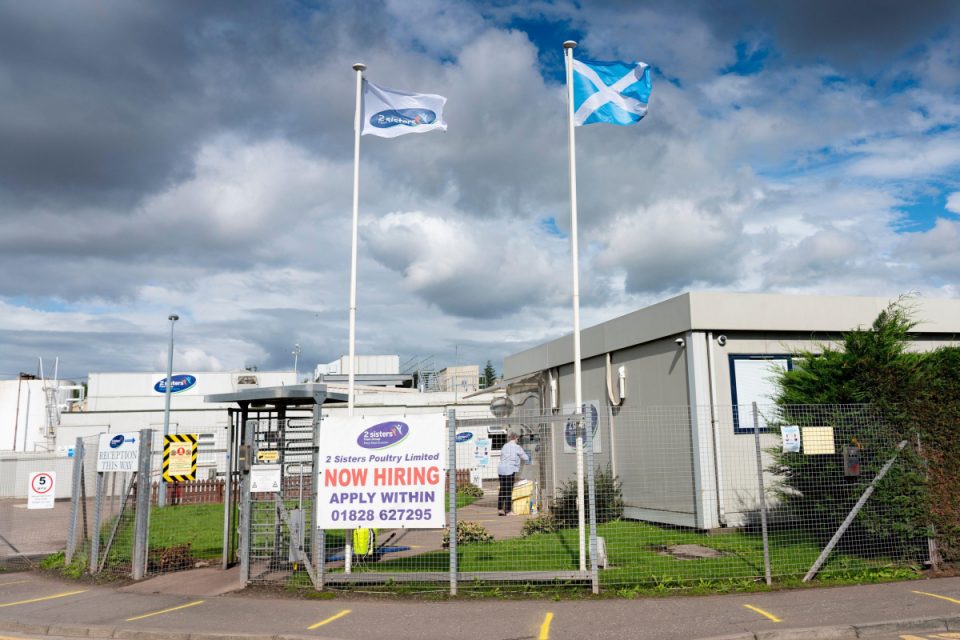 STAFF at a chicken factory attended a Hogmanay house party despite their workplace being in the midst of its SECOND coronavirus outbreak.

More than a dozen workers from the 2 Sisters plant in Coupar Angus, Perthshire, went to the illicit bash at a flat in the town centre.

The Covid cluster at the factory – which stood at seven cases at the end of last year – has now shot up to 30, with the vast majority of the New Year revellers now self-isolating.

In August, the ENTIRE workforce was told to self-isolate after more than 150 cases linked to the 2 Sisters abattoir.

More than 900 staff were put in quarantine and told to stay home or lose their pay. But video footage appeared to show some staff breaking the rules just yards from a Covid test centre.

The Courier reports that staff were fingered by neighbours and co-workers after footage and pictures emerged of the party.

Staff at 2 Sisters were given “extensive guidance” on community conduct following the breach last year.

And bosses confirmed any workers found to be breaching Covid rules would face disciplinary action.

Local politicians have blasted the “idiotic” and “flagrant” flouting of coronavirus restrictions.

John Swinney, MSP for Perthshire North and Deputy First Minister, branded it “a hugely regrettable breach of the current guidance”.

He said: “The actions of those in attendance at the party are idiotic and utterly indefensible, particularly as we see rising cases across the region.

“Following such a breach, it is vital that the correct public health protocols are followed to minimise the risk to others in the community.”

The former Runrig rocker said: “Given the significant sacrifices that we all made this festive season, I am sure that this incident will be lambasted by residents across Perthshire.

“The rules are in place for a reason and it is extremely disappointing to see people ignore them in such a flagrant manner.”

Footage of the illegal party, which went on until the early hours of January 1, is understood to show a group mainly consisting of young men.

Scots Covid deaths soar by 93 overnight as another 1,865 cases confirmed

The workers are seen at an outdoor barbecue before clips of them at a flat party with booze, music and disco lights.

A spokesperson for 2 Sisters said: “Last year, all colleagues were given extensive guidance on conduct in the community and how to keep Covid safe in a shared household.

“Any colleague suspected of breaching guidelines will be subject to disciplinary action.