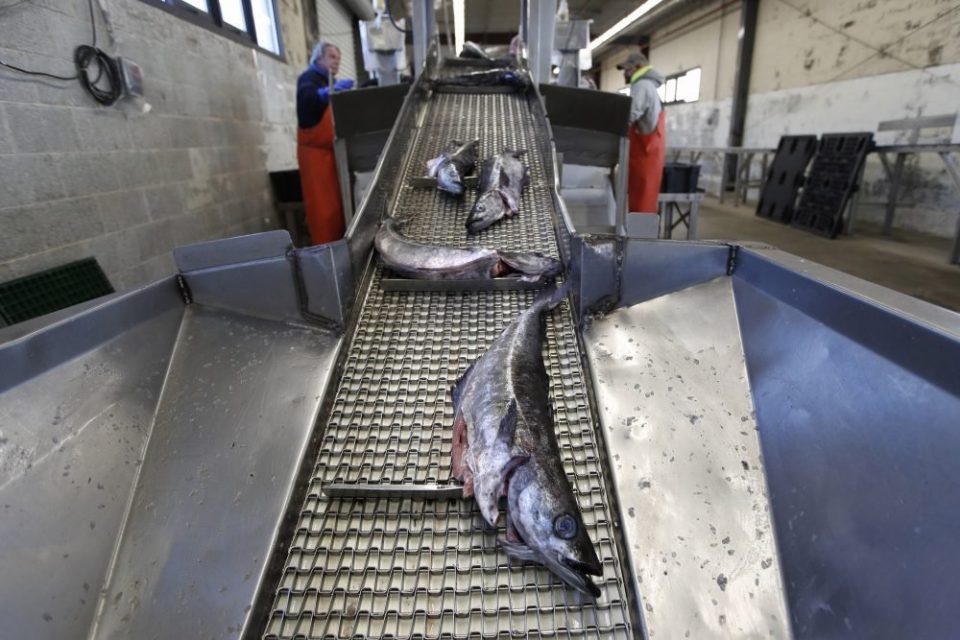 Pollack moves up a conveyor belt to be sorted for auction at the Portland Fish Exchange on March 25. The seafood industry has been upended by the spread of the coronavirus, and that has drastically cut the amount of seafood at the city-run auction. Associated Press/Robert F. Bukaty

The Portland Fish Exchange, the city-operated fish auction, is losing about $30,000 a month and is asking another city agency to help bail it out through the middle of next year.

The daily auction, where fishermen sell their catch to buyers from seafood wholesalers and processors, has cut losses somewhat over the past few years and has made slight adjustments to cut expenses, said Tom Valleau, chairman of the Fish Exchange board.

But fish landings plummeted this summer, mostly likely the because of disruptions caused by the pandemic, and the losses accelerated, Valleau said.

“Now we are beginning to see a slight upward trend, but we have difficult times ahead without a doubt,” he said in a letter that he will ask the exchange board to let him present to the Fish Pier Authority along with the request for financial aid.

The exchange handles about 90 to 95 percent of the groundfish catch landed in Maine, Valleau said. If it closes, it could be the death knell for the industry in the state, Valleau said, because almost all fisherman would take their catch to Massachusetts.

Valleau said the exchange is turning to the Fish Pier Authority because it normally runs at a surplus of $200,000 to $300,000 a year through leasing parking spaces to commuters at its large parking lot.

If the authority agrees to cover the exchange’s losses, “it does not solve our problems, it just gives us operational comfort through the end of the (fiscal) year,” Valleau said.

The exchange could use the time to try to fix its financial problems or could consider shutting down, he said.

The exchange board meets Thursday and the next meeting of the Fish Pier Authority is Monday.

The auction earns about 25 cents on each pound of fish sold, with the fee split between buyers and sellers. Valleau said the drop in volume has brought losses to about $30,000 a month. The exchange has drawn almost all of its $100,000 bank line of credit and is hoping the Fish Pier Authority will agree to cover losses through next June as the exchange ponders its future, he said.

“We are now operating at a monthly loss of about $30,000, based on expenses of $85,000 and income of $55,000,” Valleau said in the letter. “It is likely that this will continue until the COVID situation resolves, the restaurant sector recovers, the unemployment rate is reduced, and the Maine economy shows clear signs of a recovery.”

The Fish Exchange opened in 1986, part of the city’s commitment to a working waterfront by giving fishermen a place to sell their catch, Valleau said.

Valleau said the exchange primarily handles the catch of dayboat fishermen who head out in the morning and return to port later the same day. Fishermen who travel greater distances and typically stay out a week or more usually take their catch to ports in Massachusetts, where the market is bigger, he said.

One other reason for fishermen to switch to Massachusetts is that state’s looser rules on lobster bycatch, Valleau said. Lobster that gets scooped up in nets along with fish in Maine must be tossed back, but they can be kept and sold in Massachusetts, he said.

Nick Mavodones, a city councilor who chairs the Fish Pier Authority, did not respond to an email seeking comment on the exchange’s problems and the request for funding.

Where to Live If You Want to Dodge Natural Disasters

When do I have to take my IRA distribution under the SECURE Act?