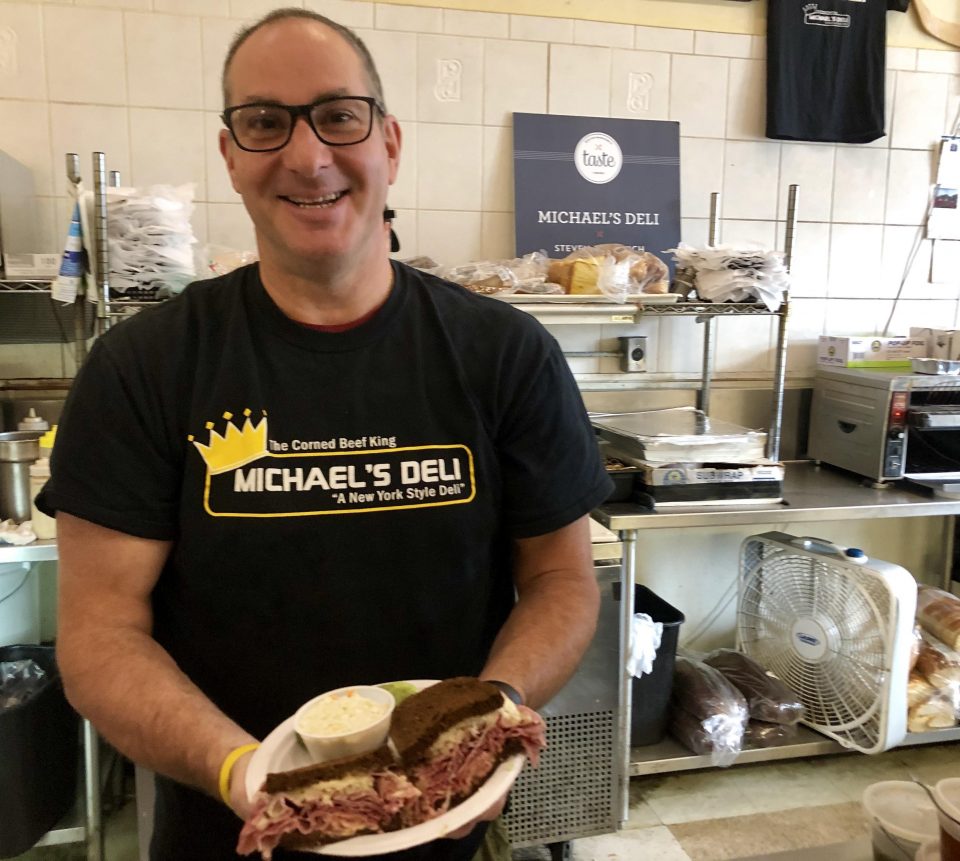 Another week is in the books at Michael’s Deli in Brookline, but owner Steven Peljovich doesn’t get to rest just yet. First, he’s got to experiment a little and plan out next week’s “Krazy Knishes” — a revolving assortment of traditional Jewish pastries with non-traditional flavors.

He’s done brisket knishes, cheeseburger knishes, fried rice knishes and even birthday cake knishes. It’s just one way Peljovich, who has owned Michael’s since 2012, infuses a bit of his personality into the food and puts a modern twist on deli staples.

“It’s a distraction from the everyday business that we do, and it’s a nice way to interact with my regulars, who look forward to finding out what it is that I’m going to be coming up with,” Peljovich said of his knish experiments.

Of course, the “Corned Beef King” also serves up many familiar favorites, keeping alive the town’s long-held deli tradition. Brookline was once a destination for old-school Jewish delis, with generations raised on the now-closed Rubin’s Deli, as well as Jack and Marion’s.

“My earliest memories are probably Jack and Marion’s in Coolidge Corner — probably a lot of what I modeled myself after,” said Zaftigs Delicatessen owner Bob Shuman.

You’ll find deli classics like Reuben sandwiches and smoked fish on the menu at Zaftigs, which has locations in Brookline and Natick. You’ll also find non-traditional dishes, like the peanut noodle salad or latke piccata.

The decision to branch out was a deliberate one, Shuman said, adding, “It’s a different palate now than it used to be.”

“From the outside looking in, people perceive [Brookline] as this Jewish enclave, and it so isn’t,” he said. “It’s interesting — I think we appeal to a stronger Jewish population in MetroWest than we do in Brookline. I think it speaks to the diversity of Brookline.”

When it comes to delis, the game has changed significantly since the days of Jack and Marion’s, he said.

Some customers still grumble about Zaftigs selling non-kosher items, while others come in expecting a $7 sandwich piled high with deli meat, according to Shuman. But as more and more local Jewish wholesalers have closed shop over the past decades, the overhead for delis is costly, he said.

While classic delis have grown increasingly scarce in recent years, one thing remains unchanged: the recipes.

“I think that’s what our strong point is, that we don’t change. People want consistency, and when you come and get a pastrami sandwich, you want it to taste exactly like it did last week,” said Lisa Rodman, owner of Barry’s Village Deli. “And when you go messing around with recipes, you’re going to cause trouble. So if it’s not broken, don’t fix it.”

There are specific smells and tastes people expect from delis, Peljovich agreed. “It’s corned beef, it’s pastrami, it’s chopped liver, it’s knishes, it’s kugel — it’s all the very olden recipes that people have passed down from generation to generation, and every family has one,” he said. “It’s what people expect when they walk into a place.”

They can also expect to be treated like family.

“It’s not common, the sort of Cheers, ‘where everybody knows your name.’ People say they want to do that or they want to try to be like that, but you can’t fake it,” Peljovich said.

“The old-school deli, that’s what it all was. You knew all the counter people. You knew the people at the front door. You knew the owners,” he added. “You knew everybody who was there, and they knew you.”

Classic Jewish deli food is “the fabric of some people’s lives,” Rodman said. “They come here all the time, and they love it, and they enjoy that food. … When it comes to the Jewish holidays — Rosh Hashanah, Yom Kippur, Passover — it’s vital that we’re here, because we’re one of the few people that supply the food for that holiday.”

Now the COVID-19 pandemic has tested delis’ community nature, keeping families and neighbors socially distanced and cutting down on the typical hustle and bustle of dine-in establishments.

Things could get worse in coming months, Peljovich said, as cold weather forces restaurants to cut back on outdoor dining.

Zaftigs has created an in-house bakery in the hopes of generating more business, making homemade bagels, rugelach, babkas and bialys, according to Shuman.

“I think when this pandemic first broke out, we thought it would be like a bad snow storm — a couple soft weeks and we’d be back up on our feet. Two weeks turned into four, four weeks turned into ‘this is the new normal for right now.’”

But, he said, “We’ll face this challenge head-on as we have every challenge we’ve been faced with, and we’re going to make the best of it.”

Rodman sees a bright future for delis, largely due to the passion and dedication of those in the industry.

“We’d like to stay as long as possible and just carry on this tradition that so few people are doing,” Rodman said. “People say, ‘How do you stay in this business? It’s so hard.’”

“I say, ‘It is a very hard business, but I think if you’re committed to something with passion, you can do anything,’” she added. “So that’s our goal, to keep going.”