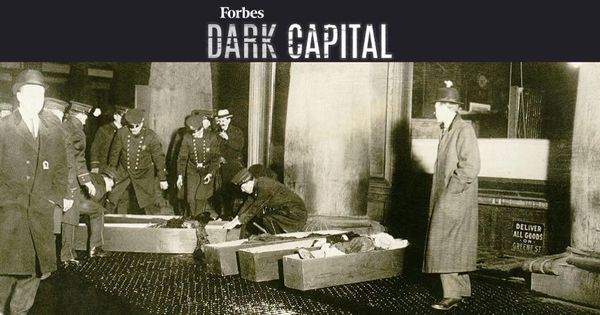 Dark Capital is a series that explores the intersection of business, wealth and crime. It’s featured on Sundays.

Triangle Waist Co.’s owners, Max Blanck and Isaac Harris, were at the peak of their success as shirtwaist manufacturers when a fire broke out on March 25, 1911 at their factory just off Washington Square Park in New York City. Apparently sparked by a carelessly tossed cigarette, the fire spread quickly, trapping hundreds of low-paid garment workers.

The lucky ones managed to escape down a stairwell or squeeze into an elevator while it still worked or flee to the roof. But 146 people—almost all female, mostly Jewish and Italian immigrants, some as young as 14—died in the blaze. Some burned to death amid the rows of sewing machines on the loft building’s top three floors; others jumped from the windows to escape the flames.

That fire, as David Von Drehle masterfully recounts in Triangle: The Fire That Changed America, changed the course not only of New York, then ruled by a corrupt Tammany Hall, but also of the country, as workers’ rights advocate Frances Perkins, who witnessed the fire, eventually became labor secretary under FDR. An investigation by a New York factory commission, set up that June, resulted in new regulations at the state level. And out of the fire’s ashes America got the New Deal: Social Security, a 40-hour work week, a minimum wage rule and a ban on child labor.

The fire is still regularly invoked—particularly now, amid a revival of progressive politics on the left— as shorthand for corporate power left unchecked by government. In a rousing speech for her Democratic presidential campaign in Washington Square Park in September, Senator Elizabeth Warren cited the tragedy as an example of a corrupt political system. “It was,” she said, “one of the worst industrial disasters in American history. One of the worst, but it should not have been a surprise.”

Many things went wrong that day. There were no sprinklers, which weren’t then required by law.  Fire department ladders could reach only the sixth floor, way below where the desperate workers needed help. But there was also apparently a locked exit door, and questions after the tragedy about whether Blanck and Harris—who were both on the tenth floor that day and survived by running to the roof—were responsible for it. They were indicted for manslaughter that April, and the trial in December would hinge on whether they had locked the door to prevent theft, trapping workers in the blaze.

“Triangle was considered a modern factory for its time”

Isaac Harris was born in Russia in 1865, and Max Blanck was born there three or four years later. They came to America in their 20s as part of the great wave of Jewish immigration. By the early 1890s both men had settled in New York City, and like many Jewish immigrants of the time, they entered the garment business.

Sweatshops were rampant then. Most clothes were sewn by pieceworkers who labored in tenements for 80 or more hours each week. Blanck, newly married, set up shop as a garment contractor. A skilled salesman, he was doing well enough by 1895 that his brother Isaac was able to join him in New York; two other brothers, Harry and Louis, followed later. Harris, more skilled as a tailor and married to a cousin of Blanck’s wife, became his partner.

Their first operation was a little shop on Wooster Street, near where they lived at the time. But in 1902, the Triangle Waist Company moved to a new, ten-story loft building off Washington Square Park. Blanck and Harris leased the ninth floor of the Asch Building and continued to expand until they had taken over three floors.

Demand for ready-to-wear clothes was soaring, and “shirtwaists,” styled after menswear, allowed women more movement than the Victorian-style bodices that preceded them. By 1908, sales at the Triangle factory had hit the $1 million mark (nearly $30 million in today’s terms), and Blanck and Harris—known as the Shirtwaist Kings for their success—had become rich. Eventually Harris and his family moved uptown to a townhouse on West 101st Street, while Blanck and his family settled in a mansion on Ocean Parkway in Brooklyn. Both got around town in chauffeured cars—a big deal at the time as Ford had only begun producing its Model T in 1908—and relied on household staff to help cook and do mundane chores.

For their workers, life was difficult. Hundreds lined up in rows over sewing machines in their factory, working six days a week for minimal pay. Many were subcontractors instead of employees, giving them few rights. And Blanck and Harris were staunchly anti-union, using thugs to quash organizing activities at a time when sweatshop workers were picketing for a 52-hour week and better working conditions.

Still, for its day, compared with the sweatshops of few years earlier, the three-floor Triangle factory was light, spacious and state-of-the-art. “What is rarely told (and makes the story far worse) is Triangle was considered a modern factory for its time. It was a leader in the industry, not a rogue operation,” writes Peter Liebhold, a curator of industrial history at the Smithsonian’s National Museum of American History.

Fires were common then, with few regulations to stop them or limit their damage. The owners didn’t hold fire drills, which were voluntary at the time. When fires happened at the Triangle factory previously, as they had a handful of times, the owners and managers fought them with water from pre-filled buckets that were stationed around the factory.

Months before the Triangle tragedy, in November 1910, fire broke out at the Wolf Muslin Undergarment Co. on the fourth floor of an industrial building in Newark, New Jersey. That blaze killed 26 workers, some as young as 16, many of whom jumped to their deaths. More than 100,000 people flocked to Newark to protest the next day, but little changed.

At about 4:45 p.m. on that fateful Saturday, some 500 workers at the Triangle factory were getting ready to end their workday. The bell had rung, and some gathered their coats to leave. The fire began on the eighth floor, sparked apparently by a cigarette dropped by one of the few male workers at the shop. It spread rapidly, igniting cuttings of lightweight fabric under the tables.

Harris testified that when he realized what the commotion was about, he pushed workers into the elevator until the packing room caught fire and he didn’t believe the elevator would be able to come back up. “I started to holler, ‘Girls, let us go up on the roof—get on the roof.’ And we all rushed and I cried to them to go up the Greene Street stairs, and at that time the smoke was very thick in the room there and it was getting very dark.”

But the workers on the ninth floor lost precious minutes as a telephone operator fled rather than alert them to the fire, which they couldn’t yet see. At the cry of “Fire!,” seamstresses ran in all directions. Some made it to the roof, and others escaped down the elevators or down a passable staircase.

With the firemen’s ladders too short to reach beyond the sixth floor and one of the exit doors apparently locked, most were not so lucky. “Street strewn with bodies; piles of dead inside,” the New York Times wrote, tallying the tragedy’s toll in its front page story. Later, relatives struggled to identify the dead, many of whom were charred beyond recognition. Six victims of the fire—including a man engaged to be married to Blanck’s cousin—were not identified until 2011.

“I couldn’t stop crying for hours, for days,” recalled Rose Cohen, who survived the Triangle fire. “Afterwards, I used to dream I was falling from a window screaming.”

“Blame Shifted on All Sides for Fire Horror,” the front page of the New York Times’ headline blared on March 28 as fingers pointed at the building’s inadequate fire escapes and the way the doors opened inward rather than out. On April 5, 100,000 people joined a procession up Fifth Avenue as another 400,000 watched from the sidewalks. In June, New York legislators created a factory investigating commission that ultimately led to reforms.

On April 11, Blanck and Harris were indicted on charges of first- and second-degree manslaughter. Prosecutors charged that a door on the ninth floor had been locked, a violation of law that trapped workers inside as the fire raged.

More than 100 witnesses testified at the criminal trial in December. The door, many said, was kept locked to keep employees from stealing. Prosecutors charged that the owners knew the doors were locked that day, a key issue at the trial. “Those who ran to that door cried out, ‘That door is locked. My God, we are lost.’ They were lost. That locked door barred their escape,” prosecutor Charles Bostwick said in his opening statement.

Max Steuer, one of the top defense attorneys of his day, poked holes in the witnesses’ testimony and made it appear that a key witness’ story had been rehearsed. On December 27, the all-male jury returned a verdict of not guilty after less than two hours of deliberation. “Isaac Harris and Max Blanck dropped limply into their chairs as their wives began sobbing quietly just behind them,” writes Von Drehle in Triangle.

The Shirtwaist Kings snuck out of the courthouse into the cold December evening. As they walked to their limousine around the corner, a young man whose sister had died in the fire accosted them, shouting, “Murderers! Murderers! Not guilty? Not guilty? Where is the justice?”

After the trial, Blanck and Harris tried to keep the Triangle Waist Co. in business. They reorganized their partnership and moved to a location on Fifth Avenue not far from the old Triangle, where they operated for several years before following the rag trade uptown to West 33rd Street. But eventually the partners drifted apart. Harris went back to being an independent tailor, while Blanck set up various companies with his brothers, the most prominent of which was Normandy Waist Co.

In 1914, civil suits were settled for an average $75 per victim. The Shirtwaist Kings’ payout from insurance, however, was $60,000, or more than $400 per dead worker. An inspection at Blanck’s factory on Fifth Avenue in 1913 found that he had locked the doors during working hours. He received a fine of $20.