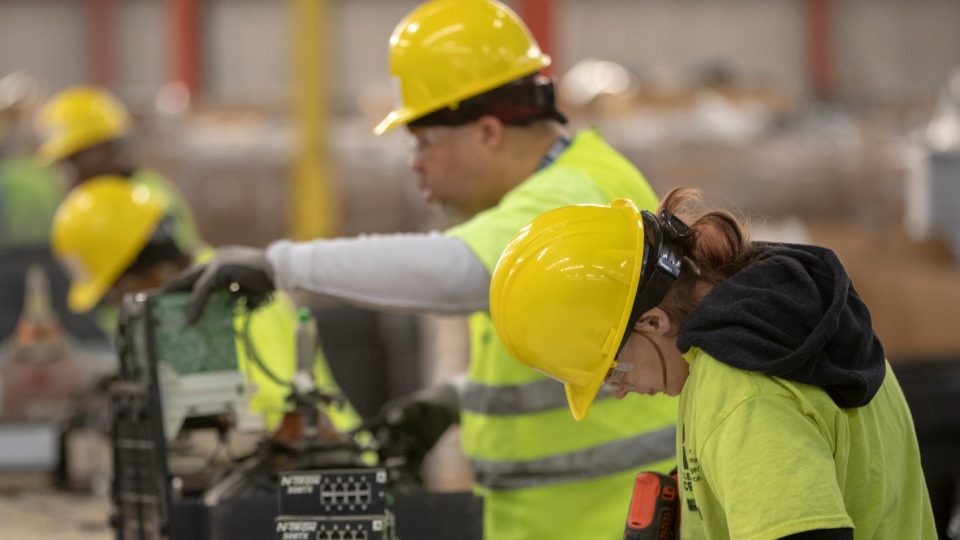 Ray’s Recycling sorts recycled materials for reuse. Take a look at how the recycling is done, saving tons of material from ending up in a landfill.

Recycling diverts tens of millions of tons of waste from landfills each year, saving almost 200 million metric tons of greenhouse gas emissions and providing a second life to a mountain of cardboard, plastic and aluminum goods.

But this represents a fraction of all recyclable goods. The rest is headed for the landfill.

Although 75% of waste is recyclable, only about 35% is actually recycled.

And while it’s great to toss all of your Amazon boxes and soda cans into your bin, there are also a lot of objects in day-to-day use that could be recycled, albeit in a different place.

Scrub Hub: What are the do’s and don’ts of recycling and how do I become better at recycling?

Only about one-quarter of electronic waste is recycled in the U.S., even though it often contains high-value materials such as copper and iron. And only 9% of plastic bags and wraps were recycled in 2017.

In recent weeks, IndyStar has explained what to recycle, what not to recycle, and where it goes after it’s picked up from your curb through our Scrub Hub initiative.

But although we covered the basics, we continued to hear from you with questions about all of the other materials that have a recyclability status a little less, well, intuitive.

So, for today — America Recycles Day — IndyStar spoke with Allyson Mitchell of the Indiana Recycling Coalition to get answers on the materials we hear most about.

Can it go in my blue bin?

If you have a question about whether one of your objects is recyclable, the first thing to do is check with your service provider, Mitchell said. The two main waste management providers in Indianapolis are Ray’s and Republic, and they differ slightly on what they will accept.

Cardboard and aluminum cans are pretty much a safe bet, Mitchell said. Plastics are also important to recycle, but only plastics with the number 1 or 2 in the middle of the recycling symbol. Plastics with a different number in that symbol are a lower quality, she said, and are harder to recycle. 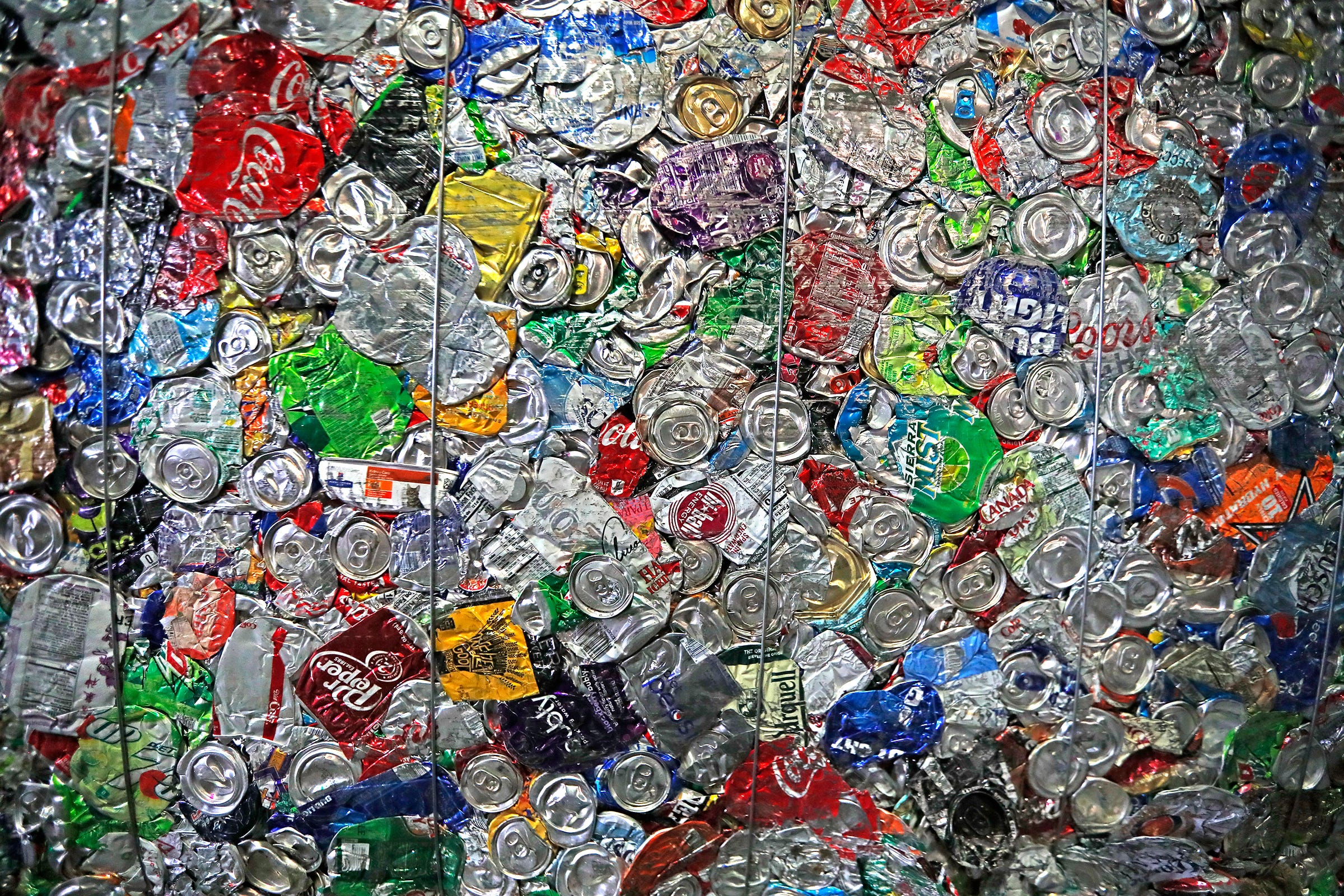 Flattened cans are bound together at the end of the recycling process at the Ray’s Indianapolis Recycling Facility, part of Ray’s Trash Service, Thursday, Sept. 3, 2020.  (Photo: Kelly Wilkinson/IndyStar)

These plastics with number 1 and 2 designation include items such as shampoo bottles, soda bottles and more. It does not include plastic bags, which should never be thrown into a bin because they jam up the machines during the recycling process.

Paper goods, which includes newspaper and envelopes, are also good to recycle in your bin, as long as they lay flat. Tissue paper and paper towels, on the other hand, are not recyclable.

Is it recyclable somewhere else?

Some objects are recyclable or partially recyclable, but they can’t be thrown in the blue bin because recycling facilities are designed to sort through a specific set of materials.

Here’s what Mitchell says to do with some of the common items we hear the most questions about.

Plastic grocery bags, produce bags and other thin plastic bags are recyclable, Mitchell said, although not in your blue bin. If it’s the type of material that stretches when you pull it, it can be recycled at collection boxes toward the front of most grocery stores, such as Kroger or Target.

Bad news: The vast majority of the campaign signs that have dotted yards for the last few months are not recyclable, Mitchell said.

Some signs, which seem to be made of a thin, bag-like plastic, might be recyclable in the same drop off locations for grocery bags, but it’s important to call and check — and always remember to separate it from the metal stakes.

Styrofoam is recyclable, but only at specific facilities. Mitchell suggests using RecycleSearch, an online tool, to find locations near you. 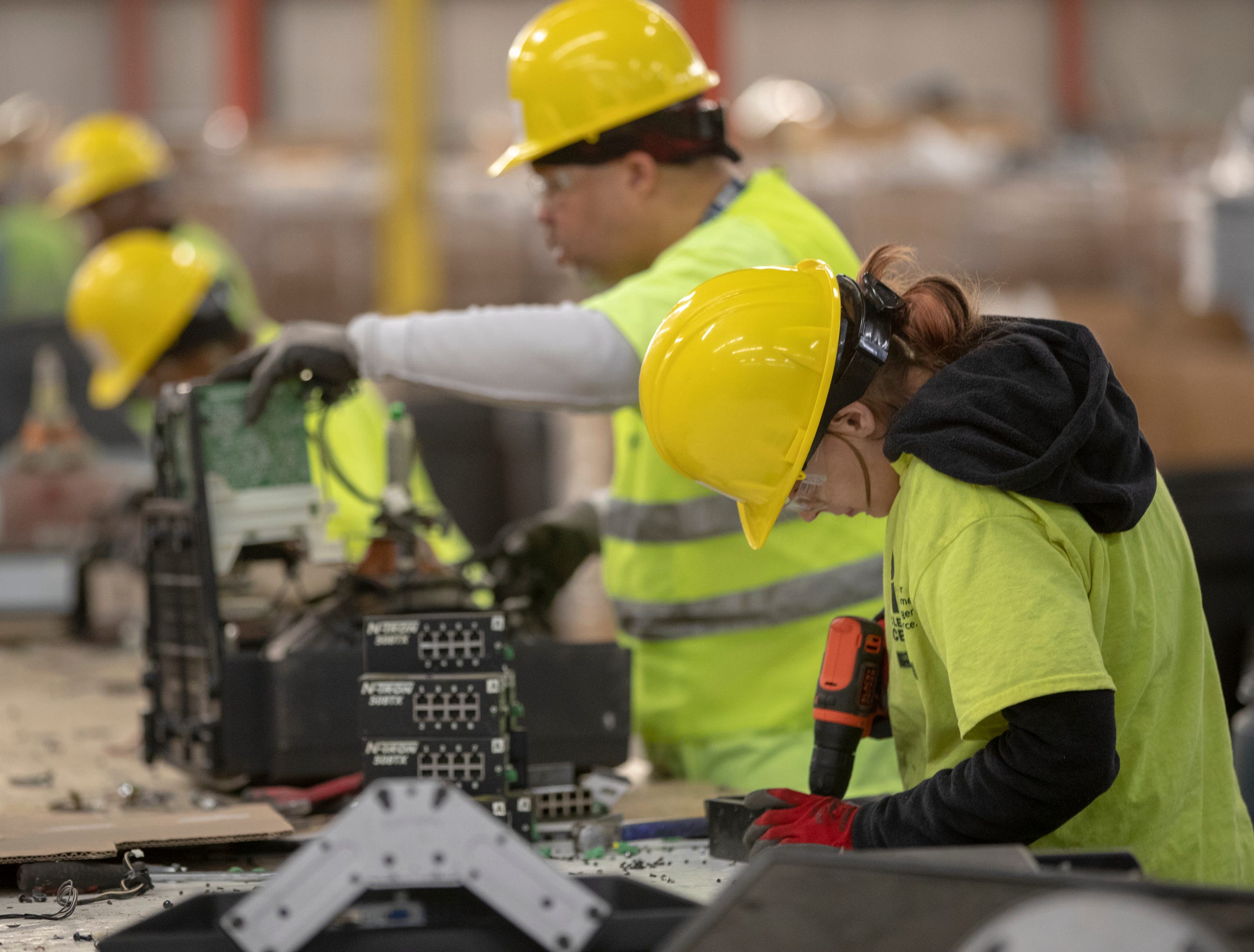 Egg cartons, whether made of plastic or fiber, are not recyclable, Mitchell said. The plastic kind aren’t in the 1 or 2 category, and the fiber ones are too low quality to recycle. She suggests giving them away to people who raise chickens for reuse, if possible.

Milk cartons are recyclable — as long as you take them to the right place. Ray’s accepts milk cartons, but Republic does not.

Scrub Hub: Where does my recycling go after it’s picked up from the curb?

K-cups and other single-use coffee pods are notoriously unrecyclable, and have even been banned in some cities. Even if the little, single-use pods were taken apart and the plastic rinsed out, they would still not be recyclable, Mitchell said.

Aluminum is recyclable, Mitchell said, but it’s important to make sure it’s heavy enough to go through the sorting process correctly. She recommends using multiple pieces of foil, pan or plate and rolling them all up into one ball. Foil can also be washed and reused, she points out.

Various metal scraps can be taken to a scrapyard or specific metal recycling facility, Mitchell said. You can find a full list of places around Indianapolis on RecycleSearch.com, but some locations in Indianapolis include Circle City Metal Recycling and Farnsworth Metal Recycling. 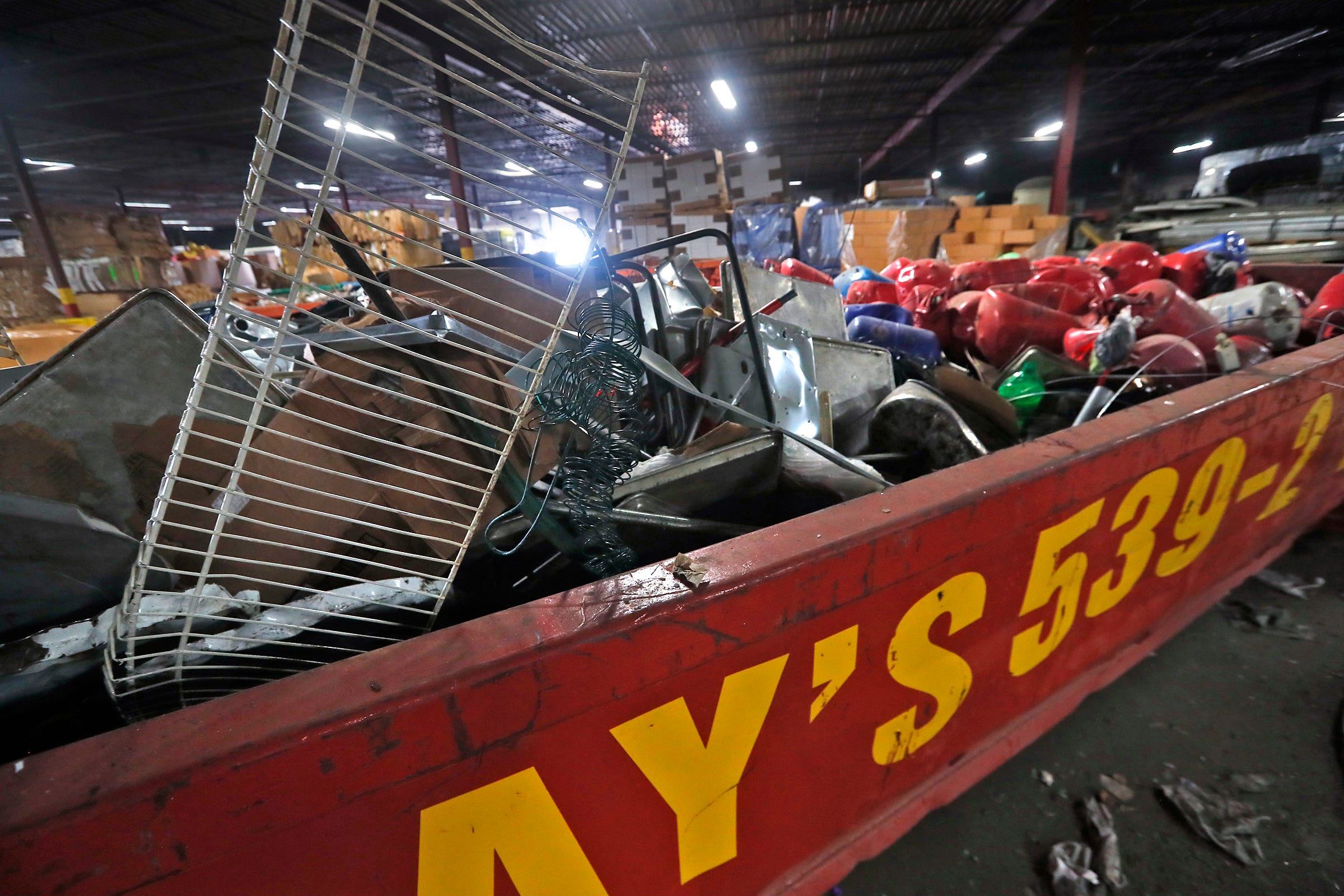 Your everyday AA or AAA battery can actually be thrown in your trash, Mitchell said, and some, like car batteries, can be taken to electronics or metal drop-off sites.

But never, under any circumstances, should they be thrown in the blue bin, she said. They’re extremely dangerous and one of the bigger safety threats facing facilities right now.

Although a block of paper might seem like something a recycling facility would want, books are actually too condensed to be recycled whole, Mitchell said.

If you have a couple of books you don’t think are appropriate for donating and are willing to spend a little time preparing, rip the binding off and separate the pages for recycling in the blue bin.

Fabric is another difficult item. It’s not recyclable in the bin, but if the item is lightly used and in good shape, it can be donated, Mitchell said. Other than that, old fabric can be repurposed for rags, insulation, or other reuse.

What do I do with non-recyclable items?

If you have an item that can’t be recycled, Mitchell said, and it’s still in good shape, donate it.

If it’s not in shape for donation, consider whether it can be repurposed for anything else. As a last resort, throw it away.

The Scrub Hub: Your questions. Our answers.

Do you have questions about the environment? IndyStar environmental reporters Sarah Bowman and London Gibson want to hear from you.

Overall, Mitchell points out, the spirit of recycling is about reducing waste and overall environmental impact. That said, you should consider cutting back on consumption overall — especially if you know the item won’t be recyclable down the line.

“Recycling in an important thing to do,” Mitchell said, “but it shouldn’t be the only thing you do.”

Connect with IndyStar’s environmental reporters: Join The Scrub on Facebook.

IndyStar’s environmental reporting project is made possible through the generous support of the nonprofit Nina Mason Pulliam Charitable Trust.