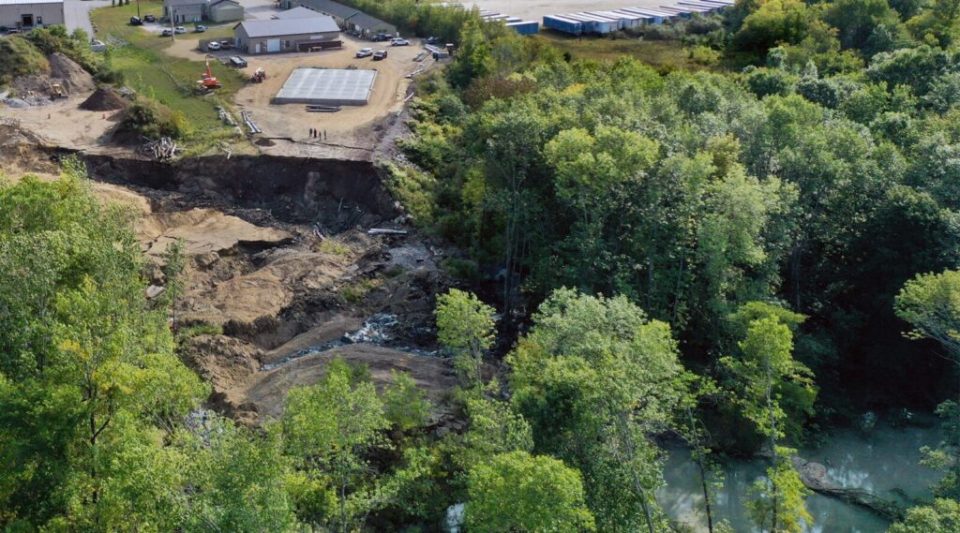 The Portland Water District is planning to remove debris from a landslide in the Presumpscot River that could damage water pipes or clog a wastewater outfall downstream.

The work most likely will begin Monday, according to the district’s director of asset management, Chris Crovo. It was not immediately clear what it will cost the water district and its ratepayers.

It would be the first effort to remove some of the soil, brush and other material that temporarily blocked the river when the riverbank gave way Sept. 16.

“We’re still assessing but the hope is to get in and move some of the trees,” Crovo said.

An area estimated at 300-feet by-300-feet – the equivalent of two football fields or two acres – collapsed and slid into the river in Westbrook, taking with it trees and soil. The landslide, which happened directly behind Les Wilson & Sons excavators at 161 Warren Ave., also took a large area of soil, a pile of fill, and a salt shed, in addition to damaging construction equipment.

The landslide blocked the river temporarily, and the water level behind the blockage quickly rose to 13 feet. The river level has since dropped as water found its way around and through the landslide debris. The area remains potentially unstable, according to city officials who have asked people to continue to stay away from the area.

A soft blue clay oozes from the ground at the site of a landslide in Westbrook on Sept. 16. The clay, known as the Presumpscot Formation, is believed to have made the riverbank unstable and is now mixing into the river along with other sediments. Derek Davis/Staff Photographer

The sediment and the soft blue clay that contributed to the landslide have turned the river a cloudy gray color well downstream.

The Portland Water District has been concerned about damage to two 42-inch water mains that cross the riverbed, as well as the potential for the sediment to clog an outfall pipe from its regional sewage treatment plant in Westbrook. Both the mains and the outfall are downstream from the landslide.

Crovo said there is some concern that rain forecasted for next week could complicate things. It wouldn’t take much, he said, for the river to rise further and take the debris with it.

“We’ll leave it to the contractor when they’re down there, but if it’s not safe, we’ll pull back,” he said. The work will be done by Shaw Brothers, a local construction company

It’s not clear what, if any, broader effort will be made to remove the materials from the river and stabilize the riverbank, or who would pay for it.

In the days after the landslide, a team from the Army Corps of Engineers came to Westbrook to assess the site. Westbrook Mayor Michael Foley said that because the landslide was a naturally occurring incident, it is best to let nature take its course.

“They have advised long-term solutions for the river could be pursued, though they do not currently recommend any immediate action,” Westbrook Mayor Michael Foley said this week. He said nothing had changed as of Friday. “Nature is taking its course,”  Foley said.

The Army Corps of Engineers did not respond Friday to a request for more information about recommendations or long-term solutions. The Maine Emergency Management Agency could not be reached.

City officials continue to monitor the area and the Maine Department of Environmental Protection is researching environmental impacts, including water quality and aquatic habitats.

The landslide is believed to have been caused by the Presumpscot Formation, a layer of soft clay that lies beneath the area and extends deep underground. The softness of the clay means that the material behaves like a viscous fluid that can “flow” rather than break into discrete pieces.

Lindsay Spigel, a senior geologist with the Maine Geological Survey, can’t say for sure what triggered it, but said it could have been the weight of the fill on top of that clay layer, the shaking of heavy equipment or a fluke. Landslide are more likely to happen during spring when the ground is wet.

Created by sea mud deposited in the late-glacial period, the Presumpscot Formation features a layer of “glaciomarine” mud that weathered into a hard, tan-colored clay as it was exposed to the atmosphere when the land gradually rebounded after the heavy glaciers retreated. The blue-gray layers of clay underneath the weathered layer, however, remains soft or “gooey.” And it’s that layer that can suddenly move after an extended period of very wet weather or an earthquake.

The river water downstream is now silty from the water eroding through the landslide material in the channel.

The landslide happened across the river from the site of the state’s largest landslide, which occurred in 1868, when about 20 acres shifted, eventually covering about 38 acres with displaced soil, according to materials published by the Maine Geological Survey. Men eventually re-dug a channel for the river to flow through the mud, thereby sparing the Cumberland Mill – now Sappi North America – from more serious damage.

The costliest and perhaps best-known recent landslide in Maine happened on April 16, 1996, when a roughly 50-foot bluff along Samoset Road suddenly slumped into Rockland Harbor. The terrain moved over 400 feet, disturbed 3.5 acres of land and destroyed two homes. Initial damages were estimated at $710,000, according to the Maine Geological Survey.

The site is still visible today as a steeply sloping, grassy field leading to the mudflats along a road that is otherwise dotted with modest waterfront homes.

The Bond is More Than a Name for a Multifamily Building