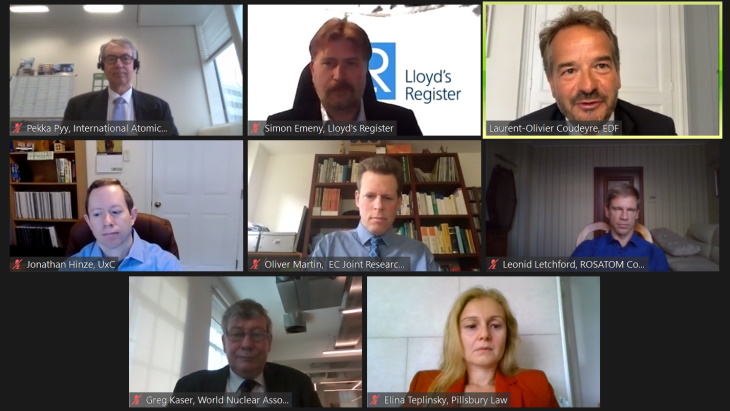 The commercial deployment of small modular reactors (SMRs) will bring new supply chain opportunities as well as challenges, panellists at an event to launch a World Nuclear Association report said this week. The World Nuclear Supply Chain: Outlook 2040 analyses the economic value of the nuclear power industry and provides a market-oriented review of the opportunities and challenges for nuclear power plants and their supply chain over the next two decades.

There is “significant potential” for both light-water and next-generation SMRs over the coming decade, Elina Teplinsky, partner at Pillsbury Winthrop Shaw Pittman, said. Rosatom’s floating nuclear power plant Akademik Lomonosov  – which was commissioned earlier this year – and the recent US design certification approval for the NuScale SMR illustrate recent progress towards the deployment of light-water SMRs, but non-light water models are also catching up, she said, and a “whole fleet” of SMRs could potentially become a reality in the next decade.

This presents significant possibilities for nuclear new-build in markets that are different from the traditional ones, Teplinsky said. “SMRs can address a whole new set of markets, both geographically because they can be used and deployed in countries that have smaller grids or require distributed energy, or don’t have the financial capacity to support a large nuclear power plant,” she said. In addition, these designs open up a new market non-electricity generation uses such as desalination, process heat, district heat and, in the longer term, the production of alternative fuels like hydrogen, she said.

The impact that will have on the supply chain will be “interesting”, she said. “By their nature, SMRs are more modular, and they’re going to have more manufactured content and potentially less civil construction [than large-scale nuclear power plants] – here, we’re moving more towards a product rather than a project.” This will lead to an expansion in the supply chain as new companies join it, she said.

Leonid Letchford, head of quality management at Rosatom, agreed with Teplinsky that the introduction of SMRs will see the supply chain evolve. As well as the requirement of SMRs for “more equipment and less construction,” he said, another driving factor would be the amount of communication and information technologies and tools that will be required. Development times are likely to shorten, he said, and the number of suppliers will increase as companies that are developing advanced manufacturing technologies and tools join the supply chain. The increasing use of “non-conventional” manufacturing technologies will bring new suppliers to the market, but will also bring new challenges related to quality assurance and licensing of technologies and products used in SMRs, he said.

The World Nuclear Supply Chain: Outlook 2040 notes that the number of suppliers maintaining a nuclear quality assurance accreditation is declining, with the number of companies worldwide holding an N-Type Certificate or Quality System Certificate from ASME falling from 395 in 2013 to 270 in 2019. Oliver Martin, project leader at the European Commission Joint Research Centre (Petten), said this decrease is the greatest challenge facing the supply chain today. Suppliers must have a nuclear quality assurance programme in order to produce safety-related structures, systems and components for facilities, and to obtain and maintain accreditation takes time and commitment. Suppliers will only make such efforts if they are sure of good market prospects and a continuing stream of orders in the years to come, he said.

Countries such as China, Russia or India, which have multiple new-build projects as well as operating reactors, and France, with large fleets of standardised reactors, present an attractive market which means suppliers are more likely to maintain their nuclear quality assurance programmes. But where this market prospect is missing – for example in countries which are operating small nuclear fleets – it is “increasingly challenging” for utilities to find suppliers that are willing to keep their nuclear quality assurance programme, making the supply chains of those countries more vulnerable, he said.


One solution to this, Martin said, is to make more use of commercial-grade accreditation as outlined in the World Nuclear Association report. Commercial-grade components and systems are produced to non-nuclear industry codes and standards but are nevertheless of the requisite quality. It is also important for uniform quality standards to be used throughout the supply chain, and it is key for all suppliers to use the ISO 9443 quality management system standard, he said, calling on designers and developers of SMRs not to “invent new nuclear design codes and standards just for SMR but use what is already there.” Water-cooled SMRs could use existing ASME, RCCM and other design codes. Looking further ahead to non-water cooled reactor designs, countries and reactor vendors should work together to develop the necessary nuclear design codes, he said.

UxC Consulting President Jonathan Hinze said he agreed with Martin. “Challenges to the supply chain are myriad – we have had some reduction overall in the market over last decade, and shifting of the market to regions that are managing their own supply chains much more aggressively,” he said. The international market would transition as new suppliers from markets such as China, India and South Korea join it. “We’re starting to see exports out of China and Korea – Japan too – but now we also unfortunately have a number of trade issues,” he said, citing relationships between China and the USA and China and the EU. “The industry as a whole is going to have to work harder to integrate globally.”

Large nuclear power plants and SMR plants may face some different challenges, but both types of plant require a supply chain for their construction, and a supply chain for their operation, Simon Emeny, director of Low Carbon Assurance Services at Lloyd’s Register, said. While it would make good sense to manufacture certain components in a single location, he said, this could also bring challenges for transport, the impact on carbon footprint, and financing.

“There needs to be a balance,” he said. If localisation can be done in a structured way, with neighbouring countries keeping supply chains as short as possible, taking advantage of the standardisation of codes and using as many non-specialist pieces of equipment as possible, then the focus moves to the security of the supply chain and confidence in quality. The next step, he said, would be to ensure cooperation between different localised programmes.