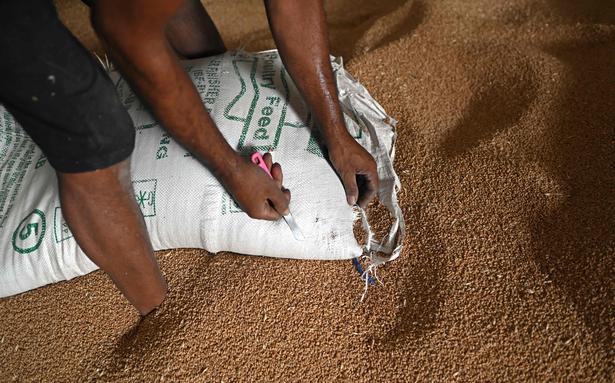 While Punjab was the main contributor to wheat buffer stocks this year, procurement by the Food Corporation of India (FCI) was less than 10,000 tonnes in as many as nine states.

FCI’s wheat procurement during the current rabi marketing season (RMS) is 187.94 lakh tonnes (lt) against 433.44 last year. The main reason for this was the significant fall in the procurement from Madhya Pradesh, Uttar Pradesh and Haryana.

Though maximum quantity of wheat was procured from Punjab, it was well below the procurement figures of previous season. Wheat buying from Punjab was 96.47 lt against 132.22 lt a year ago, recording a decline of 37.06 per cent.

In a written reply on the shortage of wheat stock in Rajya Sabha on Friday, Sadhvi Niranjan Jyoti, Union Minister of State for Consumer Affairs, Food and Public Distribution, provided state-wise break up of FCI wheat procurement.

The Minister said the wheat stock available in the Central pool was at 285.10 lt as of July 1 against the buffer norms of 275.80 lt.

Wheat stocks as on April 1, 2023, is projected to be 134 lt against the norm of 74.6 lt even after meeting the requirement of PMGKAY (PM Garib Kalyan Ann Yojana) up to September and public distribution system, she said. Wheat stock in the Central pool was at 189.9 lt as of April 1.

To another query on the impact of Russia-Ukraine war on price of wheat, the Minister said the prices of wheat had increased due to the war as both Russia and Ukraine are major exporters of wheat worldwide. With the war situation and less availability of wheat in the world market, wheat demand increased substantially, leading to increase in its price, she said.

Asked if FCI has sufficient exportable surplus of wheat to offset the increase in energy imports due to the war, the Minister said commercial export of foodgrains from Central pool is prohibited as per the WTO norms.

In a separate question in the Rajya Sabha, Narendra Singh Tomar, Union Minister for Agriculture and Farmers’ Welfare, said the production of wheat, which was estimated at 111.04 million tones (mt) during 2021-22 in the second advance estimates, has been revised to 106.41 mt in third advance estimates.