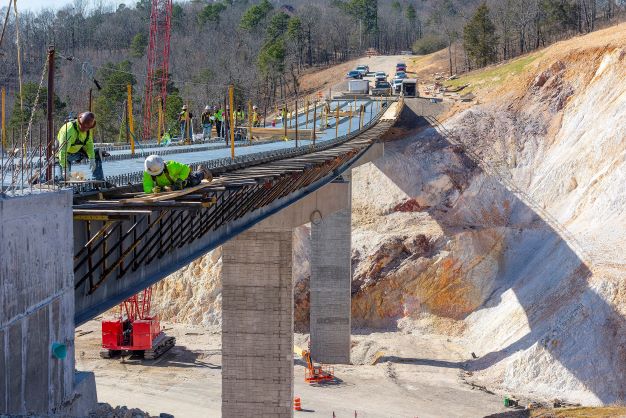 A surprise came today with the announcement that supply chain issues may delay opening of the new Hot Springs Bypass Scenic Highway.

Two weeks earlier, he wrote that the highway was on track to opening in early fall.

McGrew said the area ARDOT director told him delivery of parts needed for the Mill Creek overpass had been delayed.

“He told me that in his opinion, due to supply-chain problems, the bypass probably would not be open until late winter, in January or February,” McGrew told the GAC. “It’s the bulkhead that holds the bridge up and there’s other material, it’s not just dirt, that has been delayed.”

The new highway will have two 12-foot-wide travel lanes, one in each direction with no median, with an 8-foot-wide shoulder. Looking to the future, ARDOT holds sufficient right of way to allow  widening to four lanes.

The Hot Springs Bypass Scenic Highway will connect the eastern terminus of the Martin Luther King Expressway, east of Hot Springs, with Fountain Lake. Upon opening, it will be designated as Highway 5.

Wheat procurement by FCI less than 10,000 tonnes in nine States

Commercial EVs are a game-changer for the supply chain