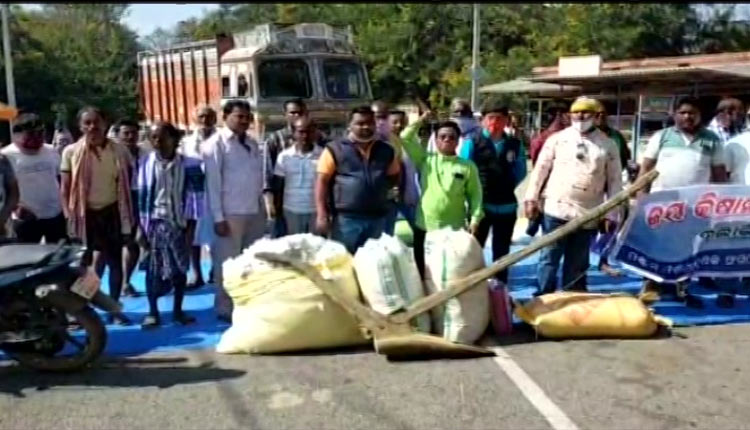 They demanded reforms in token system introduced in the procurement of paddy and protested cap on paddy procurement from irrigated and non-irrigated land.

Hundreds of farmers assembled at Sindurpank of Sambalpur and launched a demonstrated demanding the government to execute paddy procurement process at the district-level against the present format of state-level procurement. They also obstructed the national highway by keeping paddy-laden trucks and tractors.

Similar protests were also launched in Bargarh and Patnagarh of Bolangir district. Farmers under the aegis of Western Odisha Farmers Organisations Coordination Committee staged protest by keeping paddy and other agricultural equipment on the road at Atabira.

Protesting decentralisation in paddy procurement a farmer said, “We oppose the token system of the government. Farmers cannot sell their product in this way. When farmers are ready to sell their produce, there is the unavailability of tokens and when tokens are available, paddy is not available. This apart we also demand the abolition of new farm laws implemented by the Centre.”

“We demand that the Centre must revoke the three ‘black laws’ passed against the farmers. We are also unable to sell our paddy in the market wards due to the policies made by the Odisha government. We will not withdraw from the national highway until our demands are fulfilled,” said another farmer.

Reacting to the unrest, Civil Supplies and Consumer Welfare minister Ranendra Pratap Swain said, “Some people with vested interest are protesting in the guise of farmers.”

“If any registered farmer has not received the token yet that is because verification of their plot, bank account, aadhaar and irrigated land is underway. Efforts are on to issue tokens to farmers at the earliest,” the minister said.

“District collectors have been asked to verify farmers having more than 10 acres of land. After the collectors submit the reports, token will be issued within 24 hours,” he added.

Swain said that 56 per cent surplus paddy has been procured this year. Till date, 4,68110 metric tonnes of paddy have been procured from 71744 farmers in the State and Rs 570 crore provided to them.

While paddy procurement has already started in 16 districts, the process will begin in remaining districts after decision by the district-level committees, he added.

How WHO is Fighting Unequal Distribution of COVID-19 Vaccines

The Best Artificial Intelligence Stocks to Buy in 2021