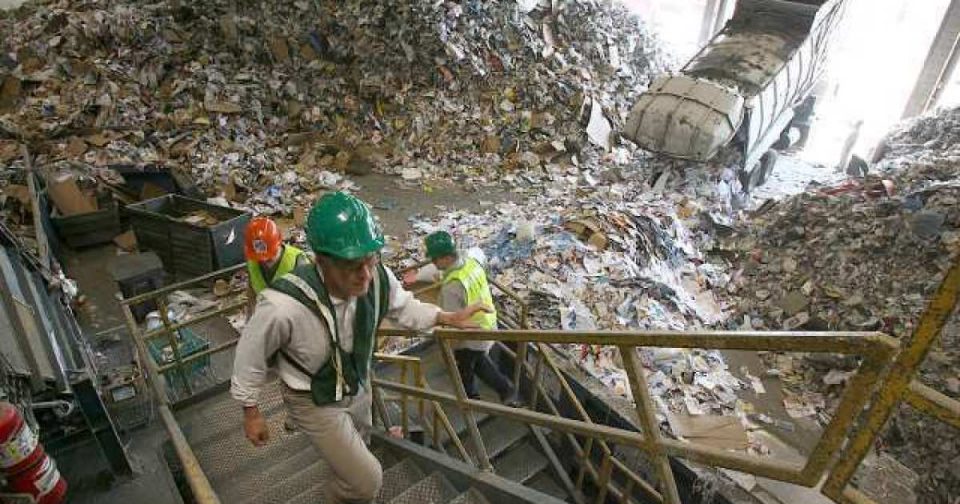 Even before coronavirus arrived on U.S. shores, California waste recyclers were reeling from the collapse of global markets for used plastics and other scrap materials — a predicament that diverted the contents of many blue recycling bins to local landfills.

But now, as COVID-19 continues to wreak havoc on all aspects of the economy, the situation has become even more dire for the struggling California waste recycling industry.

Even as hospitals and health officials struggle to cope with a new surge in infections, the pandemic has already significantly altered the waste stream, reducing the profits of many recyclers. Outbreaks and financial concerns have forced the closure of many redemption centers, while those that remain open have been flooded with customers. And, in a development that recycling advocates find particularly distressing, manufacturers are increasingly turning to cheaper, non-recycled plastics.

“This is the horror story that’s coming at us,” said Kreigh Hampel, recycling coordinator at Burbank Recycling Center. “Plastic is going to increase and with COVID. It was the perfect storm.”

In the face of this new crisis, recyclers are having to adjust to the paradox of pandemic life. While the increased use of packaging for disposable personal protective equipment, takeout food and medical gear would lead many to believe more recyclables have entered the waste stream, business closures and at-home living have led to Californians producing less waste overall.

L.A. Sanitation, which oversees the city’s recycling program, has seen residential waste increase between 15% and 20% and commercial waste decrease approximately 15%, according to director Enrique Zaldivar. Along with that shift come some significant economic impacts.

“For any business, one less customer is always a negative impact,” Zaldivar said. In Los Angeles, “there’s somewhere in the order of 5,000 businesses that no longer have trash service or have discontinued temporarily, hopefully not permanently.”

In contrast, residential waste operates with a fixed rate, so even when haulers are picking up more stuff, they’re not making more money. However, it’s likely that these rates could increase for customers in the future.

“We’re telling them: You have a blue bin. All you have to do is throw this stuff in the blue bin and you’ve done your part,” said Assembly member Laura Friedman at a state Assembly hearing last month. “So this is the fiction that’s been created by the industry and by us. And the result is mountains of plastic filling up our landfills.”

Even when something is signed off as “recycled,” it might not be in the way we expect. When material is exported from California, it is counted as “recycled,” even though there is “no way of tracking when we export those materials if they’re actually getting recycled in those countries,” said Zoe Heller, deputy director of policy development for CalRecycle at a state Assembly hearing last month. Historically, exported materials account for about one-third of California recyclables.

That number has been decreasing since 2017, when China dramatically narrowed its global market for imports of certain scrap materials and plastics.

Environmentally, the decrease in exports is “a good thing,” according to Heller. It creates more accountability for the endpoint of American-generated waste.

But economically, the loss of China and countries in Southeast Asia as avenues for exportation presents large challenges, especially for mixed paper and mixed plastic, two materials that don’t have strong domestic markets.

The Basel Convention, a 1989 global treaty aimed at regulating the disposal and exportation of waste, will add mixed plastic into its reach of regulated material at the start of 2021. This will further limit U.S. ability to export mixed plastic, especially since it is one of the few countries to not have ratified the treaty.

In the meantime, recycling facilities across the state are working to manage those materials. Large waste management companies are not in danger of shuttering; those most at risk economically are small facilities.

Burbank Recycling Center closed to the public in late March out of concern for the safety of its staff. As more information about the virus became known, they tried to reopen the facility at the end of June.

“I was really nervous,” said Hampel. “I made a lot of ‘closed’ signs, because I just didn’t think this thing was going to go right.”

On a Tuesday, they opened with new COVID-19 safety protocols in place. That Saturday, they received notice that one staff member was showing symptoms. Within a week, 17 staff members contracted the virus and 27 additional staff members had to quarantine due to possible exposure.

Since then, they’ve remained closed.

During the pandemic, only five out of 17 facilities that accept recyclables in Los Angeles have been fully operating, according to L.A. Sanitation assistant director Alex Helou.

Before it was clear that surfaces were less likely to carry the virus, thousands of tons of recyclables were put into landfills out of fear that they might be infectious and expose staff.

In June, Gov. Gavin Newsom put out an executive order that temporarily lifted the statewide ban on single-use plastic bags. It also allowed for recycling centers to be open for fewer than the previously mandated number of hours, and to close in-store redemption of beverage containers, to protect staff members.

Still, many facilities have struggled to stop the spread of infection among workers. Waste management is an essential service, and for facilities with public-facing centers still open, staff interact daily with hundreds of people.

L.A. Sanitation has had over 100 positive cases among its staff.

In Northern California, a bottleneck has formed from the high number of closed facilities, placing a strain on those that remain open.

Union City’s Tri-CED Recycling, the largest non-profit recycling center in California, has managed to stay open, but has had to adapt to accommodate more than double the amount of customers. Before the pandemic, they averaged between 150 and 185 customers per day. Now they average between 350 and 385.

Lines are long — cars snake around the block as customers wait between 45 and 75 minutes to redeem recycling.

The center buys and provides masks to all customers, and has even begun operating two portable toilets for those waiting in line.

Richard Valle, president of Tri-CED Recycling, says the other facilities near him officially shut their doors due to coronavirus, but they are staying closed because it’s “just not profitable to run redemption centers” with the current reality of recycling economics.

All these factors have also contributed to another economic concern: the decreasing costs of virgin (or newly created) PET plastic. PET plastic is what’s in stuff like disposable water bottles, food packaging and shampoo bottles.

It’s currently cheaper for manufacturers to use virgin PET plastic instead of recycled material. The gap between the two has grown significantly throughout the pandemic.

Recycled plastic is getting costlier to make, due to social distancing slowing facility productivity, the closure of international markets and higher contamination rates.

Virgin PET plastic is made, in part, from oil and most frequently in North America, natural gas. This April, oil dropped to a record $0 trading price — a collapse reflecting the oversupplied U.S. oil market, which has been exasperated by the pandemic and made virgin plastic even cheaper.

Before the pandemic, PET plastic costs were already dropping, with a record-low scrap price of $130 per ton last October. This August, it was $56 per ton.

“We thought like, ‘Oh, my God, this is the basement, it’s never been this low,’ and now it’s half that amount,” said Murray. “It’s a financial shock to the system.”

Moving forward, Californians can expect their recycling program to continue, perhaps at a greater personal cost.

To find more solid footing, the industry is looking toward government mandates like AB 793 and increased public education and support. Many industry leaders urge the U.S. to join the Basel Convention in hopes that it will increase international trade possibilities in the future.

And in the meantime, they’re gearing up for the next round of business closures. The pandemic continues to spike more than ever, with California’s number of daily cases tripling in the month of November.

For now, they’ll take it one day at a time.

“It’s the spirit of us Angelenos. And us Californians. We know that there will be a better day. It’s just that we hope it won’t take too much longer,” said Zaldivar.