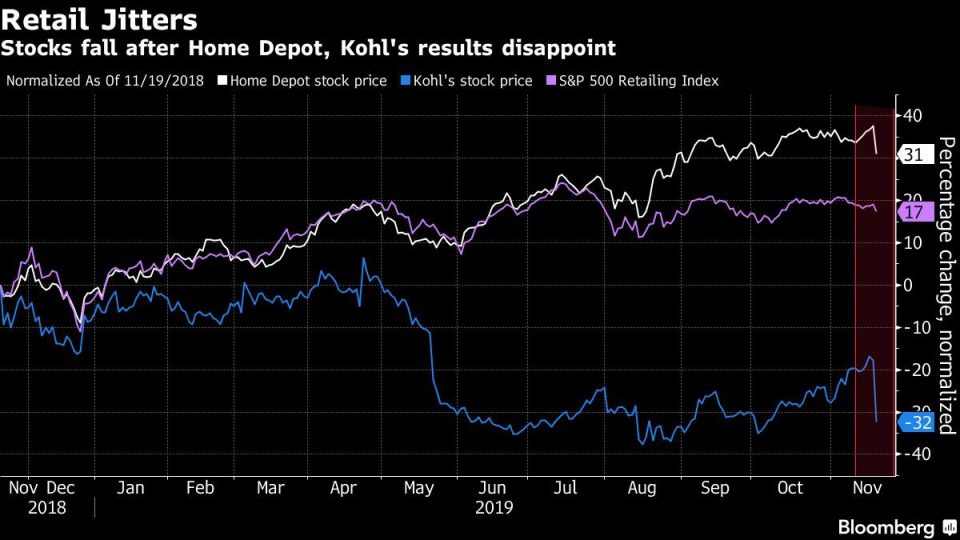 (Bloomberg) — Home Depot Inc. and Kohl’s Corp. both posted disappointing results on Tuesday, raising fresh doubts about the health of the American consumer heading into the crucial holiday season.

The two retailers cut their annual forecasts for the second time this year. While the companies blamed shortfalls on specific issues — lumber prices at Home Depot and lower demand for women’s apparel at Kohl’s — the weak results sent jitters across an industry that has been scrutinized for any sign of weakness amid a record streak of economic growth.

The concerns were reflected in a broad decline in consumer stocks, with the S&P 500 Retailing Index down as much 1.5%. Home Depot’s stock dropped as much as 5.6%, the biggest decline since February 2018. Rival Lowe’s Cos., which reports earnings Wednesday morning, fell 1.8%. And an S&P 500 department stores index plunged by the most intraday since the start of 2017 following Kohl’s results.

Kohl’s, whose stock plunged as much as 18%, is particularly worrisome ahead of the gift-giving season. The company has made investments that it said would draw in more customers — specifically millennials..

“Top-line sales weakness raises concern for the retailers to deliver in the all-important holiday quarter,” Bloomberg Intelligence’s Poonam Goyal said in an email. A deep cut to Kohl’s profit forecast calls into question “the effectiveness of management’s initiatives and suggests more may still be needed.”

TJX Cos. was a bright spot Tuesday. The operator of the TJ Maxx and Marshalls chains reported comparable sales — a key metric — that outpaced the average estimate compiled by Consensus Metrix, sending shares higher. The outlook for retailers will come into sharper focus as more companies report quarterly earnings this week, including Target Corp. and L Brands Inc., the owner of Victoria’s Secret, on Wednesday. Macy’s Inc., Gap Inc., Ross Stores Inc. and Nordstrom Inc. will release earnings on Thursday.

Neil Saunders, an analyst at GlobalData Retail, said Kohl’s results weren’t all negative, since the company managed positive comparable sales. But apparel weakness and aggressive discounting across the industry illustrate “a challenging backdrop.”

“Kohl’s felt the cold wind of this and struggled to generate growth,” Saunders said in an email.

Consumer spending has been fueling U.S. economic growth at a time when the global economy weakened, prompting concerns over when the record expansion will inevitably come to an end. Evidence that American households are starting to feel stretched is showing up in debt data, as serious delinquencies on credit cards and auto debt have crept up.

Over at Home Depot, some online investments didn’t pan out as early as expected, and the benefits will take longer to materialize. The weak performance was all the more surprising since the Atlanta-based company had told investors that the second half of the year would be better. Same-store sales have now trailed projections for three straight quarters, a concerning trend for a retailer that’s been a consistent top performer this decade, according to Brian Yarbrough, an analyst for Edward Jones.

“Housing is good, but not great like it was,” said Yarbrough, who downgraded Home Depot’s stock to hold last week. “It’s going to be harder for Home Depot to show those outsized gains.”

The company now sees same-store sales growth of 3.5% for the full year, down from 4% previously.

CSX gets on board with TradeLens, with a focus on supply chain visibility

Rs 70L for parking lot in Mandi : The Tribune India