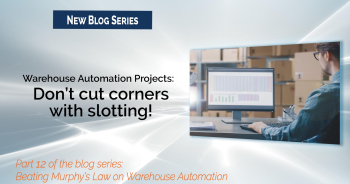 Most companies that have attempted to implement automated materials handling equipment have discovered that these projects can be particularly vulnerable to Murphy’s Law, the principal that, “anything that can go wrong, will go wrong.” This blog is twelfth in an ongoing series on “Beating Murphy’s Law in Warehouse Automation Projects.”

A key design area that can cause problems with material handling system implementations is that of bin slotting: determining the optimal location for each SKU in the system. There are two basic approaches which can be taken to bin slotting: (a) using spreadsheet-based tools, and (b) using commercially developed, specialized slotting software. Each approach can be effective in certain situations.

Spreadsheet tools can often be used to perform very accurate bin sizing. This step is crucial as the final storage mediums are designed, and shelf spacing is set during implementation. Improper bin sizing can result in bins which are too large (creating wasted space and excessive travel), or too small (creating product overflows and excessive replenishment labor). Incorrect bin sizing is usually caused by either (a) faulty master data, or (b) shortcomings in the calculation methodology. Errors in master data can often be caught by having individuals who are knowledgeable of the business review the data, investigate outlying data points with a critical eye, and look for results which do not intuitively seem right. Conversely, errors in calculation methodology can often be remedied by having individuals experienced in slotting processes create the slotting tool using proven methods.

While commercial slotting tools are not inexpensive, they can often prove to be a wise investment. In the chaos of a system implementation, it can be difficult to rapidly correct slotting mistakes on the fly; far better to avoid making them to begin with by investing in a rigorous slotting program from day one.
To read Commonwealth’s complete white-paper titled, Beating Murphy’s Law in Warehouse Automation Projects, click here.