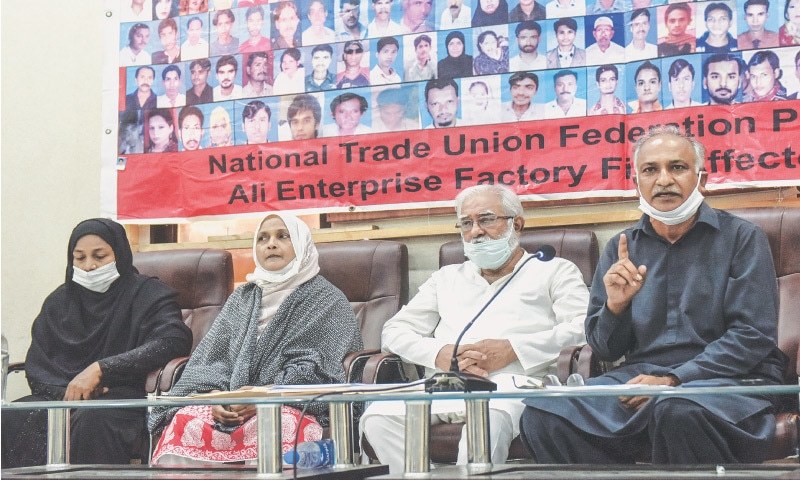 KARACHI: It was painful to watch the affectees of the Baldia factory fire, holding pictures of their lost loved ones, as they arrived to attend and also express their views during a press conference at the Karachi Press Club on Saturday regarding the “politicising” of the case, which, they said, has saved the owners of the factory from being held responsible for criminal negligence.

On Sept 22, an antiterrorism court in Karachi sentenced two ex-Muttahida Qaumi Movement workers to death in the Baldia factory arson case while the factory’s four gatekeepers were sentenced to life term. Meanwhile, the factory owners were spared from punishment.

It’s been eight years since the terrible tragedy but there was still a glint of tears in their eyes as they shared their suffering of having to lead life without their earning family members, who lost their lives in the inferno on Sept 11, 2012.

Holding tightly to his walking stick to help him sit straight, Aziz Bhai, who lost his son in the fire, said that the court had said that the incident happened as a result of terrorism but he did not accept the decision.

The widowed Saeeda Khatoon, who also lost her only son in the tragedy, said that more than 260 workers, who lost their lives that day, could have been saved had there been any safety measures in place at Ali Enterprises.

‘Factory had no escape routes’

“The factory had no escape routes, and extra or back exits if there were any, were all blocked or locked. Still, if it is being said now that the tragedy was a result of terrorism, then the factory owners are the greatest terrorists here,” she said.

“We need laws to make sure that no other factory becomes like Ali Enterprises. The factory was not registered. Its workers were not registered. For a while, from 2012 to 2017 we got some pension as per some pension plan but then it stopped. Isn’t pension to be paid for life? We have lost our only earning family member. We demand our pensions be restored,” she added.

The affectees were joined by labour and human rights activists, who were also of the opinion that in the case of the Baldia factory incident, the real perpetrators have been allowed to go unscathed while the case has been politicised.

“The bereaved families of martyred workers did not get justice this time. Declaring the main accu­sed owners of the factory ‘innocent’ is like making mockery of the justice system. Due to lack of health and safety facilities, workplaces in Pakistan have become death traps for Pakistani workers. Investigation in the Baldia factory fire case was influenced by making different joint investigation teams [JITs]. The bereaved families were never accepted as a party in the case, which is against the basic principles of law and justice,” said Nasir Mans­oor, general secretary, Natio­nal Trade Union Federation (NTUF).

He explained that the main issue here was not whether it was an arson or accidental fire, but that the factory was not fitted with a proper firefighting system. All exits of the factory including its windows had iron bars. The firefighting equipment present there was not in working condition. The workers were not provided any training or drills to help them face emergencies. Even the factory was working illegally. Its construction design was not approved from the departments concerned, and these were the main reasons that resulted in the death of over 260 innocent workers.

“If the factory owners were being blackmailed or if they were receiving threats from extortionists, then they should have contacted the police while also taking safety measures in their factory which they did not do. The government is still a silent spectator to what happened and local and international brands are violating labour laws and standards in a race to earn more profits,” he said.

“Everybody is doing politics on the blood of the poor workers but no one is willing to help them in getting justice that can dress their wounds. It is a shame that Karachi, the largest industrial city of Pakistan, does not have any forensic laboratory even in the 21st century for doing DNA tests. Some 17 dead workers of the Baldia fire incident had to be buried without identification as their families are still waiting for the DNA matching certificate from the laboratory in Lahore,” he said.

Karamat Ali of Pakistan Institute of Labour Education and Research (PILER) said that the factory fire happened in 2012 and they filed cases for criminal negligence against the factory owners. But sometime in 2015, the negligence issue was forgotten while terrorism took the main focus.

“There is no implementation of ILO conventions according to which annual inspection of factories is mandatory. International brands, their local suppliers and private social audit companies have made a wrongful alliance against the workers here and, sadly, the government is patronising them. This is tantamount to giving them a licence to kill workers,” he pointed out.

“There is a supposed law of occupational health and safety in Sindh but it is not being implemented. The Sindh government declared the day of Sept 11 as the day of health and safety but strangely no programme or event was held on governmental level on this day. It is almost every week these days that we see an unfortunate factory or mines incident but just like rape cases, injustices against workers are not reported,” he said.

Zehra Akbar Khan, general secretary, Home-Based Women Workers Federation, raised the question that if the factory owners were receiving threats from extortionists then how come they decreased the number of guards at the factory around that time?

Asad Iqbal Butt of the Human Rights Commission of Pakistan said: “We refuse to accept the politicised court order. This is a failed state if you can’t protect your people, your workers.”

Trans-Hit Biomarkers Announces Today a Partnership With Nexelis, Supporting Sample Procurement Activities for a Number of Strategic Projects Including COVID-19...

OEM and industry partners hit the road to collect material