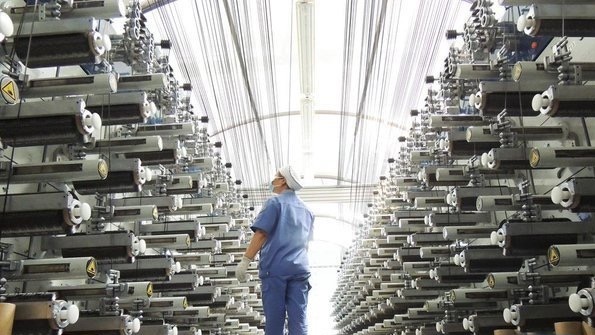 Activity in China’s factory sector increased in December, a business survey showed on Monday, however, increasing cost pressures slowed the pace of expansion.

The Caixin/Markit Manufacturing Purchasing Managers’ Index (PMI) fell to 53.0 from November’s 54.9, with the gauge staying well above the 50-level that separates growth from contraction but missing expectations and easing to the softest pace in three months.

Analysts polled by Reuters had forecast the headline reading would slip to 54.8.

“The negative impact of the [coronavirus] pandemic on the domestic economy

The private sector survey also showed input prices climbed sharply, at the fastest pace since 2017, with pricier raw materials, especially metals, blamed for the increase. Chinese factories also laid off more workers than they hired for the

first time in four months, although the decline was modest.

“We need to pay attention to the mounting pressure on costs brought by the increase in raw material prices and its adverse impact on employment, which is particularly important for the design of the exit from stimulus policies implemented during the epidemic,” said Wang.

“We expect the economic recovery in the post-epidemic era to continue for several months, and macroeconomic indicators will be stronger in the next six months, taking into account the low bases in the first half of 2020,” said Wang.

Samsung’s only China TV factory to halt production by November

Fury and cost of natural disasters

General Motors to deliver the goods with electrical vans startup

Why Supply Chain Attacks Are So Destructive