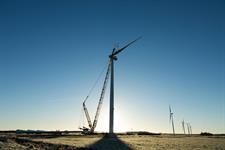 Vestas is to lay off about 200 employees from its blades factory in Colorado early next year, as it anticipates reduced volumes in the near-term.

This is more than a fifth of the workforce currently employed at its factory in Brighton, Colorado, according to Vestas’ website.

It has not confirmed what jobs will be included in the lay-offs, which are due to take effect in mid-January.

Vestas made the cuts as it expects US market volumes to fall following several years of peaking demand, a spokesman explained.

The manufacturer also stopped producing V136 blades at the Brighton blade factory in August, citing reduced demand for that variant.

The spokesman added: “Vestas will make every effort to support eligible colleagues in transitioning to other opportunities within Vestas, such as in Vestas’ Service organization that is hiring hundreds of new employees or the Vestas Construction and Tooling organization which will begin utilizing available space at the Brighton Blades factory.”

Vestas also has a nacelle factory in Brighton, Colorado, where it employs more than 400 people, according to its website.

As vaccine rollout looms, so do big questions around supply chains

Amazon.com, Inc. (NASDAQ:AMZN) – Atlanta Startup Builds An Amazon ‘For Everyone Else’