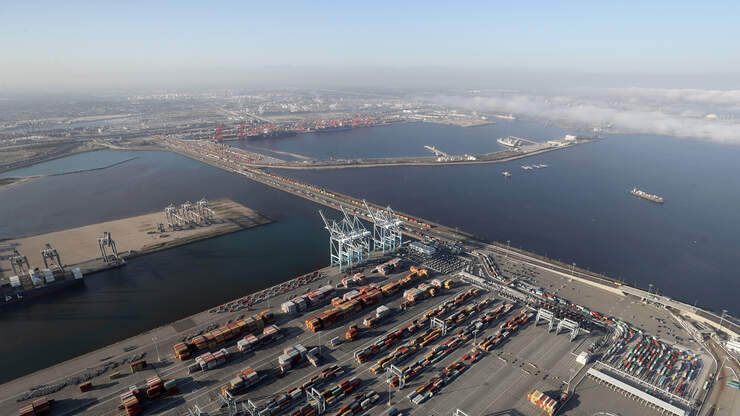 LOS ANGELES (CNS) – After a dismal start to the year due to the COVID-19 pandemic, the Port of Los Angeles reported today that it has more cargo than can be quickly moved.

Port of Los Angeles Executive Direct Gene Seroka said a surge of imports has strained trucking and rail lines, and it’s going to be important to use real-time data to keep the supply chain moving fluidly.

“This has dramatically slowed the ability to absorb cargo and return equipment … back to the system, with cargo coming into terminals much faster than it’s going out,” Seroka said. “Containers are accumulating in large numbers with fewer and fewer places to put them.”

Seroka praised the work of members of the International Longshore and Warehouse Union, which represents the port’s workers, for their efforts during the influx of cargo units.

“Despite their great effort, it’s simply impossible for all of us to keep pace with this volume of cargo,” Seroka said. “The spike in imports is unprecedented in scale, breaking new records on a monthly basis.”

Seroka said the surge is due to more COVID-19 restrictions being lifted in other countries, but mostly it’s because consumer buying patterns have changed. Americans aren’t staying in hotels nor spending money on services or travel, but they are buying a lot more goods in order to stay at home.

The port director said in order to alleviate the cargo surge, officials have started using a new software program, Return Signal, which will help the port’s optimization system and with real-time data that people can access at signal.portoptimizer.com.

In October, longshore workers moved more than 980,729 cargo units, which is a 27.3% increase from the same month last year and surpassed the previous monthly production record set in August.

Seroka called it a “dramatic turnaround” compared to the first six months of the year, when the port moved an average of just over 627,000 units.

The port is down 5.3% for all units moved compared to last year, but Seroka said this is a major improvement from May, when the port was down 19% year-over-year. Including numbers from the Port of Long Beach, the entire San Pedro Bay Port Complex is down about 2% for all shipping containers compared to last year.

Additionally, 145,000 labor shifts were lost this year at the Port of Los Angeles and “that will not be made up in 2020,” Seroka said, but the trend for work shifts in the last 16 weeks proved to be consistently “favorable.”

November cargo unit activity could reach 900,000, which would be a 23% increase from last November, but Seroka said it all depends on how well the supply chain moves.

The surge may slow just a bit in December but will likely pick up leading into the Lunar New Year holiday in February, he said.

Seroka said to speed up productivity, the port will provide incentives to terminals that get cargo units moved faster and will pay terminals for trucks that make sure they bring one cargo unit in and leave with another.

He said a third strategy is to develop a national trade and export standard that focuses on agriculture, automotive and manufacturing industries to increase the nation’s competitiveness in maritime trade.

Vestas to cut ‘about 200 jobs’ at Colorado blade factory