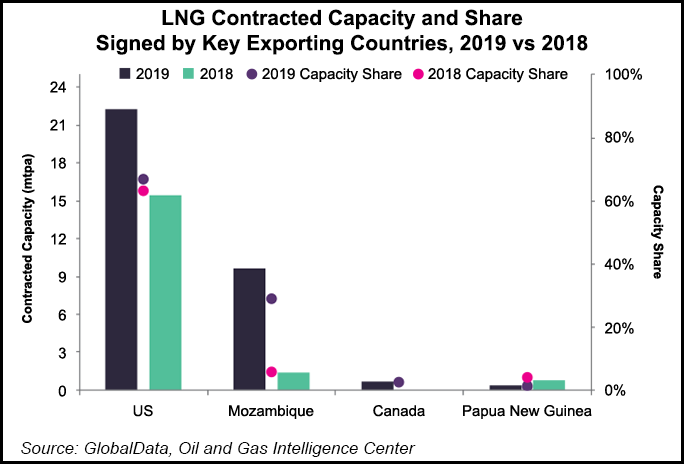 U.S. liquefied natural gas (LNG) projects have signed the highest volume of global long-term export contracts this year as the next wave of facilities locks in customers seeking supply security.

The finding comes as no surprise, said Patrick Rau, NGI’s director of strategy and research, “if for no other reason than the U.S. has the largest number of potential LNG export facilities on the drawing board right now.” He added that those projects, expected to come online in the coming years, “are still being underpinned by longer-term contractual obligations, since construction costs for the trains are astronomical.”

GlobalData said the contract with the highest export volumes inked by a U.S. project was signed between Golden Pass Products and Ocean LNG Ltd. for 15.6 mmty. Those volumes are to be supplied by Golden Pass LNG for 20 years between 2024 and 2044. That project, which is being developed by Qatar Petroleum and ExxonMobil Corp. would be built in Sabine Pass, TX, and is expected to start operations in 2024.

GlobalData analyst Sunrita Dutta noted that the other major long-term LNG contracts signed to export from the U.S. included one between Driftwood LNG and Total SA for 2.5 mmty from 2023-2038 and others signed by Magnolia LNG and RioGrande LNG for the export of 2 mmty each from those facilities when they enter service.

The U.S. became the world’s third largest LNG exporter this year behind Australia and Qatar. Send-outs have increased as new liquefaction units, including Sabine Pass Train 5, Corpus Christi Trains 1 and 2, and Cameron Train 1, along with the first unit at Elba Island LNG, have all come online since last November.

The traditional point-to-point model that has served the global LNG trade for decades has evolved as a more diverse set of suppliers has entered the market and flexible U.S. LNG contracts have driven more spot cargos. “The length of these contracts can vary, of course, most of them, if not all of them, likely do not have destination clauses, so that adds a great deal of flexibility,” Rau said.

But even as commercial structures are evolving with a second wave of U.S. projects and a supply glut is taking shape, long-term contracts have not yet been undermined. They remain in favor with LNG buyers. Since 2016, when exports from the Lower 48 began, more than 3.42 Tcf of LNG has departed the U.S., but just 434 Bcf, or 13.6% of those exports, have been shorter-term spot cargos, according to the Department of Energy.

Last year at this time, Rystad Energy said that long-term contract volumes were on the rise across the globe. But even as the trend persists and the spot market remains challenged by falling prices, the dynamics could eventually shift as more project developers, particularly in the U.S., compete for buyers.

Venture Global LNG Inc., for example, is pushing a new modular design concept that could lower engineering, production and construction costs down.

“They may not need to sign contracts quite as lengthy to cover the construction costs,” Rau said. But for now, “banks like to see longer-term contracts in place before issuing financing and that may be a bit more so at this moment, given the current oversupply and unknown long-term variables such as the impact of renewables on the industry and global political risk.”

2022 software security predictions that should be on your radar