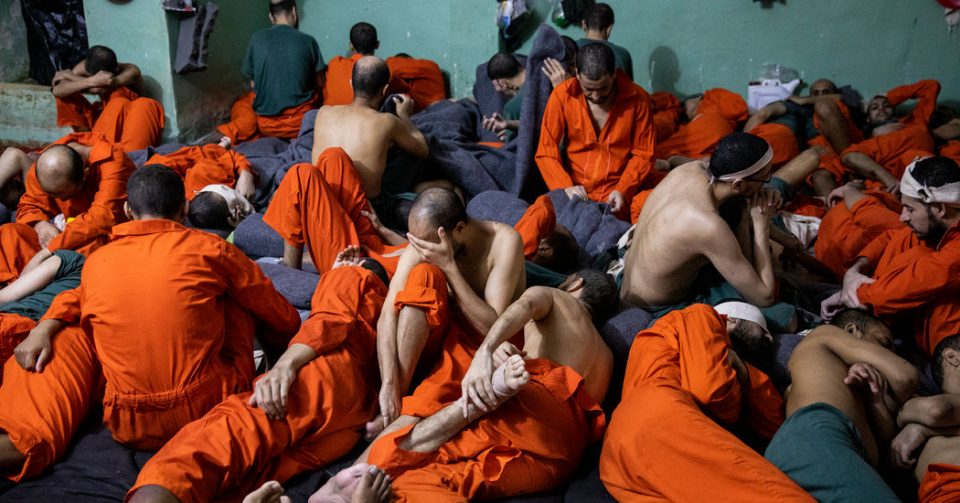 PARIS — As Turkey followed through on its threat to release more Islamic State detainees last week, Western European nations were confronted with a problem they had long sought to avoid: what to do about the potential return of radicalized, often battle-hardened Europeans to countries that absolutely do not want them back.

Faced with fierce popular opposition to the repatriation of such detainees and fears over the long-term threat they could pose back home, European leaders have sought alternative ways to prosecute them — in an international tribunal, on Iraqi soil, anywhere but on the Continent.

But President Recep Tayyip Erdogan of Turkey, made more powerful by a sudden shift in American policy, is determined to foist the problem of the captured European Islamic State fighters back on the countries they came from.

Last week, Turkey sent a dozen former Islamic State members and relatives to Britain, Denmark, Germany and the United States, and Mr. Erdogan says hundreds more are right behind them.

“All of the European countries, especially those with most of the foreign fighters, have desperately been looking for the past year for a way to deal with them without bringing them back,” said Rik Coolsaet, an expert on radicalization at the Egmont Institute, a Brussels-based research group. “But now, European nations are being forced to consider repatriation since Turkey is going to put people on the plane.”

The sudden problem for Europe is a long-tail consequence of President Trump’s precipitous decision last month to withdraw American forces from northern Syria, which cleared the way for Turkey to take control of territory as well as many of the Islamic State members who had been held there in Kurdish-run prisons or detention camps.

The issue is further complicated by the fact that nearly two-thirds of the Western European detainees, or about 700, are children, many of whom have lost one parent, if not both.

Now that more of the former fighters are in Turkish hands, Mr. Erdogan has not hesitated to use the threat of returning them as leverage over European countries who have been deeply critical of his incursion, and who have threatened sanctions against Turkey for unauthorized oil drilling in the eastern Mediterranean off Cyprus.

The fate of the former fighters and their families has become yet another point of contention between Turkey and Europe, which is already paying Mr. Erdogan’s government billions of dollars to stem the flow of asylum seekers from conflicts in Iraq, Syria and Afghanistan.

Turkey is already home to some three million refugees from the Syria conflict, and Mr. Erdogan is determined to lighten his country’s load. But his real intent remains unclear: Does he really plan to send back all foreign fighters to Europe? Or is he opening the spigot, with the threat of a flood to come, to wring concessions from Europe?

What is clear is that with limited military reach in Syria, European nations are ever more vulnerable to Mr. Erdogan’s whims. Turkish officials say that Turkey now holds 2,280 Islamic State members from 30 countries, and that all of them will be deported.

But the numbers and risks for Europe are far greater than for the United States. More than 1,100 citizens of countries in Western Europe are believed to be detained in northern Syria in territory once controlled by the Islamic State, according to a recent study by the Egmont Institute.

Their potential return has confronted European justice systems with competing security and civil liberties demands as they attempt to vet returnees, decide whether to detain them, and build cases on potential crimes that often happened hundred of miles away on remote Syrian battlefields.

France, the Western European nation with the most detainees in Syria, is getting ready to take back 11 former Islamic State members. The Netherlands has also agreed to take back some of its citizens.

On Thursday, a 26-year-old man suspected of being an Islamic State fighter was arrested after landing at London’s Heathrow Airport on a flight from Turkey.

That same day, seven members of a German-Iraqi family arrived in Berlin from Turkey, from which they had been deported after several months in custody over suspected links to terrorism.

The father was detained, but the other family members were allowed to return to their homes.

On Friday, a woman deported by Turkey was detained upon arrival at Frankfurt Airport on suspicion of being a member of a terrorist organization abroad. Federal prosecutors in Germany said the woman, a German citizen identified only as Nasim A., left the country in 2014 and married an ISIS fighter, whom she supported until Kurdish-led security forces detained her this year.

A second woman was released after landing in Germany, but will be tracked by experts on de-radicalization.

German officials said they believed more than 130 people left the country to join ISIS, 95 of whom were German citizens and had the right to return to the country. Nearly a third of the Germans are under investigation by federal prosecutors.

French officials said there had been no change in French policy, which opposes repatriation from Syria.

But pressure has been building, and security experts and some government officials have increasingly warned that the repatriation of militants — and their processing in European courts and detention in prisons — would be the only way to ensure Europe’s safety.

The deteriorating situation in northern Syria, some experts say, further increases the need for an orderly repatriation to Europe.

Left in Syria, more detainees could fall into the hands of Turkish forces or the Syrian government, which could use them as bargaining chips with the West.

Others could run away and try to regroup, or be taken back by Islamic State sleeper cells, as is feared in the case of some women who recently escaped from a camp in the region.

“There are a lot of risks associated with the policy of leaving them where they are,’’ said Anthony Dworkin, a fellow at the European Council on Foreign Relations who has studied the Islamic State’s foreign fighters.

The potential dangers and difficulties are vividly demonstrated in the case of Tooba Gondal, a 25-year-old French citizen of Pakistani origin who grew up and lived in London until she traveled to Syria in 2015. She is believed to still be in the custody of the Turkish authorities.

A mother of two, she does not speak French and had spent most of her life in Britain, and although French intelligence services knew of her case, it is unclear that they had expected her to come to France.

“Tooba Gondal is a very notorious ISIS female recruiter, but until recently she wasn’t on the radar of French intelligence services,” said Jean-Charles Brisard of the Paris-based Center for Analysis of Terrorism, who was first to reveal that she would be deported.

A former London university student, Ms. Gondal became known in the British news media as an Islamic State “matchmaker.” She is accused of persuading other young Western women, like the British schoolgirl Shamima Begum, to marry Islamic State fighters.

She also posed with assault rifles in pictures on social media, and praised the Paris terrorist attacks in November 2015.

In recent months, Ms. Gondal has pleaded to be taken back to Britain, which had issued an expulsion order against her in 2018. She declared in an open letter to The Sunday Times of London that she was a “changed person” who wished to “face justice in a British court.” As a non-British citizen but a French passport holder, she is now likely to be deported to France.

France has already repatriated more than 250 Islamic State fighters and their families from Turkey since signing a bilateral agreement with the government there in 2014. But 400 French citizens are still estimated to be detained in Syria, according to the Egmont Institute, and France does not want them back.

Instead, France wants Iraq to try them, especially the male fighters. French officials have led European negotiations with the Iraqi government to set up trials in Iraq. But disagreements between Iraqi and European officials — over legal matters like the death penalty and costs — have prevented an accord.

“It is legitimate that people who have committed terrorist acts should be judged closest to the place where they committed those said terrorist acts,’’ Sibeth Ndiaye, a spokeswoman for the French government, said at a meeting of the Anglo-American Press Association.

The other French citizens expected to return home — three Frenchwomen and their five children, all under 4 years old — were held in the camp of Ain Issa, according to their lawyer, Marie Dosé.

She said the families escaped in mid-October when the facility was abandoned by Kurdish forces. “They have risked their lives and their children’s to join Turkey and be expelled to France,” Ms. Dosé said.

For more than a year, Ms. Dosé and other French lawyers have fought to bring the mothers back with their children, as the women argued that they wanted to be tried at home. Last year, when a French television crew met one of the four women set to be deported, she said she wouldn’t leave without her son.

“If he leaves, I’m leaving with him,” said Amandine le Coz, a 29-year-old woman who grew up in a suburb near Paris. “He’s my life.”

In France and other European nations, the stories of people like Ms. le Coz and Ms. Gondal have elicited little sympathy.

“There’s been more sympathy for vulnerable children, but as you go up to adults, there’s a lot of pushback against women and there’s even more pushback against male militants,’’ said Joana Cook, a researcher at the International Center for the Study of Radicalization in London.

Dr. Cook, who has studied women and children who have returned to their home countries from Syria, said there had been no known incidents involving returnees.

Instead, terrorist cases, including the failed attempt to ignite a car loaded with gas canisters near the Notre Dame cathedral in Paris, involved women who had become radicalized at home and had never stepped foot in Syria.

“They’ll be freed one day, that’s for sure,’’ Mr. Brisard said. “But it’s preferable that they be incarcerated in French prisons from where they can’t escape. And after they’ve served their sentences, it’s preferable that they be tracked by a competent intelligence service. In Iraq or Syria, I don’t have much faith in their intelligence services keeping track of our jihadists.’’