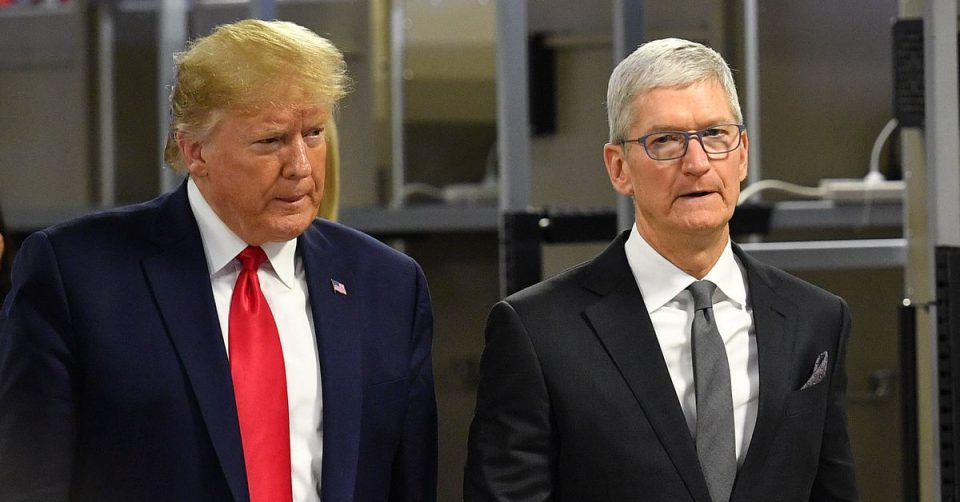 In advance of Trump’s factory tour today, I took a look at the strange relationship that’s developed between Tim Cook and Donald Trump over the past three years. One of the things that popped up was one specific story that Trump would tell about Apple, in rally after rally and meeting after meeting. The idea was that Trump had somehow induced the company to build a new factory in the US, through some combination of tax cuts and trade policy, which was both very politically useful and also very much not true.

Today, perhaps not surprisingly, he told the lie again.

“We’re seeing the beginning of a very powerful and important plant,” Trump said at the factory. “Anybody that followed my campaign, I would always talk about Apple, that I want to see Apple building plants in the United States. And that’s what’s happening.”

This is not true for a couple reasons — one of them nitpicky and one of them a lot more serious. The nitpicky problem is that Apple isn’t actually building a manufacturing plant. The company is building a new campus in Austin, but it’s miles away from the factory and the jobs are going to be very similar to the kind of white-collar design and engineering work that Apple does in Cupertino. Apple doesn’t do its own manufacturing, and the plant Trump is standing in belongs to a contractor called Flex Ltd (formerly Flextronics).

The factory Trump claims he “opened” was opened under Obama

But the bigger problem is that what Flex is doing isn’t anything new. This particular factory has been manufacturing Mac Pros since 2013, when Cook first announced it would assemble them in the United States. That’s before Trump took office. So the idea that we’re seeing the beginning of something, or that Trump has done something during his presidency to bring about this particular instance of US manufacturing, just doesn’t hold water.

Trump is talking as if Apple has created a brand-new factory in Texas to build Mac Pros. If all you saw was a five-second clip on the news, that’s probably the impression you would get — but it just isn’t true.

People often get very worked up about whether a politician is technically “lying” when they say something that isn’t true, or if they’ve just stumbled into falsehood as if accidentally falling off a chair. But when you say the same false thing over and over again for a year and a half, it’s hard to call it anything else.

Speaking of which, Trump just aired the lie on Twitter as well:

Today I opened a major Apple Manufacturing plant in Texas that will bring high paying jobs back to America. Today Nancy Pelosi closed Congress because she doesn’t care about American Workers!

You can see the video footage of Trump’s tour for yourself below.

Things actually get worse if you keep watching. Later in the video, Trump takes back the mic for a quick aside on how his tariff policy has benefited the factory.

This is also not true.

In fact, Apple is currently paying tariffs on a number of Mac Pro parts, which must be imported from China to Texas before the final device can be assembled. (Ten of Apple’s requested tariff exemptions were issued earlier this year, but five others were denied, including taxes on the cooling system, charging cable, and various circuit boards.) Because Trump’s current array of tariffs are levied on components but not finished devices, Apple actually doesn’t pay tariffs on the iPhones and MacBooks that are assembled in China.

The net effect is a tax on electronics assembled in the US. It’s more expensive to assemble Mac Pros in the US, not just because of labor and production costs, but explicitly because of the tariffs Trump has placed on intermediary goods. Apple even briefly flirted with moving Mac Pro production back to China, as a way of driving home the cost of those tariffs, although the company ultimately backed down.

The structure of those taxes could change in the future, and a tariff on phones and other electronics has already been formally proposed, although it keeps getting delayed. On the other hand, talks with China could be so productive that earlier rounds of tariffs are lifted completely. With that much uncertainty, it’s hard for anyone to be sure about the best way to arrange a supply chain.

But the result is an alarming level of falsehood even by Trump standards. He claimed to have brought Apple manufacturing to the United States while standing in a factory that had already been building Apple products for six years, and one that had nearly lost the gig — not benefited — because of Trump’s trade policy.

Can you make your supply chain smarter?

U.S. Factory Production Plummets by Most in Records to 1919

The Wool Factory getting prepared to open to public – – CBS19 News