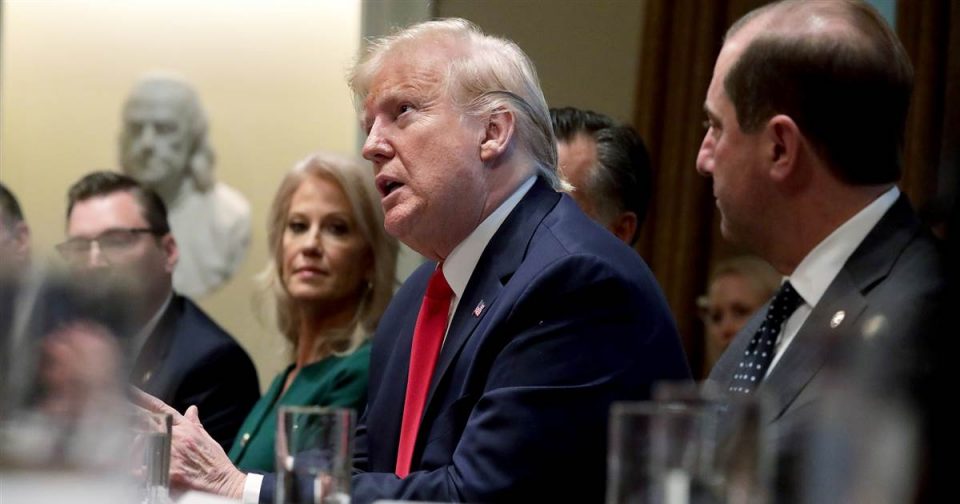 Trump told the group he was concerned that a ban on flavored vaping products could lead children to seek out unsafe alternatives that would pose an even greater risk to their health.

“If you don’t give it to ’em, it’s going to come here illegally,” the president said, adding that instead of companies selling a regulated product, “they’re going to be selling stuff on a street corner that could be horrible. That’s the one problem I can’t seem to forget.”

The president again appeared to back the idea of imposing a minimum age requirement of 21 for the purchase of vaping products, saying “everyone seems to agree” on that idea.

Trump also said earlier this month that the government was “going to have an age limit of 21 or so” for vaping. The move would likely require the passage of legislation.

During Friday’s White House meeting, doctors, medical associations and anti-vaping advocates urged Trump to ban flavored vaping products and take other steps to reduce their use among minors, while officials from vaping companies warned Trump the move could cost jobs and called fresh restrictions unnecessary.

Much of the debate Friday centered around the use of flavors in vaping products. Juul, one of the companies in the room, has already stopped producing most flavored products.

Sen. Mitt Romney, R-Utah, clashed multiple times with vaping advocates, complaining that half the students in his state’s high schools are vaping.

“How about the children? We’ve got almost 6 million kids addicted to nicotine and they’re getting addicted to nicotine because of flavors,” Romney said. He said minors think vaping is “just a candy type product. It’s the flavor that’s drawing the kids in, it’s a health emergency. … It’s killing our kids.”

“Most adults are not using flavors,” he said. “Yes, they do,” advocates shot back.

Trump had announced in September, with strong support from first lady Melania Trump, that he would ban flavored e-cigarettes that health experts warn hold special appeal to teenagers.

But the administration has not taken any action since that announcement, fueling speculation that Trump was backing away from a ban.

In Friday’s meeting, public health officials urged Trump to stick with that move.

During the session, the president asked about the benefits of vaping for adults, and also about the possibility of state-based solutions to address the health risks associated with vaping.

Trump, who has been under pressure from both sides of the vaping debate, has faced a difficult political balancing act on the issue.

Conservative activists have shown polling and other data to the White House and the Trump campaign to argue that cracking down on vaping could cost the president votes in key swing states such as Florida, Michigan and Wisconsin.

But failing to take concrete action on the issue could hurt him with suburban women, a key demographic with whom he is already struggling, who are concerned about the health risks to teenagers and young adults.

Vaping supporters have held demonstrations outside Trump’s rallies and the White House in recent months.

Meanwhile, federal health authorities have reported an outbreak of mysterious illnesses linked to the popular devices.

As of November, there have been more than 2,000 vaping-related lung injuries in all states except Alaska, according to the Centers for Disease Control and Prevention. Thirty-nine deaths have been confirmed in 24 states and the District of Columbia as of November, the agency said.

Shannon Pettypiece is the senior White House reporter for NBCNews.com.