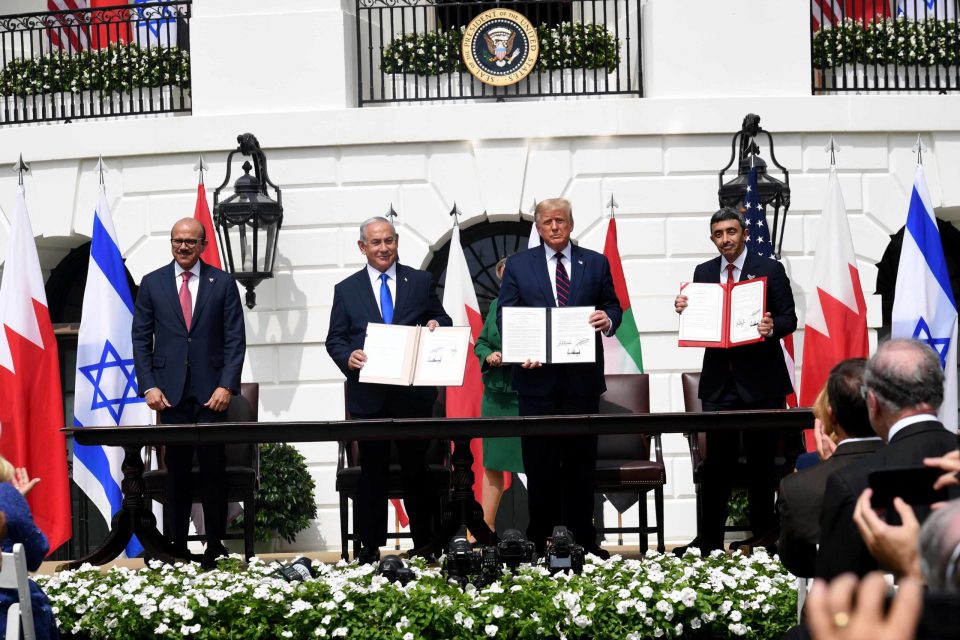 President Donald Trump hailed yesterday the peace deals between Israel and the United Arab Emirates and Bahrain as “the dawn of a new Middle East” that “sets history on a new course.” Standing with Israeli Prime Minister Benjamin Netanyahu and the foreign ministers of the UAE and Bahrain, Trump proclaimed: “These agreements prove that the nations of the region are breaking free from the failed approaches of the past.” Netanyahu called it “a pivot of history” that “heralds a new dawn of peace.”

Fine print: The deal signed with the UAE expresses a desire to establish diplomatic and economic ties on a variety of issues and for the establishment of embassies between the two countries. It also includes a call for “a just, comprehensive and enduring resolution of the Israeli-Palestinian conflict.” The text of the Bahrain deal, which is much less detailed, vowed to establish “full diplomatic relations” and seek future agreements in a variety of areas.

Looking head: In remarks in both the Oval Office and at the ceremony on the White House’s south lawn yesterday, Trump indicated that around five other Arab or Muslim countries may soon join the fold and normalize relations with Israel. Speaking with reporters before departing to Philadelphia, Trump suggested that Saudi Arabia — which has recently toned down its rhetoric on Israel — is on a similar path and will come along “in the right time.”

Credit due: David Makovsky, a former peace negotiator and currently the Ziegler distinguished fellow at The Washington Institute, told JI the significance of this moment is that the UAE wants warm peace with Israel, whereas in the past, peace with an Arab state would be “grudging.” Makovsky posited that the Emiratis understood they are “at their point of optimal leverage,” because Trump is facing an uphill reelection battle, “and to gain a Middle East achievement, he will pay top dollar, including the F-35 jets.” By signing this deal, Makovsky added, the UAE believes they are also buying “political risk insurance, with the possible change in focus in a post-Trump era. And they get the bonus of saying, ‘We’re the ones who buried annexation.’ I give the Trump administration credit that they picked up on it and they ran with it, but it is the Emirates that made the shift.”

Down but not out: Israel’s Ambassador to the U.N. Gilad Erdan insisted that Netanyahu hasn’t given up on his initial plan to annex parts of the West Bank in the future, pointing to the language the UAE foreign minister used in his remarks about “halting” annexation. “I spoke with the prime minister and I know we never gave up on applying sovereignty,” he said. “Everyone understands that when we want to extend [Israeli] sovereignty over Judea and Samaria, we need the support and the cooperation of the American administration, and right now they have decided what their priorities are.”

What Democrats are saying: Jewish Insider’s Marc Rod spoke with several Democratic members of Congress about the new developments. Rep. Brad Schneider (D-IL), who attended the event, expressed hope that this “historic deal is a harbinger of things to come, including peace between Israel and the Palestinians.” Schneider pointed out that while Trump deserves credit for this step forward, “it took years to build” and the deals don’t “diminish” the risks Israel is still facing from an emboldened Hamas in Gaza and Hezbollah in Lebanon and “under Trump, Iran is closer to nukes.” Sen. Kirsten Gillibrand (D-NY) applauded the agreements, telling JI: “I hope that these first steps are followed by further efforts to normalize relations within the region and to work toward a two-state solution that will ensure a lasting and secure peace. As a steadfast ally to Israel, I stand ready to assist in these efforts along with my colleagues in the Senate in any way that I can.” Sen. Elizabeth Warren (D-MA) said, “I’m always glad to see steps toward peace.”

Word from Biden: In a statement released late last night, Biden said, “It is good to see others in the Middle East recognizing Israel and even welcoming it as a partner. A Biden-Harris administration will build on these steps, challenge other nations to keep pace, and work to leverage these growing ties into progress toward a two-state solution and a more stable, peaceful region.”

Key to power: At the start of their Oval Office meeting, Trump presented Netanyahu with a ceremonial gold key as “a special token of affection… It’s a key to our country and to our hearts. And you’ve been an amazing leader for a long period of time.” Netanyahu responded in kind: “You have the key to the hearts of the people of Israel because of all the great things you’ve done for the Jewish state and the Jewish people.”

Packed event: Close to 1,000 guests gathered on the South Lawn to witness the historic signing of the Abraham Accords, including a veritable who’s who of Jewish religious, political and organizational leaders across the spectrum. The South Lawn was divided into three sections: Around 150 VIPs up front; another 600 general attendees behind them; and the media along with administration staffers on the side.