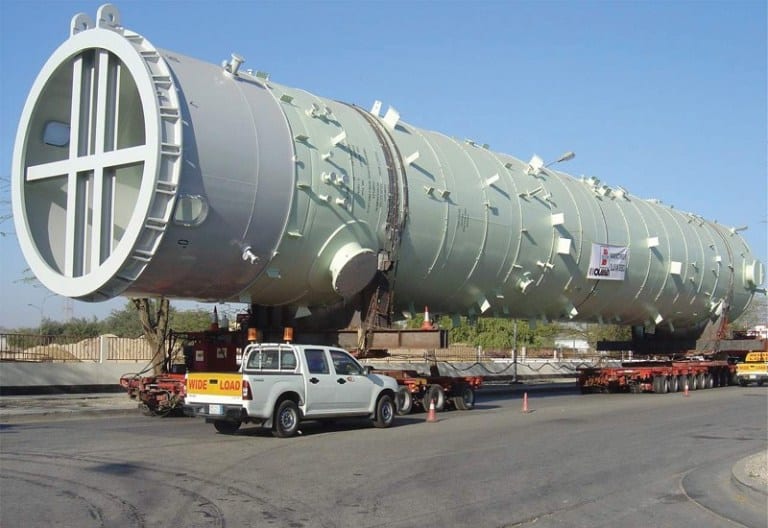 Moving oil rigs and oil-drilling equipment is not for the faint of heart.

“There are no classes at the University of Texas training drivers or training people how to break down and assemble rigs — training is sort of on the job,” said Michael Dyll, chief executive officer of Houston-based Texas International Freight.

“Domestically, we haul heavy equipment by truck within the United States. We also work with the rail lines to ship very heavy liquified natural gas tanks and transformers,” said Dyll, who has been in the freight forwarding business since 2006.

Dyll said when it comes to transporting rigs and oil field equipment, trucks mainly will be used. Rig mobilization and assembly expenses depend on how far the rig is being transported, but can run anywhere between $100,000 and $350,000.

“You load all those oil rig pieces all disassembled, you’ll load those up on a massive heavy-duty trailer truck and haul them away to whatever oil field they are going to,” Dyll said.

The rigs are taken from the shipyard by trucks — usually flatbeds — to someplace nearby such as the Port of Galveston and shipped overseas.

In August, another freight forwarder achieved one of the biggest moves by tractor-trailers ever in the Houston area, requiring a caravan of more than 30 Texas state troopers and 20 cherry-picker trucks to block traffic.

Houston-based Specialized Logistics hauled a pair of enormous crates carrying parts of a South Korea-bound drilling ship to be used in oil exploration.

Transporting the drilling ship required two flatbed trucks transporting the crates 108 miles to the Bayport Terminal, a major port along the Bayport Ship Channel off Galveston Bay. The drill ship was then transported on a freighter bound for South Korea.

“We have done some big loads, but this is definitely the biggest route with the biggest boats we have ever transported,” Denton Townson, a spokesman for Specialized Logistics, told FreightWaves.

Dyll said he has been behind the wheel a lot of times when his company has transported rigs or equipment. He said it can be a dangerous job and drivers have to stay alert.

“We had the Texas Department of Public Safety (DPS) tell us that the most dangerous time to be out on the road in the Permian Basin and Eagle Ford Shale statistically is Tuesday afternoon,” said Dyll, who serves on the Texas Freight Advisory Committee.

Around 11% of Texas’ traffic fatalities happened in Permian Basin in 2017, according to the Texas DPS.

Dyll added, “I can tell you from being on a rig transport a few times that you have to be careful, there’s a lot of things going on, a lot of moving parts, a lot of people doing their work using equipment, and there’s a lot of commotion. It can be dangerous.”

Founders Factory launches healthtech hub in the US