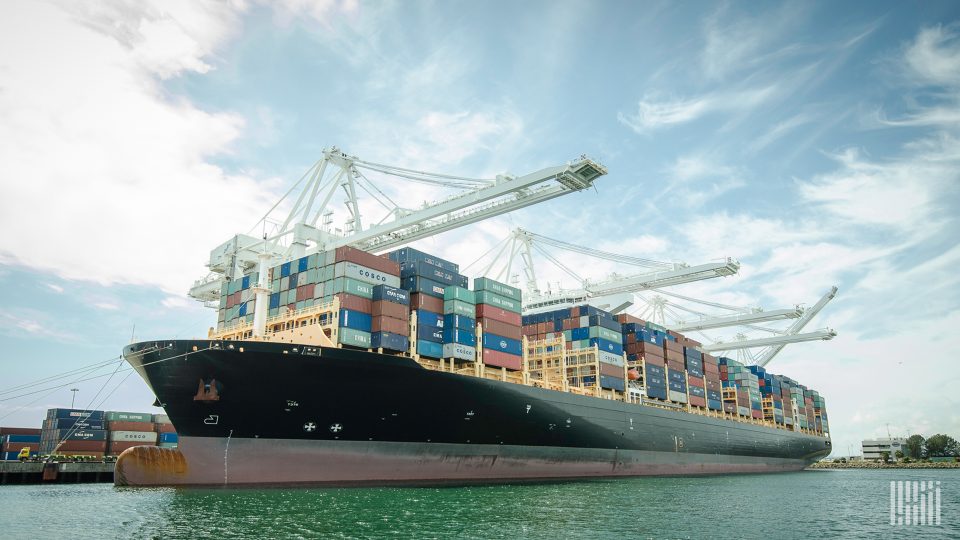 Is this the end of the mysterious trans-Pacific rate plateau? The good news for ocean carriers — and bad news for shippers — is that rates are rising yet again.

Base spot rates for container shipments from Asia to the U.S. West Coast had been curiously flat since late September. Rates kept to a narrow band at record-high levels of around $3,800-$3,900 per forty-foot equivalent unit (FEU).

The unnatural flatness of the rate trend line during a period when demand was not flat led to speculation that the trans-Pacific rate level was, in fact, not natural.

The most common theory was that liners declined to charge higher spot rates after a meeting with Chinese regulators in mid-September. Actual rates continued to increase when including premium charges, with the static base rate meant to assuage the Chinese — or so the theory went.

Whether that speculation is true or not, something appears to have changed. Spot rates are headed higher.

Rates up to both coasts

According to the Freightos Baltic Daily Index, Asia-West Coast rates (SONAR: FBXD.CNAW) rose to a fresh all-time high of $4,189 per FEU on Monday, up 8% from last Friday. Rates are now triple what they were one year ago.

Rates also just jumped on the Asia-East Coast route (SONAR: FBXD.CNAE). Spot rates were $5,397 per FEU on Monday, up 9% from last Friday. Rates in this trade lane are now double what they were one year ago.

‘Tacit agreement’ coming to an end?

According to Judah Levine, research lead at the Freightos Group, “Still-surging demand for ocean freight and the resulting global equipment shortage pushed rates up across most of the major ex-Asia lanes this week, after what seemed like a slowing in upward pressure last week.

“Most surprisingly, rates on both trans-Pacific lanes climbed significantly for the first time since mid-September, perhaps signaling that carriers’ tacit agreement with Chinese regulators not to increase prices on these lanes may be coming to an end,” Levine speculated.

No letup in sight

The stage appears set for continued ultra-high rates in January.

After adding surcharges in mid-December, a number of carriers are scheduled to implement general rate increases (GRIs) starting Friday, according to notices posted through Distribution Publications.

Jan. 1 Asia-U.S. GRIs of $1,000 per FEU have been announced by CMA CGM, COSCO (for service contracts only), Evergreen, HMM, ONE, Yang Ming and ZIM. In addition, Hapag-Lloyd has a $1,500 per FEU GRI listed for Jan. 1 consisting of previously postponed GRIs.

Meanwhile, it’s busy as ever at Southern California ports.

A map from MarineTraffic using Automated Identification System (ship positioning) data reveals the extent of the container-ship pileup in San Pedro Bay. The situation has not improved over recent weeks — if anything, it appears to have worsened.

It’s the same story on the terminal side of the equation. The Port of Los Angeles provides visibility via its daily data from The Signal. In recent months, this data has shown that congestion appears to be continually pushing significant volumes from one week to the next.

As of Tuesday, the port was projecting imports of 116,501 twenty-foot equivalent units (TEUs) during the current holiday week. Manifest data for the first half of January shows considerably higher volumes topping 150,000 TEUs per week.

Put it all together — the port stats, the ships at anchorage, the proposed GRI schedule — and it raises the question: Is the recent liftoff from the rate plateau just a blip or is it a sign of things to come? Click for more FreightWaves/American Shipper articles by Greg Miller

Afghans at risk after helping British forces can move to UK

China shipping logjam chokes Christmas in US and Europe