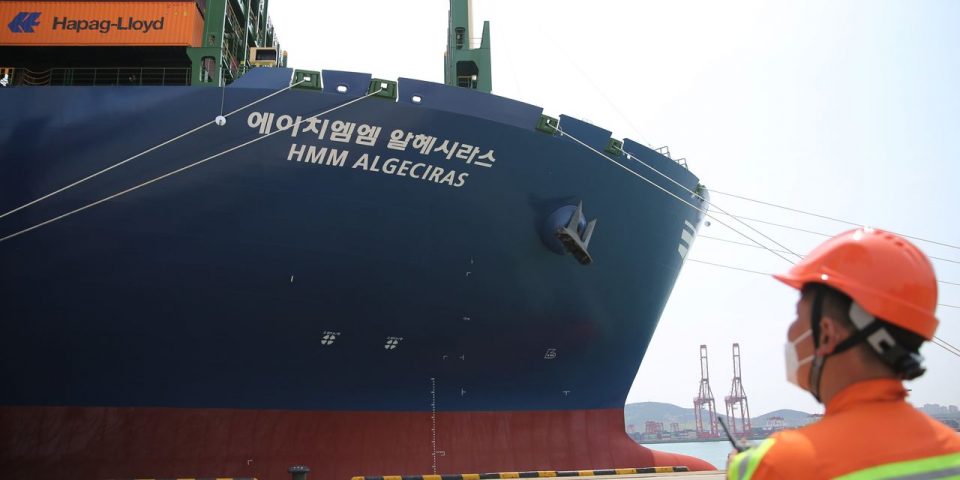 Shipping companies aren’t betting against globalization over the long term even if as they pull back ocean-going capacity this year. The turbulent response around the world to the coronavirus pandemic, with supply chains rattled and shortages of critical goods in many countries, has some world leaders calling for reshoring of manufacturing. Ship owners aren’t buying it, the WSJ Logistics Report’s Costas Paris writes in a Shipping Matters column, reasoning that the pandemic and the crumbling trade economy is a detour from global growth and not a sea change. BIMCO’s Peter Sand says China’s sprawling factory sector and its extensive shipping infrastructure gives the country too big an advantage for companies to ignore. Germany’s

is among the operators committed to ultralarge container ships, and the operator isn’t changing course. Manufacturers may add factories close to home, the carrier says, but they won’t walk away from China.

soaring sales growth in a stormy retail market is coming at a high cost. The company’s sales jumped 26% in the first quarter as consumers locked down at home by the coronavirus restrictions rushed to order goods online. The WSJ’s Dana Mattioli reports the company’s profit also tumbled 29% to $2.54 billion and that shipping costs in the normally slower quarter skyrocketed 49% to $10.94 billion. The results reflect the central role Amazon has played during the crisis, delivering goods to people stranded at home by shelter-in-place orders. They also show the rapid adjustment the company has undertaken. Amazon carried nearly twice as much inventory on its balance sheet as it counted in the year-ago quarter, and it is adding 175,000 warehouse and delivery workers to handle the surge. The company now projects about $4 billion in costs in the second quarter related to the Covid-19 outbreak.

The doors to U.S. retail stores will soon start cracking open a bit.

plans to reopen 68 stores on Monday in states that have loosened restrictions, the WSJ’s Suzanne Kapner reports, joining a handful of other retailers that are limping back to life after the coronavirus forced them to shut stores. Macy’s Chief Executive Jeff Gennette expects to open all the company’s roughly 775 stores in the next six weeks, assuming continued progress in lowering infection rates in the U.S. Best Buy is also looking to open about 200 stores this month, and both retailers will have sharply restrictive operations meant to keep shoppers and consumers safe. The opening plans suggest the growing urgency across a retail sector that’s taken big financial hits from the lockdowns meant to slow the coronavirus spread. Sales at department stores plummeted nearly 20% from February to March, according to federal figures.

“
Globalization will by no means be withdrawn and neither will those ships.
”


— A Hapag-Lloyd spokesman, on the container line’s mega-ship fleet.

Annual decline in capacity available in the bellies of passenger aircraft in March globally, according to the International Air Transport Association.

Consumer spending fell 7.5% in March, the steepest decline in records dating to 1959. (WSJ)

The eurozone economy shrank at the fastest pace on record during the first three months of this year. (WSJ)

The White House is confident China will meet its obligations under a trade deal and increase imports from the U.S. by $200 billion over 2017 levels. (WSJ)

revenue ticked up 1% in its second quarter despite the coronavirus impact in China. (WSJ)

Changes in consumer behavior under the pandemic helped push McDonald Corp’s sales down 6% in the first quarter. (WSJ)

Inc, is reducing its fleet amid plans to cut flying by 70% by June. (WSJ)

More ships sailing between Europe and Asia are taking the long route around the Cape of Good Hope to avoid the Suez Canal. (Lloyd’s List)

is shifting delivery of its first Semi truck to 2021, putting the vehicle two years behind schedule. (Commercial Carrier Journal)

Freight broker C.H. Robinson Worldwide Inc, is furloughing or reducing hours for 7% of its workforce after cash flow from operations fell 77% in the first quarter. (Fox Business)

lost $7.3 million in the first quarter despite a 4.1% gain in revenue. (Chattanooga Times Free Press)

Kuehne + Nagel International AG expects shipping markets to rebound in the second half of the year. (Lloyd’s Loading List)

Commentary: How are freight professionals adjusting to COVID-19?