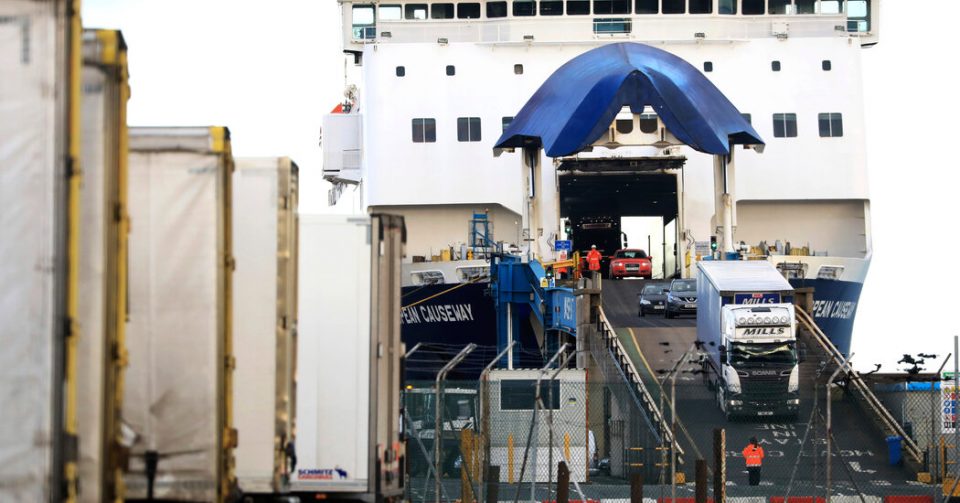 LONDON — Few people on either side of the English Channel believed that Britain’s exit from the European Union would go off without a hitch. So when horror stories surfaced about rotting shellfish, empty delivery trucks and eye-popping customs fees, many reacted less with shock than grim resignation.

But Britain and the European Union have also fallen out politically and diplomatically, with a speed and bitterness that has surprised even pessimists about the relationship. While these strains are less tangible to Britons than having to pay extra costs for imported coffee from Italy, they could have an equally corrosive long-term effect.

“These are not purely teething problems,” said Kim Darroch, who served as Britain’s permanent representative to the European Union and later, as ambassador to Washington, citing the government’s all-purpose explanation for Brexit problems. “They are structural problems that arise from not being in the single market. This is what a ‘hard Brexit’ looks like.”

Prime Minister Boris Johnson replaced the minister responsible for dealing with Brussels, Michael Gove, an ambitious politician known for his emollient manner, with David Frost, a more rough-edged functionary who hammered out the trade agreement between Britain and the European Union.

In a recent speech that sketched out his vision of a “Global Britain,” Mr. Johnson pledged to deepen trans-Atlantic ties and even build Britain’s presence in the Pacific. But he barely mentioned the European Union. When he did, it was to emphasize how much Britain would gain by severing ties with it.

“The U.K. really needs a special relationship, a deeply interlinked relationship, with the E.U.,” said Jeremy Shapiro, research director of the European Council on Foreign Relations, a research institute in London. “But this government has defined itself ideologically as not needing the E.U. for anything.”

Some of these tensions are the inevitable result of what was, after all, an acrimonious divorce, four and a half years in the making. The trade agreement was less a springboard for future cooperation than a bare-bones severance deal that left many issues, including the future of London’s mighty finance industry, to be thrashed out later.

In a sign of the battles to come, the Bank of England’s governor, Andrew Bailey, warned last week of a “serious escalation” in tensions between London and Brussels if the European Union tried to force banks to move the clearance of euro-denominated derivatives trading from London to the continent.

Britain, he told Parliament, would view that as “highly controversial and something we would have to resist very firmly.”

As always with Brexit, much of the antagonism is being driven by domestic politics. Feelings have become raw in Europe because of the perception that Britain, which has rolled out vaccines much faster than the European Union, did so in part by hoarding doses from its homegrown manufacturers.

President Emmanuel Macron of France questioned the efficacy of a vaccine developed by AstraZeneca and the University of Oxford in people over the age of 65. That nationalistic message may have played well with his political base, even if critics pointed out that the World Health Organization and the European Union had recommended the vaccine for people of all ages.

Simon Fraser, a former head of Britain’s Foreign Office, said the strain of the pandemic and the vaccine race had deepened tensions that would have simmered anyway. “The tensions around the vaccines have been totemic,” he said.

In Britain, some politicians have seized on the vaccine gap as vindication of the vote to leave. On a range of issues, it is clear that the fulfillment of Brexit has not soothed antagonism toward the E.U., either in the government or among the hard-core band of Brexiteers in Mr. Johnson’s Conservative Party.

On Thursday, these lawmakers, known as the European Research Group, called on the government to scrap the Northern Ireland Protocol. That is the complex, hard-fought agreement with Brussels that allows Northern Ireland to preserve an open border with Ireland, an E.U. member, even after leaving Europe’s single market along with the other nations of the United Kingdom.

Under the terms of the deal, Britain has agreed to subject goods flowing into Northern Ireland to customs and health checks. Confusion over the new rules has interrupted some of that trade, leading to empty shelves in Northern Irish supermarkets and fears that the situation could get worse, as grace periods on some checks expire.

The protocol has already come under fire from both sides: The European Union threatened to upend it during the dispute over vaccine supplies, while Mr. Johnson’s government warned last fall that it would abandon it if it was not able to come to terms with Brussels on a trade agreement.

The latest demands by the Brexiteer lawmakers may reflect a simple desire to stay in the limelight, having accomplished their defining goal of leaving Europe. But it also dramatizes the enduring appeal of euro-skepticism — a narrative of grievance that British politicians can deploy to deflect criticism for anything from trade hiccups to deeper economic problems.

For lawmakers and the government, bashing Brussels became all the more tempting after the European Commission, the E.U. executive arm, threatened to rip up one of the key provisions of the protocol last month. While it reversed itself after a few hours, the threat is now regarded as a self-inflicted wound of rare magnitude.

“Why not kick the E.U. when it’s down?” said Timothy Bale, a professor of politics at Queen Mary University of London. “That’s long been a reflex for this government, and it is very hard to get out of this reflex.”

Building bridges to Brussels is a nonstarter for the opposition as well. The Labour Party suffered a landslide defeat to the Conservatives in 2019 because it lost traditional Labour voters who felt economically marginalized and socially threatened — trends they blamed on membership in the European Union. Mr. Johnson won them over by promising to “Get Brexit done.”

So far, the Labour leader, Keir Starmer, has not challenged the government’s handling of relations with Brussels. Instead, he has tried to avoid being drawn into a debate with Mr. Johnson over issues like his former support for keeping Britain under the European medical regulator.

There are some signs the hard feelings might soften. Mr. Macron has changed his tune on the AstraZeneca vaccine, saying that he would now happily take it. Political analysts said that when Mr. Johnson shuffles his cabinet in coming weeks, he might actually recruit ministers who voted to stay in the European Union.

Still, said Mujtaba Rahman, an analyst at the political risk consultancy Eurasia Group, old habits are hard to break — and the political incentives do not currently favor harmony across the channel.

“Brexit is the gift that keeps giving for the Johnson government,” he said. “In Europe, there is this sense that the U.K. keeps trying to score points. The risk is that the Europeans will feel the need to smack back.”

Is a Blackhawks Trade for a Goalie Coming During the 2022 NHL Draft?

Chelsea confirm another ludicrous issue after decision from the UK Government