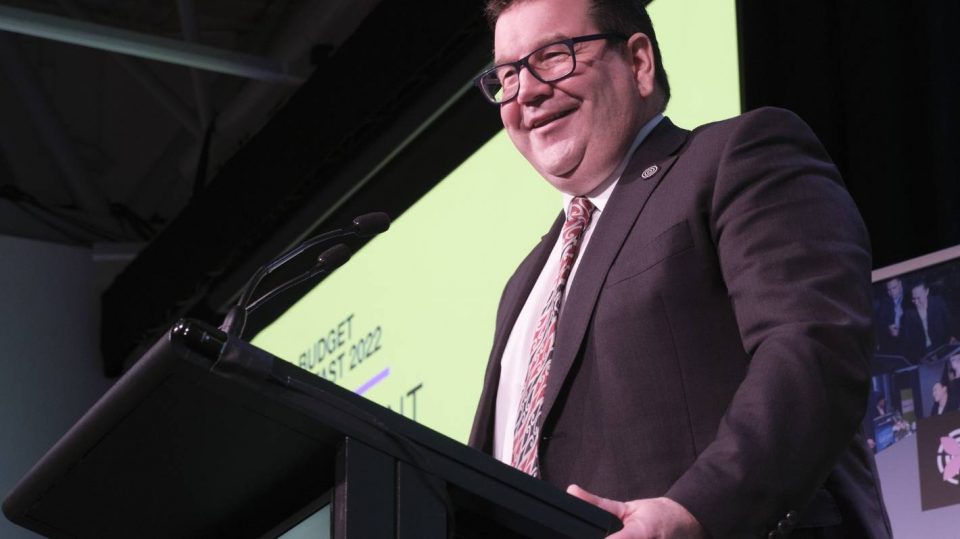 Finance Minister Grant Robertson at a pre-Budget breakfast speech for the Wellington Chamber of Commerce.

Jon Johansson is a former political scientist. He was chief of staff to Deputy Prime Minister Winston Peters, and is now a Wellington-based communications consultant.

OPINION: As the Government readies for its penultimate Budget before facing the verdict of voters next year, it will keep telling itself that it can defy gravity and recover its previous ascendancy.

Pre-Budget announcements are adding up, but the public is well used to yearly gestures of good intentions. But it’s delivery that matters. What voters will be looking for next year is results and signs their material positions have improved.

Yet some months back Finance Minister Grant Robertson signalled where the big-ticket new spending was being directed in this year’s Budget – health and climate.

But the health restructure will not deliver one better service by next year’s election so lacks political power, however conceptually appealing the new structures are. Meanwhile, long waiting lists for non-Covid related health services, many existential in nature, keep growing.

The Budget will also direct huge financial and regulatory resource towards the climate mitigation through emissions reduction. They may or may not fuel transformational change for the 50% of emissions the plan actually covers in tomorrow’s announcement. But it will also bring into stark relief agriculture being out-of-sequence with the burdens now put on other sectors.

National has wisely endorsed emissions budgets while reserving its position on specific emission reduction policies. Take EVs. Judging by the endless advertisements for the feebate on EVs and the high uptake of the subsidy by urban car owners, the scheme is going gangbusters.

But the feebate scheme was sold as fiscally neutral. Given the penalty scheme isn’t making a dent on the cost of taxpayer subsidies flying out the door, fiscal neutrality appears more aspirational than real.

There may be a surprise or two in the Budget, but the signalling so far suggests that priorities were decided well before Labour’s political dynamic soured and economic conditions deteriorated. There’s also a political risk that pumping another $6 billion into the economy will not help voters reeling from budget deficits of their own as inflation eats away at their pay packets.

Last year’s Budget, described then as the first in a Budget trilogy, was delivered when the Government had full spectrum control and National remained a rabble. That is no longer the case.

With the cost-of-living front and centre and Covid no longer the support prop it once was for Labour’s popularity, the Budget’s rhetoric will be interesting to hear.

But let’s face it, it’ not an easy time being an incumbent. Our government leaders need only look across the ditch to see Scott Morrison staring down the barrel of defeat in Australia. Unless he turns the polls around, ScoMo is going to lose to Anthony Albanese, the epitome of a party apparatchik.

Across the Pacific, Joe Biden’s presidency is proving hugely disappointing, beset as it is by an inability to restore promised civility, pass any meaningful legislation, or get, well, anything done. His Democratic Party faces losing both Houses of Congress, with only the reversal of Roe v Wade by the Supreme Court, if confirmed, likely to get enough Democratic-leaning voters to the polls in the November mid-terms to avert a disaster.

One way or another, chaos reigns, and I haven’t even touched on Putin’s folly. It’s a bad time for incumbents and in some respects, we’re seeing the limits of the marketing approach Simon Bridges described and decried in his valedictory.

Substance trumps rhetoric, focus groups, and all the other marketing techniques that steer modern governing. We’ll see on Thursday and in the Budget’s aftermath whether Labour’s sequel offers the substance to alleviate the testing economic conditions voters are experiencing.

An innovative way to clean up CT litter

River Erosion Needs to be Recognised as a Natural Disaster