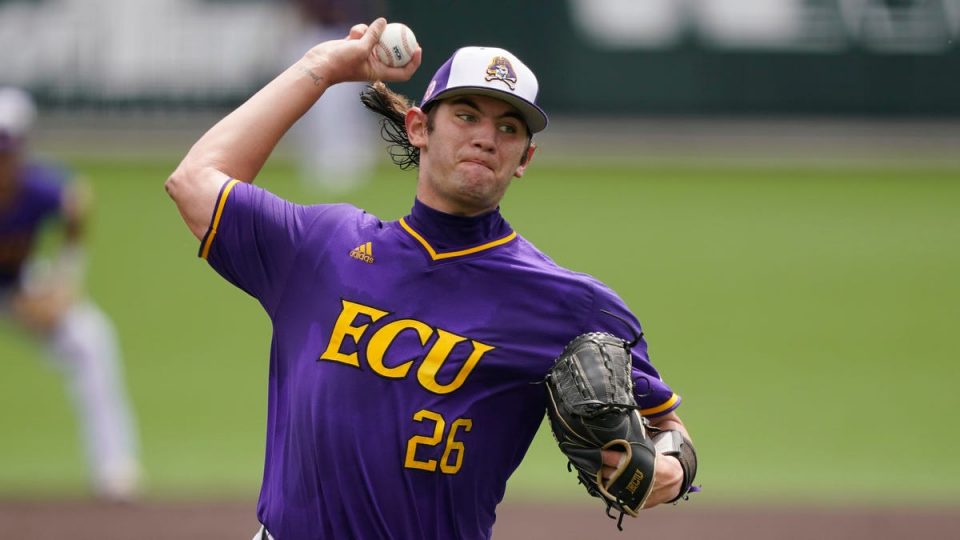 Remember that old baseball saying that you can never have enough pitching?

The Cleveland Indians are trying.

In the First-Year Player Draft that concluded Tuesday, Cleveland drafted 21 players (20 rounds plus one competitive balance pick), and 19 of them were pitchers.

That’s a total of 172 pitchers. That still may not be enough, but that definitely is a lot.

“That wasn’t our plan going in,” said Indians Scouting Director Scott Barnsby, who selected pitchers with all but two of the team’s 21 draft picks, “but we felt like we took advantage of the strength of this draft, which was college pitchers.”

Eighteen of the 19 pitchers drafted by Cleveland were college pitchers, starting with their No. 1 pick (No. 23 overall), Gavin Williams, a 6-6, 238-pound right-handed fireballer who averaged 14.3 strikeouts per nine innings for East Carolina University, where he introduced himself by hitting 100 mph as a freshman.

The Indians selected three University of Florida pitchers in the first 10 rounds of the draft: Tommy Mace with the competitive balance pick (between the second and third rounds), Jack Leftwich in the seventh round, and Franco Aleman in the 10th round.

“The SEC is an elite conference, one of, if not the best conference in the country,” Barnsby said. “If you look back at the history of the University of Florida program, they produce a lot of quality players, and they compete at the highest level. It just fell that way, but we’re excited to add three players from that elite program. We feel it will benefit them in the long run.”

The run on pitching by the Indians and other major league teams in the draft – the Angels used all 20 of their draft picks on pitchers – is the product of an unusual set of circumstances. In last year’s COVID-reduced season the First-Year Draft was just five rounds, and college players were granted an additional year of eligibility.

“We were trying to maximize the draft pool, and this was a unique situation,” Barnsby said. “Especially with college pitchers who were given an extra year of eligibility. Guys who would have been taken in rounds six to 20 last year went back into the draft this year.”

That deepened the depth of this year’s draft, which was already college pitching-heavy, then got further extended by the players who took advantage of their additional year of eligibility to fatten their draft profile with another solid college season.

“For college guys, track record is important,” Barnsby said. “Several of these guys were eligible (to be drafted) last year and were certainly in our mix. So we feel really comfortable with the history we have with them. With some experience under their belts, we’re hopeful there is a shorter learning curve with some of these guys.”

In the Indians’ case, two other factors entered into the equation. Having traded pitching stars such as Corey Kluber, Trevor Bauer, Carlos Carrasco and Mike Clevinger over the last few years, Cleveland’s pitching pool, particularly the starting pitching, had grown thin.

Fortunately, however, the Indians have a well-earned reputation for drafting and developing pitchers into quality major league starters. In the 2016 First-Year Draft the Indians reeled in 60% of their 2021 opening day rotation: Shane Bieber (4th round), Aaron Civale (3rd round), and Zach Plesac (10th round). After just 2 ½ minor league seasons Bieber emerged as a major league star, winning the All-Star Game MVP Award in 2019 and the Cy Young Award in 2020.

Unfortunately for the Indians, all three pitchers spent multiple weeks on the injured list in the first half of this season – Bieber and Civale are still unavailable – as Cleveland saw its entire opening day rotation wiped out by injuries or poor performance.

That sudden and calamitous development coincided, not surprisingly, with a plunge in the AL Central standings for the Indians. From June 18 through July 7 the Indians lost 14 of 18 games, while reinforcing the legitimacy of the “You can never have enough pitching” non-cliché.

So maybe it shouldn’t have been a surprise that Cleveland would sell out for pitching, pitching, and more pitching in this season’s First-Year Draft.

“We feel really strong about our player development staff, and the incredible job they do with our players,” said Barnsby after this year’s pitching roundup. “We feel we’ll get all of them signed, and every one of these players has a chance to impact our major league team sometime down the road.”

Reframing How We Look at Supply Chain Finance and Dynamic Discounting