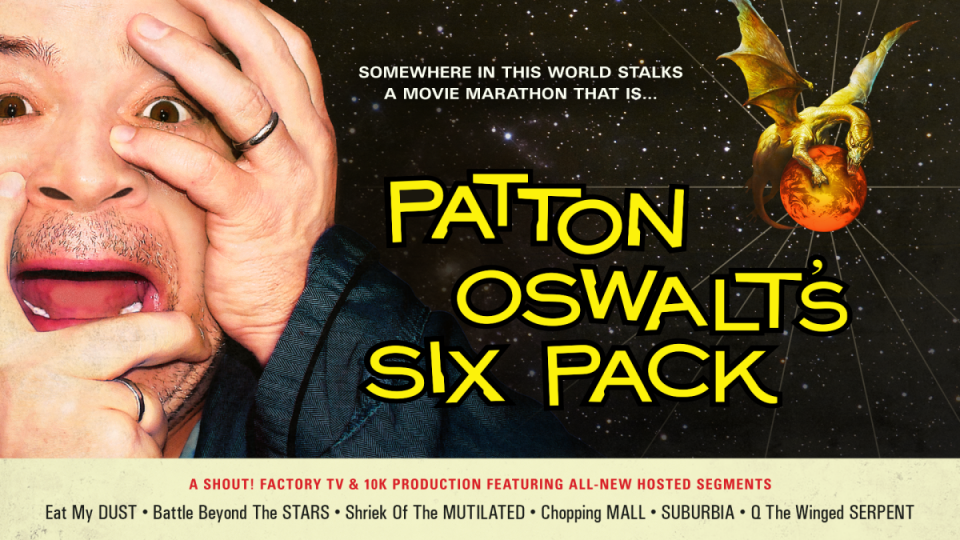 Patton Oswalt’s B-movie credentials have always been impeccable—this is the man who devoted an entire segment of his 2007 stand-up album Werewolves & Lollipops to Death Bed: The Bed That Eats, after all. And the cinephile comedian’s tastes in trash continue to impress, as Oswalt hosts a 12-hour movie marathon on Shout! Factory TV this weekend.

Billed as Patton Oswalt’s Six Pack Movie Marathon, the broadcast begins at 9 a.m. PT/12 p.m. ET on Saturday at ShoutFactoryTV.com, and features hosted segments and interstitials from Oswalt on the following films: Roger Corman’s shameless 1980 Star Wars rip-off Battle Beyond The Stars; the tongue-in-cheek ‘80s mall horror of Chopping Mall; Ron Howard revving his engines in the 1976 hicksploitation flick Eat My Dust!; Larry Cohen’s typically well-scripted Q: The Winged Serpent from 1982; Shriek Of The Mutilated (1974), which isn’t “good” in any sense, but c’mon, it’s a Bigfoot horror movie; and Penelope Spheeris’ narrative debut Suburbia (1983), which we would argue is actually a good movie.

“It is true what you have heard about me. I am a cinephile, but don’t think for a moment that I am a film snob,” Oswalt says in a press release. “There’s always something in every film, whether it’s a single shot, a performance, a stunt—every film contains something that is worth the experience. Together, we will find redemption for all six of my selections … or die trying. See you at the screen of your choice. BYO treats and no smoking in the balcony, kids.”

In honor of this 12-hour feast at the slop trough of cinema, we’re giving away a prize pack that includes:

To enter to win yours, email us at avcontests@theonion.com with the subject line “Six Pack” and your U.S. mailing address (sorry, no P.O. boxes) by 3 p.m. CT today, Thursday November 5, 2020. We’ll randomly pick a winner this afternoon and notify them by email.

And here’s the fine print on how to watch the marathon, via Shout! Factory:

COVID 19 impact How Technology will Help Rebuild the Construction Industry

Wellington Chocolate Factory: A Willy Wonka experience in the heart of Welly