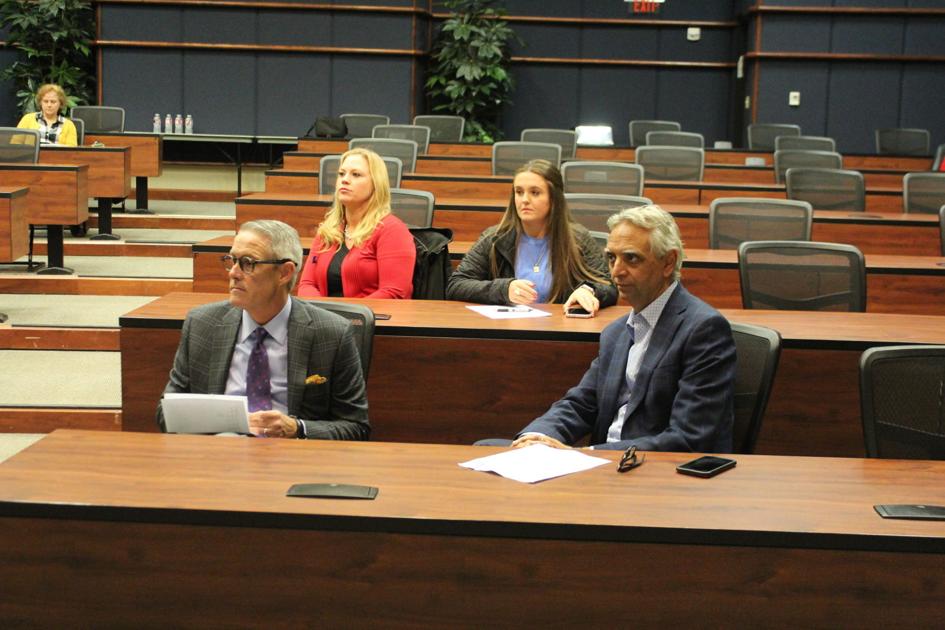 Local business owners are working on solutions to help solve supply chain issues that are affecting them and their customers.

Economic development experts said finding those solutions, including developing local supply chains, may be the best bet for resolving problems that continue to plague business owners even as the economy has begun to recover from the downturn caused by last year’s COVID-19 pandemic.

That discussion came late last week during a forum hosted by Cameron University’s Bill W. Burgess Jr. Business Research Center and the Lawton Fort Sill Chamber of Commerce. Solving the problem of getting goods and materials to businesses that, in turn, can get them to customers is crucial, said Business Research Center Director Syed Ahmed, explaining the lack of a reliable supply chain “remains a major roadblock on the path to economic recovery from the pandemic.”

Ahmed said the effects still can be felt in long wait times for materials that consumers want — especially materials that arrive on ships — to higher prices on the goods they are buying.

Chamber President Krista Ratliff said experts are predicting the dilemma may not be resolved until 2023, which is why many economic experts recommend that businesses diversify, in terms of identifying other routes for obtaining goods and materials.

Hossein Moini said some of his businesses have done just that. Moini is owner of Adventure Travel, Charley’s Grilled Subs and Cinnabon, and also is part-owner of Laugh Out Loud, an arcade in west Lawton. Laugh Out Loud and Charley’s have had to adjust their buying tactics to ensure a supply of items that allow them to operate.

It was difficult in the beginning, Moini said. Charley’s signature sandwich is a Philly Cheesesteak, which is why it was incredibly difficult to tell customers they couldn’t have one for several weeks, until steak shipments became more reliable.

“We know it’s our signature sandwich, but you really should get chicken,” Moini said, remembering how his employees responded to the crisis.

Then, there was the problem paper goods and eating utensils. Paper cups could be secured locally, but the issue was getting lids for those cups, especially the large ones.

“You couldn’t get lids,” Moini said, adding Cinnabons also had a problem finding the boxes it uses for its cinnamon rolls.

The businesses took action to help themselves. Moini said because Charley’s is a national chain, franchise holders are expected to adhere to company standards when using food items, such as condiments.

“The rules changed,” he said of the pandemic months and arrangements made to ensure goods needed for sandwiches continued to arrive. “We would go to the local grocery store.”

He and business partner faced the same issue at Laugh Out Loud. While there definitely was a problem with securing items to make their pizzas, to include paying a higher price for ingredients (the cost of pepperoni went up 18 percent), the men had to get creative when it came to the prizes awarded to those who play the arcade games. Moini said most of the prizes “were sitting on a ship in the middle of an ocean some place.” The solution?

“We look for those things locally now,” he said.

It doesn’t work for everything: Moini said he lives in fear of games breaking down because the parts for those machines are difficult to secure.

Phil Kenney, owner of Comanche Home Center/Ace Hardware and Carpet One, said he, too, has had to be creative — and patient — with problems caused by supply chain logjams.

He said the supply chain problem has been inconsistent in construction-related materials, with some (hardware) affect much more than others. While delays have begun to ease, he expects the problem to continue for a time.

“That’s my opinion,” he said, agreeing experts who predict the supply chain won’t straighten out before well into 2022 or 2023.

Kennedy cited some problems caused by the supply chain, to include windows. What used to take three weeks to ship now takes 16-20 weeks for delivery. Kennedy said the problem isn’t the glass, it’s the hardware needed for those windows, which is produced in China. He talked about one couple building a new home who was told their windows would arrive in eight weeks. That time kept bumping back, before the windows finally arrived 21 weeks later. That delay in delivery affected other parts of the construction project (bricking typically isn’t done until windows are installed and interior work is never done until the building shell is sealed). The builders had to make adjustments to make it work, Kennedy said.

He said finished goods also are an issue. While floor coverings such as rugs and tile are made domestically, the adhesive used to put them in place is not. Most of the glues are produced in China, Kennedy said, adding that “you have the top goods, but not the goods to fasten them to the floor.”

Kennedy said supply chain problems also contributed to the rising cost of materials. The cost of composite lumber quadrupled in price between June 2020 and May 2021, before setting back to about double its price the year before. The net effect of a new home price, based on increases in prices for steel, lumber, roofing materials and drywall, went from about $10 a square foot in June 2020 to $20 a square foot in May 2021. That price now is about $15 per square foot.

Coronavirus Outbreak Reveals the Weakest Links in the Supply Chain