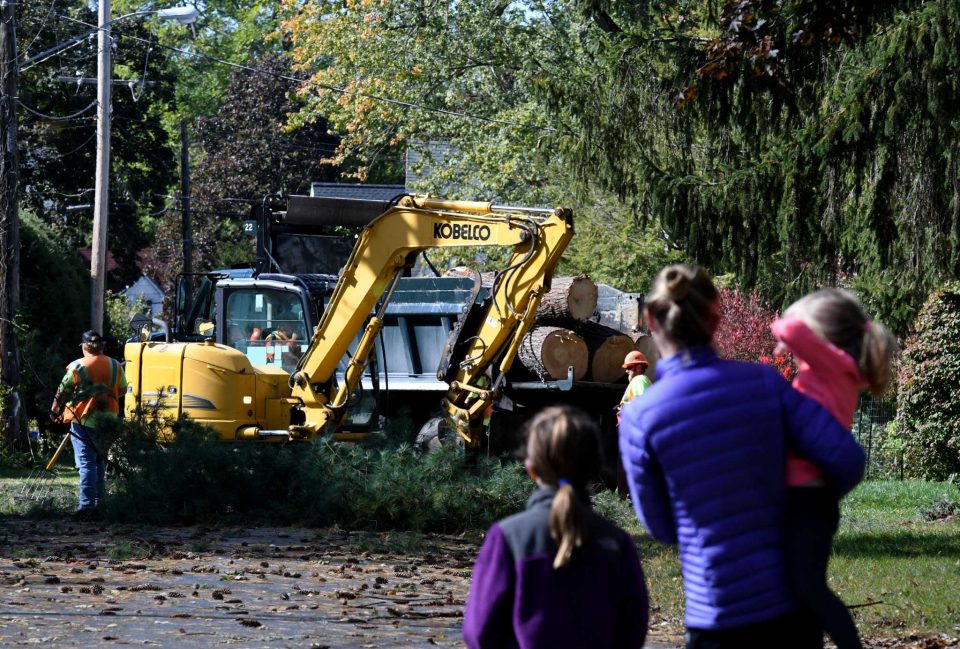 Under 10,000 National Grid customers in the Capital Region remain without power on late Saturday afternoon after a powerful storm uprooted trees and tore down power lines Wednesday, which initially left 160,000 area customers without power and caused two deaths.

The National Weather Service said an F-0 tornado touched down in Montgomery County in Canajoharie, producing 85 mph winds. But the storm that hit the immediate  Capital Region was a thunderstorm — not a tornado — and the 67 mph wind gust recorded at the Albany International Airport is the highest ever recorded for an October, according to the National Weather Service.

The outages are mostly in Albany and Rensselaer counties. New York State Electric & Gas is reporting no more outages in Rensselaer County and Saratoga County.

Click here to view a map of power outages in the Capital Region.

National Grid is distributing dry ice at the following locations on Saturday until 5 p.m.:

On Saturday morning, trucks with dry ice and National Grid workers could be seen outside the Crossgates Mall distribution location, but, unlike Friday morning, there was not a line of vehicles.

National Grid said a field force of more than 2,700 workers continues an around-the-clock cleanup and restoration effort. The utility noted late Friday that nearly 242,000 customers in the Capital Region and beyond that were affected by the storm.

Spokesman Patrick Stella said earlier this week the storm was the worst one the company has seen hit the Capital Region since Tropical Storm Irene in 2011.

City of Albany crews continue to work around the clock to clear downed trees and limbs and will continue to do so through the weekend. To report a downed tree or other non-life threatening emergency, call (518) 434-CITY (2489).

To assist in the clean-up effort, the Clifton Park Transfer Station will have expanded hours — noon to 4 p.m. Sunday, Oct. 11 — for yard waste and storm debris only. The station is for town residents only and IDs should be provided to the attendant upon arrival.

F-35 Jets To Compete Against French Rafales, Typhoons As US Approves Sale Of Its ‘Stealth Jets’ To Finland