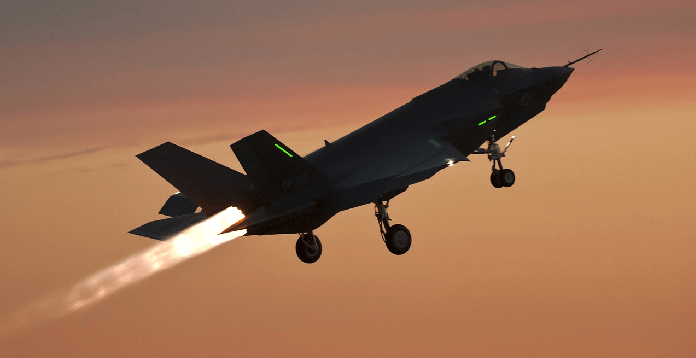 The race to pick a replacement for the Finnish Air Force’s (Ilmavoimat’s) current fleet of upgraded F/A-18C/D ‘legacy’ Hornets has two strong American competitors; Lockheed Martin F-35A Lightning II and a package for the Boeing F/A-18E/F Super Hornet and EA-18G Growler under the HX fighter competition.

Ride along with the F/A-18 #SuperHornet and #EA18G Growler as they fly to Finland for the #HXChallenge – the test and evaluation event being hosted by the @FinnishAirForce as they select their next fighter aircraft. #HXhanke pic.twitter.com/v3bR6JqSrX

The U.S. State Departmentmeanwhile has approved the sale of the F/A-18EF Super Hornet and F-35 Joint Strike Fighter to Finland, paving the way for the nation to purchase US jets should either Boeing or Lockheed Martin win its ongoing fighter competition.

After the U.S. Defense Security Cooperation Agency posted the notification of the potential sale, Finland’s Ministry of Defence released a statement clarifying that the announcement represents an important procedural step forward for the HX Fighter Program, but that negotiations with all competitors are ongoing.

“The announcement of the notification procedure does not constitute a procurement decision by Finland, as the decision to procure multi-role fighters will be made by the Government in 2021,” the statement said. “Furthermore, the types and quantities of multi-role fighters and weapons specified in the notification do not represent the final content of the Finnish procurement package; instead, the list published by the DSCA indicates those items and quantities that the US administration is prepared to sell at this stage of the procurement process.”

Along with two American offers, Helsinki will make a final decision after considering offers from European plane-makers: France’s Dassault, with the Rafale; the multinational Eurofighter consortium, offering the Typhoon, in a bid led by the United Kingdom; and Sweden, with the Saab JAS 39E/F Gripen, said a report in The Drive.

The F-35s will cost $12.5 billion for 64 conventional take-off and landing F-35A variants. The report said that the offer included the following air-to-air missiles, air-to-ground precision-guided munitions, subsystems, and components:

The report confirmed that no AIM-120 AMRAAM air-to-air missiles are included as Finnish Air Force is already equipped with the weapons.

On the other hand, the Boeing’s F/A-18E/F and EA-18G programs head Dan Gillian displayed confidence in his proposal in an interview with The Drive. “We think that’s a great combination for Finland given the threat environment they operate in,” he said, referring to the Nordic country’s increasingly tense relationship with Russia.

The winner of the HX competition will produce up to 64 fighters to replace Finland’s Boeing F/A-18C/D Hornets, which are expected to be retired by 2030. Instead of issuing a requirement for a particular number of aircraft with set capabilities, Finland is allowing the vendors to create packages of aircraft and weapons that best meet the Air Force’s operational needs — and the country’s budget.