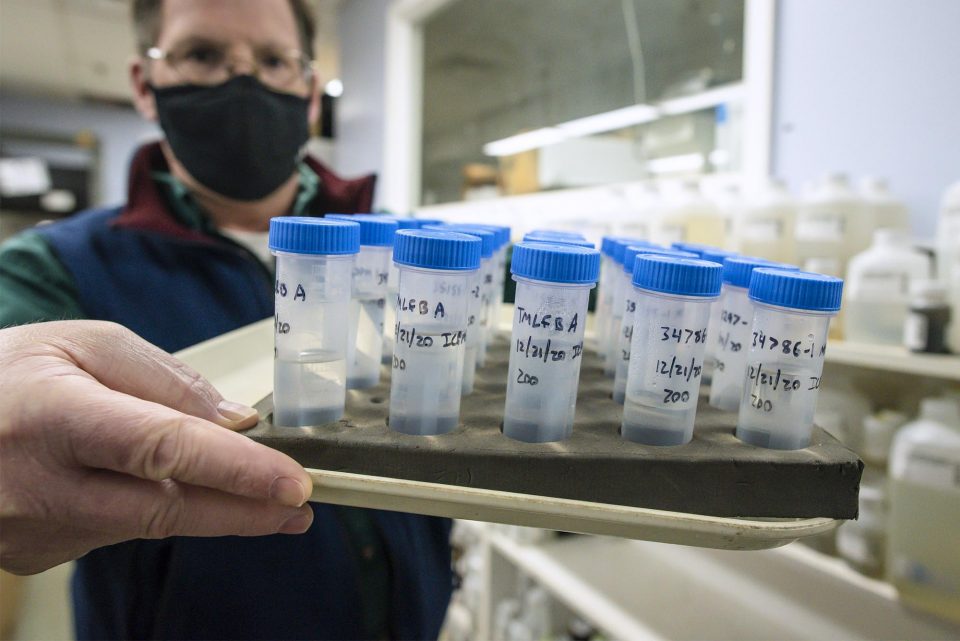 Vermont has new rules that require monitoring for toxic chemicals everywhere human septage is applied to the land.

Septage is the liquid and solid material pumped from a septic tank, cesspool, or other primary treatment source for human waste. Scum accumulates on the surface while the sludge settles at the bottom, totaling 20% to 50% of the total septic tank volume when pumped, according to the EPA.

Septage is commonly used as a fertilizer, and that’s one way to dispose of the material. But environmentalists worry about what’s in the septage, and how the quality of drinking water could be affected.

Regulators say the new rules ensure that levels of PFAS, the abbreviation for per- and polyfluoroalkyl substances, are monitored and kept to acceptable levels. According to the Vermont Public Interest Research Group, PFAS are toxic chemicals that have been widely used in industry and consumer products since the 1950s. They’re known as “forever chemicals” because of their long lifespan. PFAS have been shown to increase cancer risk and affect fertility and early childhood growth and development.

The rules, announced on Oct. 31, require testing soil, groundwater and the material itself that is being applied to the land. The frequency of testing will depend on the scope of the project, according to Eamon Twohig of the residuals management program within the Agency of Natural Resources.

For land application, it would entail annual testing for both groundwater and soil.

Tests have shown the presence of PFAS at locations where treated sewage sludge and septage have been applied. PFAS were present in high levels at seven out of 34 sites.

The new rules require anyone producing biosolids to test the material for PFAS.

VTDigger is underwritten by:

But Twohig was concerned that further restricting waste management systems — instead of tackling the source of the chemicals — would cause bigger problems.

“We can’t snap our fingers and make it all go away. If we continue to cut down on the management options, there won’t be places to take it,” Twohig said. “We’ve got to think of these systems holistically because if we decide we’re going to ban land application, what are we going to do with this material? We don’t have an incinerator in Vermont. The landfill doesn’t want it; they can’t take it all. So it’s a challenge.”

Stay out of the ocean

Until the 1980s, sludge was often dumped in the ocean, but new sludge and septage regulations — called the 503 rules by people in the field — halted that. The Environmental Protection Agency determined that human waste shouldn’t end up in the water, and instead looked to find a solution on land.

“The 503s give us a pathway to recycle that waste,” Twohig said.

Some environmentalists believe the 503s are outdated. They are calling for a complete overhaul of how the state deals with waste because they think it’s harmful to put human septage on the land.

PFAS are used in detergents and cosmetics, but perhaps are best-known for their water-resistant qualities that have made them popular in waterproof jackets, nonstick pots and pans, and firefighting foam. Because of firefighting drills, airports in Vermont have had some of the highest levels of PFAS.

But research from the Harvard School of Public Health has shown that much smaller concentrations of PFOA, one kind of PFAS, can lead to the development of pancreatic tumors. Researchers suggest that lifetime exposure to this type of PFAS should only be 0.1 parts per trillion.

Twohig said the material is usually used as fertilizer on farms, but it’s now being imported from other states, and the Department of Environmental Conservation is going to create a registry for biosolids coming into the state from elsewhere.

Some environmentalists, like James Ehlers, don’t think the state should allow importing the material at all.

“It’s better than bad, which is what it was before, but it’s still not good,” Ehlers said of the new rules. He’s an environmentalist who is advocating for tighter state regulations.

What’s in the chemicals?

Over 80,000 chemicals are currently registered for use with the Environmental Protection Agency. But many of these chemicals haven’t been tested for safety by any government agency. An EPA sludge survey from 2009 looked for pollutants and found 27 metals, plus steroids, pharmaceuticals and flame retardants.

VTDigger is underwritten by:

“The whole point of wastewater treatment is to keep these things out of the water. But we’re putting it right back on the soil, where it either, through the groundwater or surface runoff, winds right back up in the water,” Ehlers said.

Rep. Trevor J. Squirrel, D-Underhill, and Rep. Kari Dolan, D-Waitsfield, plan to push S.295 in the Legislature this year. The bill passed the Senate last year, but was ultimately delayed due to Covid. The bill aims to reduce sources of PFAS, as a more cost-effective measure than treating contamination.

Twohig said clean drinking water is a priority for the state. “We have looked at any water supplies within a quarter-mile of our land application sites where we’ve found PFAS and not seen any impacts to drinking water systems,” he said. Because Vermont is a small state, “we have the capacity to look at every single drinking water system.”

But some advocates say the state should be testing more frequently.

“They tested it once or a few times,” said Kai Mikkel Førlie, founder of Water-Wise Vermont, a group formerly known as Vermonters Against Toxic Sludge.

Both state officials and environmentalists say that, to solve the PFAS problem, Vermont must look to the industries that are producing these chemicals.

“Wastewater treatment plants, their primary function is to reduce pathogen loads, pretty much all they can do. Yet they stand as the dumping grounds for materials that industry should be forced to deal with but they’re not,” Førlie said.

Førlie recommends source-separating toilets, which divert urine into a separate tank from feces. Because urine is almost always sterile, separating it at the source — the toilet — means that it can then be used as a fertilizer. This is a project that the Rich Earth Institute in Brattleboro is currently undertaking, supported with grants from the EPA.

The new solid waste rules have delayed one land application permit in Fairfax, where residents were concerned about using septage to fertilize a farm field near the Lamoille River.

Twohig said the Department of Environmental Conservation ultimately decided not to issue the permit until new rules came later in the same month. Now that the rules have been issued, all the existing permits will be rewritten.

“We’ll get feedback from the permittees, and try to write a thoughtful permit that addresses the changes in the world,” Twohig said. “It’s an opportunity to improve upon the existing permits.”

Don’t miss a thing. Sign up here to get VTDigger’s weekly email on the energy industry and the environment.

An ‘ocean fund’ aims to scale up circular economy

Original Cheesehead Factory ramps up as for Packers fans